ORENINC INDEX down as financings dry up for holidays

ORENINC INDEX down as financings dry up for holidays 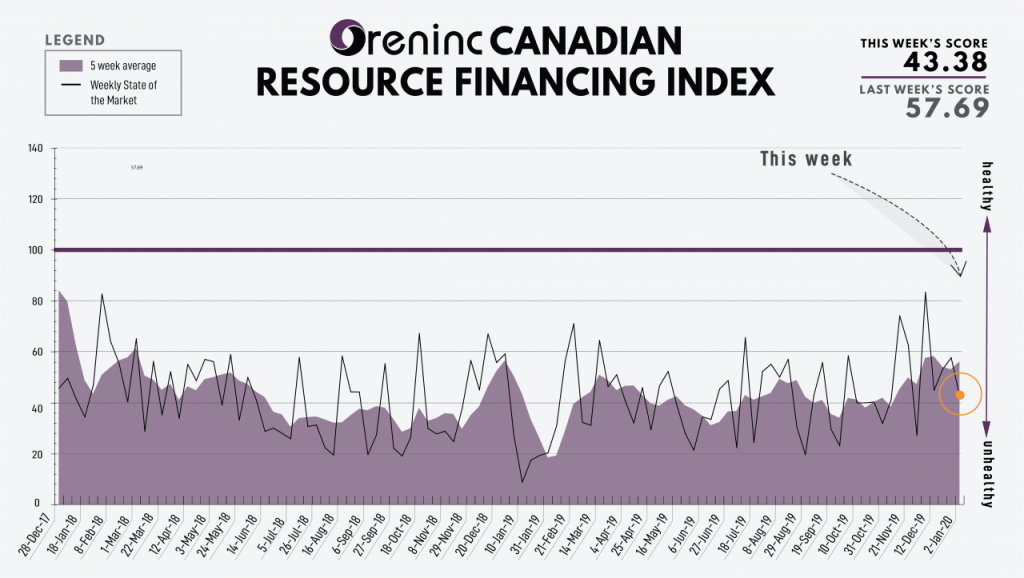 Oreninc will be attending the Vancouver Resource Investment Conference 19-20 January 2020. Find us at booth #1117. Please contact us if you would like a meeting.

A dramatic start to what promises to be a good year for precious and base metals with easing global trade tensions counterbalanced by increasing geopolitical tensions in the Middle East and Asia.

Tensions in the Middle East spiked after the US assassinated Iranian General Qassem Suleimani in a drone strike at Baghdad airport in Iraq. Suleimani, the second-most powerful person in Iran, was the leader of its elite Quds military organization and the director of its foreign policy in the region which has spread the country’s influence throughout several countries. Iran has said it will retaliate.

Immediate effects include the international coalition fighting Islamic State suspending anti-terrorist operations to focus on protecting the US, UK and other troops at bases in Iraq. The Iraqi parliament also passed a motion calling for the expulsion of some 6,000 US troops, which would effectively mean the country would come under the influence of Iran.

Iran also indicated it could resume work on its nuclear program and abandon the Iranian Nuclear trade deal, which Russia and the European Union have spent months trying to salvage, despite the US earlier walking away from it in favour of tighter economic sanctions.

The nuclear threat also ratcheted-up a notch in Asia, as North Korea threatened to resume nuclear and ICBM testing after its leader Kim Jong-un said he would end the suspension of nuclear and long-range missile tests put in place during talks with the US. Kim also said his country would soon introduce “a new strategic weapon”.

On the trade front, the US and China have agreed on a phase one deal to resolve their tariff war with a signing to occur in mid-January. The deal requires China to purchase some $200 billion worth of US products over the next two years, as well as stepping up efforts to counter intellectual property theft and technology transfer. For its part, the US agreed to reduce tariffs on Chinese goods although duties will continue to be levied against $380 billion of its products.

The central bank in China also reduced the reserve ratio for commercial banks by 50 basis points to improve liquidity, which released about 800 billion yuan (US$115 billion) for lending.

Para Resources (TSX-V:PBR) arranged a non-brokered private placement for gross proceeds of up to C$5 million.