O3 Mining Inc. (TSX-V: OIII) (OTCQX: OIIIF) is pleased to provide an update on its fully-funded 250,000 metre drilling program at its Marban and Alpha properties in Val-d’Or, Québec, Canada which seeks to convert, expand, and discover new gold resources. The company is reporting nine holes in this release drilled in and around the Marban open-pittable deposits.

A 3D-model of the Marban project is available on the Company’s website at: https://o3mining.com/presentations/drill-results

The company continues to extend gold mineralization with the potential to increase resources within trucking distance of the planned Marban processing infrastructure as stated in the Preliminary Economic Assessment released on September 08, 2020. The PEA outlined production of 115,000 ounces a year for more than 15 years following an initial capital expenditure of C$256 million.

O3 Mining’s President and Chief Executive Officer, Mr. Jose Vizquerra commented; “We continue to add value to our shareholders through our aggressive drilling program. Today’s results combined with our previously reported results within the open-pittable areas on June 1st, 2021 further show our potential to expand the open pits at Marban and ultimately increase the existing resource. Drilling will continue to seek to expand the size of these areas as well as expanding Marban mineralization at depth”.

The drilling highlights consists of a stockwork of quartz veinlets with disseminated pyrite within intermediate and mafic dykes as well as a basaltic unit within the hanging wall of the Norbenite Shear. This geology is consistent with the description of the mineralized zones of the historical mines in and around the Marban property. 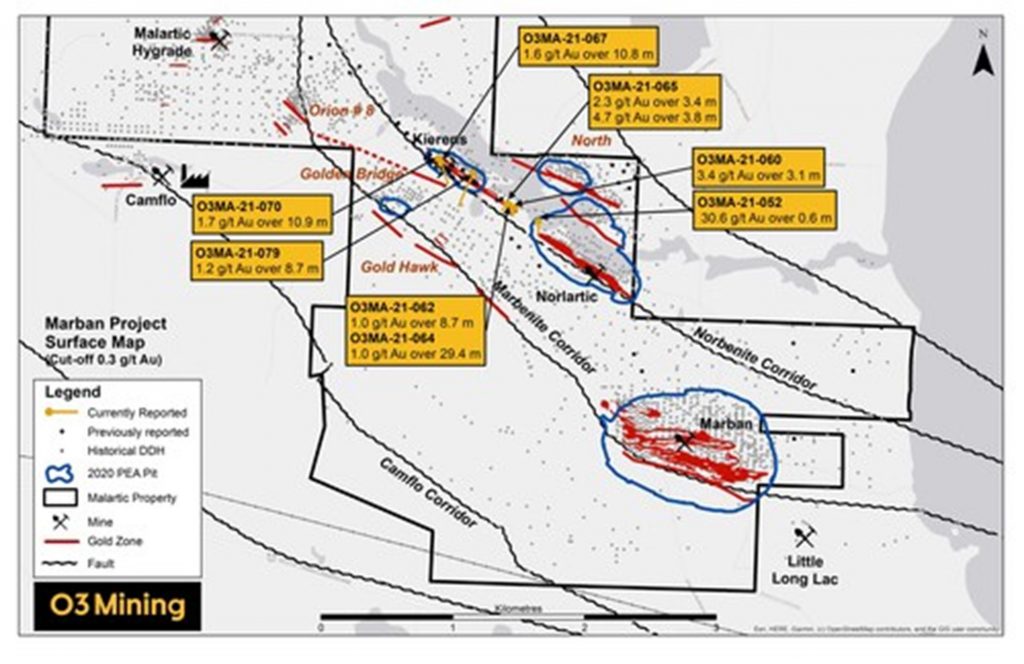 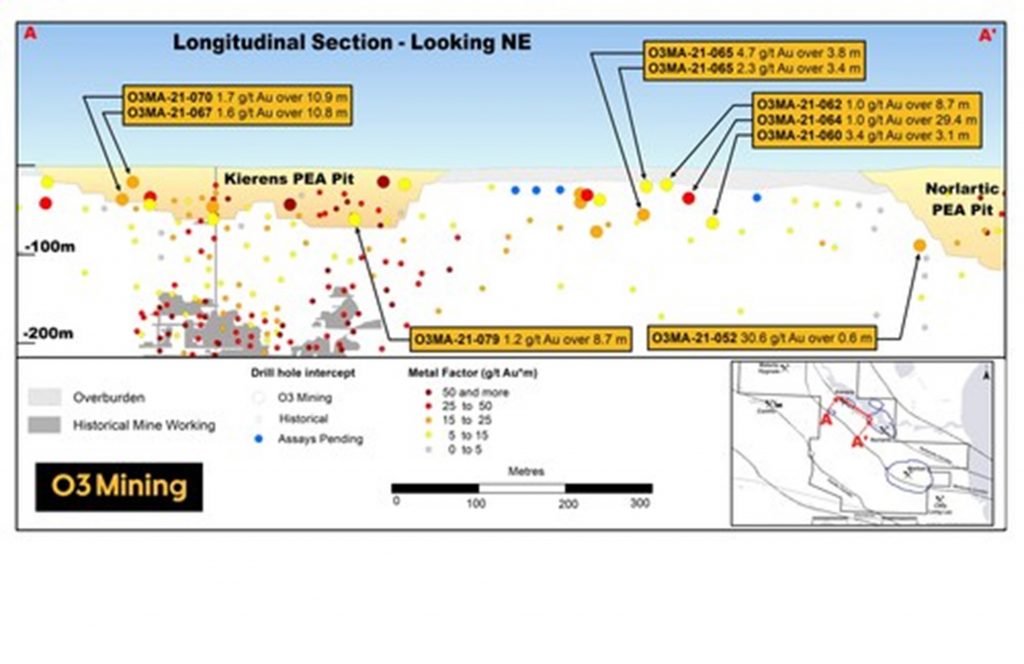 The Corporation drilled 86,000 metres during 2019 and 2020 on its Val-d’Or properties testing for Potential Economic Material with 100-metre step-outs aiming to expand current resources of 2.4 million ounces measured and indicated (62.0 Mt @ 1.22 g/t Au)1 and 1.5 million ounces inferred (20.2 Mt @ 2.27 g/t Au)1 and make new discoveries. O3 Mining expects to release more drilling results from its 2021 winter program at Alpha within the next few weeks. 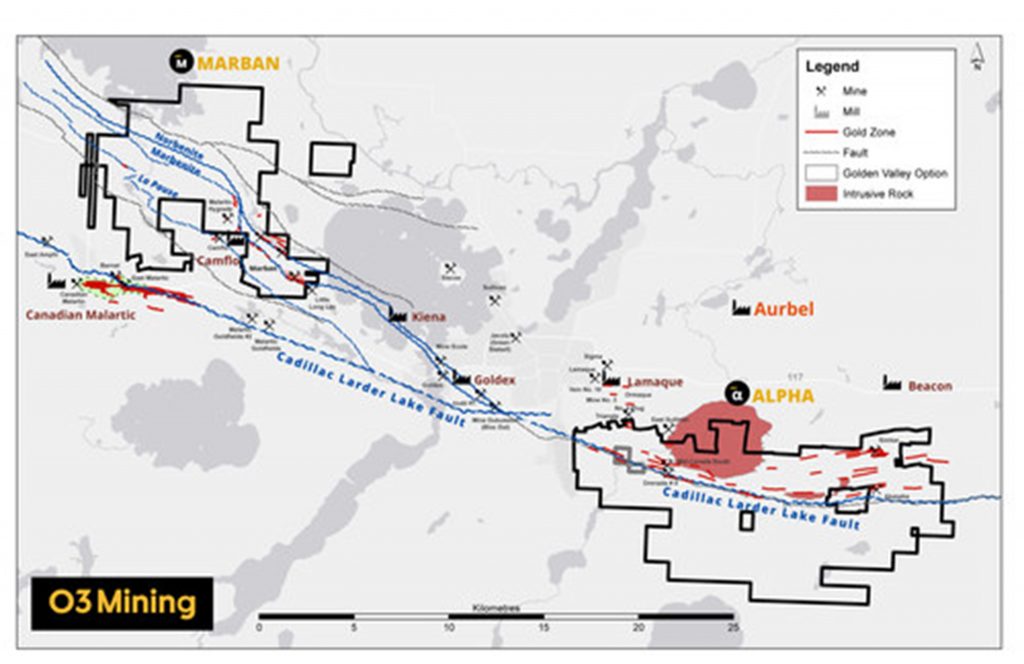 Drilling at Marban has focused on expanding mineralization in and outside of the proposed PEA pit areas, as well as discovering new mineralization for an underground mining scenario. An 80,000 metre drill program is being executed this year, with 27,640 metres drilled so far. There will be up to eight drill rigs testing for PEM, as well as, aiming to convert resources from Inferred to Measured and Indicated, to ultimately become part of Marban’s maiden mineral reserve.

Drilling at Alpha is at an earlier stage than at Marban and has focused on grassroots exploration, deposit delineation, and resource expansion. A 56,000 metre program is being executed this year with  38,001 metres completed year to date. O3 Mining will have up to three drill rigs testing for new discoveries using its PEM drilling strategy as well as focusing on deposit delineation and expansion of the current resource. Drilling results from Alpha will be released in the coming weeks as soon as assay results become available.

True width determination is currently unknown but is estimated at 65-80% of the reported core length interval for the zones. Assays are uncut except where indicated. Intercepts occur within geological confines of major zones but have not been correlated to individual vein domains at this time. Half-core samples are shipped to Agat laboratory in Val-d’Or, Québec, and Mississauga, Ontario for assaying. The core is crushed to 75% passing -2 mm (10 mesh), a 250 g split of this material is pulverized to 85% passing 75 microns (200 mesh) and 50 g is analyzed by Fire Assay (FA) with an Atomic Absorption Spectrometry (AAS) finish. Samples assaying >10.0 g/t Au are re-analyzed with a gravimetric finish using a 50 g charge. Commercial certified standard material and blanks are systematically inserted by O3 Mining’s geologists into the sample chain after every 18 core samples as part of the QA/QC program. Third-party assays are submitted to other designated laboratories for 5% of all samples. Drill program design, Quality Assurance/Quality Control, and interpretation of results are performed by qualified persons employing a QA/QC program consistent with NI 43-101 and industry best practices.