Cordoba Minerals Corp. (TSX-V: CDB) (OTCQB: CDBMF) today reported results from an independent Preliminary Economic Assessment for its San Matias Copper-Gold-Silver Project in Colombia. The PEA was prepared by Nordmin Engineering Ltd. of Thunder Bay, Ontario, and includes revisions to the June 2019 San Matias Mineral Resource estimate that was completed by Nordmin (refer to Cordoba’s news release dated July 3, 2019). All amounts are in United States dollars, unless otherwise stated. Summary results of the PEA are shown below in Table 1.

“We believe we have demonstrated a very robust project at San Matias through the PEA work completed by Nordmin.” stated Eric Finlayson, President and CEO of Cordoba. “The Alacran deposit, with its significant copper, gold and silver grades and low strip ratio, remains the cornerstone of the Project, supplemented by the later addition of mill feed from the Montiel East, Montiel West and Costa Azul pits. This is only the beginning for San Matias, and we will continue to explore our highly prospective copper and gold targets within the region.”

The San Matias Copper-Gold-Silver Project is located in the municipality of Puerto Libertador, Department of Córdoba, Colombia, and is approximately 200 kilometres north of Medellín. The site is road accessible from the town of Puerto Libertador, approximately 20 kilometres away. The PEA outlines a conventional open pit mining operation consisting of a main open pit mine at the Alacran deposit and three smaller open pit mines at the Montiel East, Montiel West and Costa Azul satellite deposits. The PEA includes a centralized processing plant and TMF located directly adjacent to the Alacran pit. The site layout is shown below in Figure 1.

The PEA includes employment for 290 personnel during the first 5 years of expected production and increasing to 355 personnel for the remaining 18 years.

Cordoba holds exploration licences covering 149 square kilometres and has an additional 2,491 square kilometres of exploration licenses under application. Cordoba is working to complete the Mining Technical Work Plan (Programa de Trabajo y Obras or “PTO”) and the Environmental Impact Assessment (“EIA”) for the Alacran deposit, required prior to receiving approvals to begin construction.

The PEA envisions that the Alacran and satellite pits will be mined using conventional drill, blast and shovel/truck open pit mining methods. The PEA assumes mining activities will be performed by a contractor-owned mining fleet for Years 1 to 5 of operation and switching to an owner-operated fleet in Year 6 and onward.

Mining at the Alacran pit is planned to initially target the high-grade, low-waste strip blocks located in the centre of the deposit. Three small pushbacks are planned within the first five years of the operation to ensure consistent high-grade resources are being fed to the mill and maximizing NPV. During the first five years, copper, gold and silver grades are expected to average 0.67%, 0.30 g/t and 3.74 g/t respectively with a low strip ratio of 0.82:1 including pushbacks. An additional three pushbacks are planned in the remaining life of mine for the Alacran pit. The deposit is situated along a ridgeline, which reduces the overall strip ratio and allows for minimal re-ramping in the pushbacks. Alacran pit outlines are shown below in Figure 2.

In the PEA, mining activity at the Alacran pit is projected to be reduced in Year 17, at which point part of the mining fleet is planned to start mining the satellite deposits at the Montiel East, Montiel West and Costa Azul pits. The PEA assumes that these smaller, satellite open pits will be mined simultaneously in order to provide a sustainable supply of mill feed and increase operational flexibility. During Years 17 to 23, 8,000 tpd of mill feed is expected from the Alacran pit complemented by 8,000 tpd from the satellite pits.

The PEA calls for saprolite rock to be mined and a portion of this material to be stockpiled in order to maintain a set rate of blending with fresh rock prior to being processed through the mill. 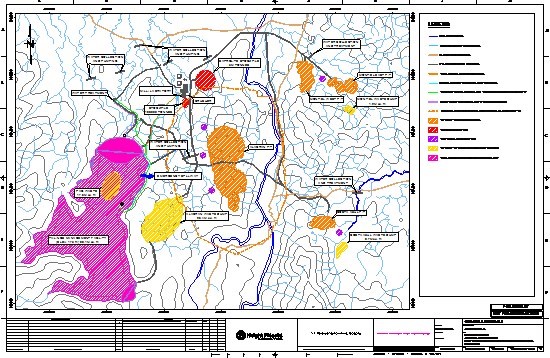 Figure 2: Progressive PEA pit outlines at the Alacran mine 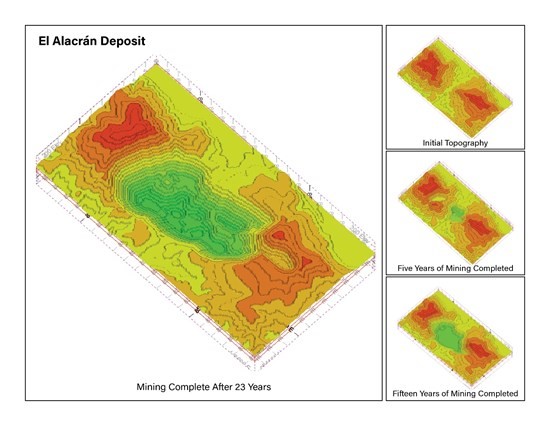 The process plant has been designed as a conventional milling operation with an initial nameplate capacity of 8,000 tpd, increasing to 16,000 tpd following a planned processing plant expansion completed at the beginning of Year 6. The conceptual plant design includes a gravity separation circuit for initial precious metals recovery prior to a conventional froth flotation circuit. The PEA assumes that the plant will produce gold-silver doré bars on site and a copper concentrate containing the remaining precious metals by-products. The copper concentrate is expected to contain very low levels of deleterious elements, such as arsenic and lead.

Based on preliminary metallurgical test work completed on fresh rock and recent test work to predict recovery performance of upper (oxidized) zones, the overall copper recovery is expected to average 78.6%. Gold and silver recoveries for the overall process are expected to average 74.4% and 65.5% respectively. Further metallurgical test work is recommended to optimize recoveries and confirm the validity of a doré producing circuit from the Ball Mill cyclone underflow. Copper concentrate output is expected to be approximately 280 to 300 tpd for the first five years of operation, increasing to approximately 560 to 600 tpd thereafter.

The PEA envisions that the road access to the San Matias site will be improved to the town of Puerto Libertador to allow for increased movement of equipment and materials to and from site. Any doré produced is expected to be flown out through the Puerto Libertador airport located approximately 20 kilometres away, and copper concentrate is planned to be loaded on-site and transported by 60-tonne trucks to port facilities at Tolu (approximately 250 kilometres away) or Cartagena (approximately 400 kilometres away) for export to international smelters. Both ports currently support the export of ferronickel from South 32’s Cerro Matoso nickel mine.

The PEA envisions that the TMF will be located in Concepción Creek valley, approximately 1.5 kilometres west of the Alacran open pit and will be designed to contain a maximum of 156 million tonnes of tailings and waste rock material. The initial TMF is designed to contain 43 million tonnes of tailings material and waste rock. Dam raises are planned for Years 9, 14 and 18 of operations. The foundation materials in the valley generally consist of low permeability saprolite lying over low permeability bedrock. The Final Dam is planned to be constructed using non-potentially acid generating waste rock from open pit mining operations to develop the expanded valley type impoundment.

The PEA calls for the upstream face of the Final Dam to be lined with a geosynthetic lining system to minimize seepage from the TMF. The PEA envisions that a foundation drain will be installed in the base of the Final Dam to collect any potential seepage. The Final Dam in the conceptual TMF will be raised in several stages using the downstream construction method and conventional tailings slurry will be conveyed from the plant via a pipeline. Waste rock will be hauled and placed in the TMF basin by the mine haul trucks and a dozer. In the conceptual TMF, the tailings slurry will be sub-aqueously discharged from multiple locations along the dam crests and around the perimeter of the TMF basin to evenly fill the impoundment. The potentially acid generating (“PAG”) waste rock is expected to be strategically placed within the TMF basin such that the tailings and supernatant pond will cover and maintain the PAG waste rock in a saturated state within 6 months of the waste rock being placed in the TMF.

The PEA envisions that the TMF will have a permanent water cover over the tailings and waste rock to keep the waste submerged. A floating pump barge is to be installed at start-up to reclaim process water from the TMF to the plant for reuse in the process. The TMF concept includes freeboard to temporarily store runoff resulting from the Environmental Design Storm and a spillway to safely pass the peak flows resulting from the Inflow Design Flood.

It is expected that the TMF will operate in a water surplus during the wet season and that supernatant water will need to be treated, as required, and discharged over a portion of the year.

The initial capital expenditures for the Project total $161.4 million, which include site preparation, construction of the processing plant and TMF, road upgrades and other infrastructure. It is expected that site construction will occur over a 3-year pre-production period. The PEA assumes that mobile mining equipment will be supplied by the mining contractor and operated for the first 5 years of operations, after which the equipment will be bought out and converted to an owner-operated mining fleet beginning in Year 6.

An expansion of the mine, mill and processing facilities is planned to be completed in Year 6 and is expected to cost $120.6 million, including $46.6 million for the purchase of the owner-operated mine fleet (including contingency). The Year 6 expansion is expected to increase the nameplate capacity of the San Matias plant from 8,000 tpd to 16,000 tpd. A breakdown of the PEA life of mine capital expenditures is shown in Table 3 below.

A 2% royalty on the Net Income for Production is payable to Sociedad Ordinaria de Minas Omni.

The San Matias PEA prepared by Nordmin estimates LOM revenue totalling $3.8 billion using metals price assumptions of $3.25 per pound copper, $1,400 per ounce gold and $17.75 per ounce silver. A USD/COP foreign exchange rate of 3,125:1 has been applied. A breakdown of revenue by metals is shown in Table 4. 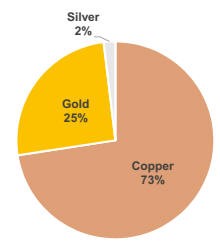 The Project’s economics are sensitive to input metals prices, discount rate and cost assumptions as shown in Table 5, 6 and 7 below.

The San Matias Copper-Gold-Silver Project as described in the PEA is based on 119.1 million tonnes of modeled mill feed grading 0.45% copper, 0.26 g/t gold and 2.41 g/t silver. Nordmin has prepared an updated Mineral Resource estimate for the pit-constrained resources following a more detailed study of the cost parameters and inputs used when completing the PEA study.

Sections through the Alacran block model and plan view are shown in Figure 3 and 4.

Cordoba has identified additional opportunities to enhance the overall project economics, including:

Potential also exists for the discovery of the porphyry sources for the Alacran and Montiel West deposits and for other deposits within the San Matias Project area.

The PEA is preliminary in nature and includes Inferred Mineral Resources that are too speculative geologically to have economic considerations applied to them that would enable them to be categorized as Mineral Reserves. There is no certainty that the results of the PEA will be realized.

The PEA was independently prepared by Mr. Glen Kuntz, P.Geo. and Ms. Agnes Krawczyk, P.Eng., both of Nordmin, who are considered “Qualified Persons” under National Instrument 43-101 Standards of Disclosure for Mineral Projects. The technical disclosure in this news release is based upon the information in the PEA prepared by or under the supervision of Mr. Kuntz and Ms. Krawczyk.

The technical information in this release has been reviewed and verified by Mr. Glen Kuntz, P.Geo., a “Qualified Person” for the purpose of National Instrument 43-101.

After-tax results were calculated by Cordoba’s management team and are not considered independent.

The Company will file a technical report prepared in accordance with National Instrument 43-101 on www.sedar.com within 45 days of this news release.

Cordoba Minerals Corp. is a mineral exploration company focused on the exploration and acquisition of copper and gold projects. Cordoba is exploring the San Matias Copper-Gold-Silver Project, which includes El Alacrán deposit and satellite deposits at Montiel East, Montiel West and Costa Azul, located in the Department of Cordoba, Colombia. Cordoba also holds a 25% interest in the Perseverance porphyry copper project in Arizona, USA, which it is exploring through a Joint Venture and Earn-In Agreement.