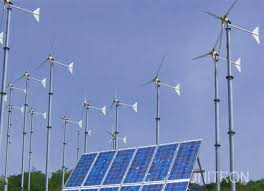 Advocates of nuclear energy have long been predicting its renaissance, yet this mode of producing electricity has been stalled for years. Renewable energy, by contrast, continues to expand rapidly, even if it still has a long way to go to catch up with fossil fuel power plants, writes Worldwatch Institute Senior Researcher Michael Renner in the Institute’s latest Vital Signs Online analysis.

Following a rapid rise from its beginnings in the mid-1950s, global nuclear power generating capacity peaked at 375.3 gigawatts (GW) in 2010. Capacity has since declined to 371.8 GW in 2013, according to the International Atomic Energy Agency. Adverse economics, concern about reactor safety and proliferation, and the unresolved question of what to do with nuclear waste have put the brakes on the industry.

In stark contrast, wind and solar power generating capacities are now on the same soaring trajectory that nuclear power was on in the 1970s and 1980s. Wind capacity of 320 GW in 2013 is equivalent to nuclear capacity in 1990. The 140 GW in solar photovoltaic (PV) capacity is still considerably smaller, but growing rapidly.

In recent years, renewable energy has attracted far greater investments than nuclear power.  According to estimates by the International Energy Agency (IEA), nuclear investments averaged US$8 billion per year between 2000 and 2013, compared with $37 billion for solar PV and $43 billion for wind. Individual countries, of course, set diverging priorities, but nowhere did nuclear have a major role in power generation investments.

In contrast with investment priorities, research budgets still favor nuclear technologies. Among members of the IEA (most European countries, the United States, Canada, Japan, South Korea, Australia, and New Zealand), nuclear power has received the lion’s share of public energy research and development (R&D) budgets during the last four decades. Nuclear energy attracted $295 billion, or 51 percent, of total energy R&D spending between 1974 and 2012. But this number has declined over time, from a high of 73.6 percent in 1974 to 26 percent today. Renewable energy received a cumulative total of $59 billion during the same period (10.2 percent), but its share has risen year after year.

Because wind and solar power can be deployed at variable scales, and their facilities constructed in less time, these technologies are far more practical and affordable for most countries than nuclear power reactors. Worldwide, 31 countries are operating nuclear reactors on their territories. This compares to at least 85 countries that have commercial wind turbine installations.

The chances of a nuclear revival seem slim. Renewable energy, by contrast, appears to be on the right track. But it is clear that renewables have a long way to go before they can hope to supplant fossil fuels as the planet’s principal electricity source. The expansion of sources like wind and solar will have to become even more rapid in order to stave off climate disaster, and that in turn means that their fate cannot be left to the whims of the market alone.