Vizsla President and CEO Michael Konnert commented: “In only thirteen months since the discovery of the Napoleon Vein, the zone has grown considerably, now representing a large panel of continuous mineralization over 1,000m long with excellent grades over potentially minable widths. With increased grades and thickness developing down-plunge to the south, Napoleon continues to be the primary focus for resource delineation at Panuco and will no doubt form the backbone of the Company’s maiden resource estimate planned for Q1, 2022.” 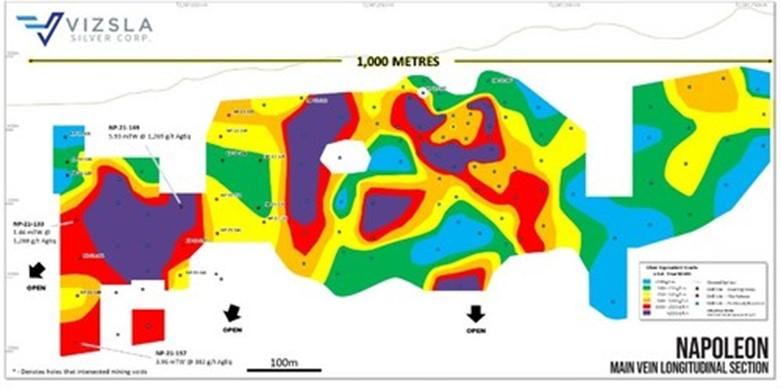 Figure 1: Longitudinal section from the main Napoleon prospect with all holes labelled and selected intersections shown. 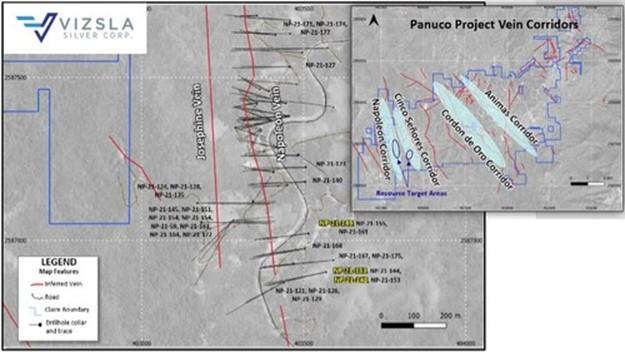 Recent drilling at Napoleon has locally extended the body of mineralization within an interpreted shallowly plunging panel to the south.  Most of the newly reported holes are from the southern end of the mineralized zone and continue to show a wide vein with very high grades.

Step-out drill holes NP-21-133,142 and 157 were successful in extending the Napoleon Vein by 50 metres to the south along strike and down plunge from the previously reported fence of holes. Mineralization remains open to the south and at depth and continues to be the Company’s primary focus for resource drilling.

Additionally, systematic grid drilling on 50 metre centers has now largely infilled the remaining untested areas to the north, highlighting a continuous zone of mineralization. In total, mineralization is defined over a strike length of 1,000 metres and to a depth of 370 metres.

To date, 105 holes completed within the Napoleon resource area highlight an average vein width of 3.5 metres with a weighted average grade of 482g/t AgEq (161 g/t silver, 3.11 g/t gold, 0.45% lead and 1.3% zinc). This represents a 9% increase in weighted average grade and a 0.5 metre reduction in average width since the last update (see press release dated April 6, 2021). Average weighting does not include grade capping, total length and depths are estimations and all holes are included resulting in inclusion of potentially non-economic material.

An average specific gravity of 2.72 has been calculated from 49 samples after rejecting outliers.

Relative to the last update, both silver (155 to 161 g/t) and gold (2.74 to 3.11 g/t) grades have increased, with the later largely attributable to a significantly higher gold/silver ratio observed at the southern end of the resource drilling area.

Moving forward, Vizsla will complete wider, 100 metre step-out holes in this area to better define the potential edge of mineralization. This will allow for more spatial data to be incorporated into the Project’s resource database ahead of the drilling cut-off date for inclusion in the maiden resource estimate (planned for Q1, 2022).

The newly consolidated Panuco silver-gold project is an emerging high-grade discovery located in southern Sinaloa, Mexico, near the city of Mazatlán. The 9,386.5-hectare, past producing district benefits from over 75 kilometres of total vein extent, a 500 ton per day mill, 35 kilometres of underground mines, tailings facilities, roads, power and permits.