Vizsla President and CEO Michael Konnert commented: “Napoleon is rapidly growing into a large body of mineralization with excellent widths and high grades. This area is the primary focus of our exploration, and with four rigs on the greater than two-kilometre-long vein, we can look forward to more results that may extend the strike and depth of this vein. Recent drilling has been larger step-outs, and significant intercepts to the north and south suggest Napoleon will continue to grow. The Panuco silver district is impressive, and today’s results demonstrate the significant potential of these vein corridors. Vizsla is well-funded and aggressively unlocking value with eight rigs turning right now.” 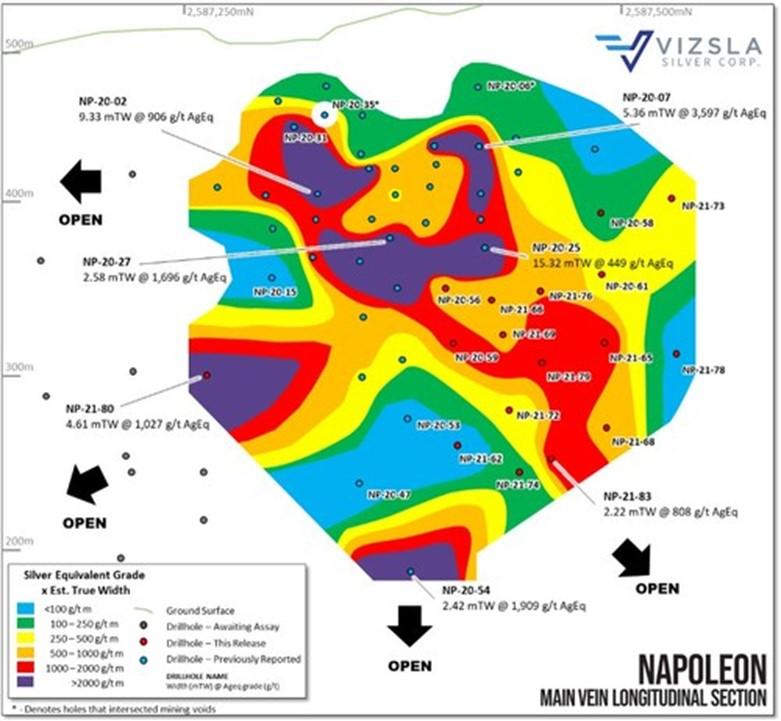 Figure 1:         Longitudinal section from the main Napoleon prospect with all holes labelled and selected intersections shown.

Recent drilling at the main Napoleon zone along the Napoleon Vein Corridor has extended the body of mineralization within a plunging shoot to the north.  Better intercepts include hole NP-21-83 which drilled 2.22 metres true width at 808 g/t silver equivalent and the zone remains open to expansion in this direction.

The previously defined southern end of mineralization has been affected by a post mineral fault, the Blucher Fault, that tears the vein apart (most notable in holes NP-20-15, NP-20-47, NP-20-53 and NP-20-62).  Drillholes NP-20-54 and NP-21-80 have intersected excellent widths and grades to the south and beneath this fault and open-up the body of mineralization in these directions.  Hole NP-21-80 intersected 4.61 metres true width at 1,027 g/t silver equivalent.  The Company has completed eight additional holes in this area that have intersected the vein and assays remain outstanding.

Deeper drilling continues to intersect high silver and gold grades.  Typical Intermediate Sulphidation vein systems in Mexico transition to become base metal rich, with lower grades of silver and gold at depth.  This indicates to company geologists that the body of mineralization can continue well beyond the depths of the current drilling.  Previously reported hole NP-20-54 is the deepest drilled to date and intersected 2.42 metres true width at 1,909 g/t silver equivalent.

The Company has four drill rigs active along the Napoleon Vein Corridor with two solely focused on resource drilling on the main Napoleon zone.  Two rigs are undertaking step-out exploration to the north and to the south of the main zone.

Table 1:           Downhole drill intersections from the holes completed at the Napoleon Zone on the Napoleon Vein Corridor.  Hole numbers are non-sequential due to additional drilling along the vein corridor, every hole with assays received has been reported. Estimated true widths are only calculated for the Main Vein. 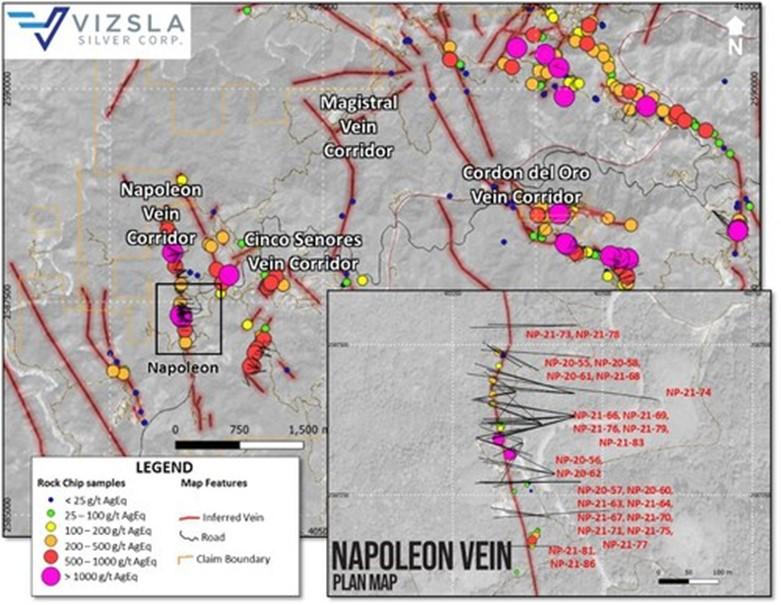 The Company’s disclosure of technical or scientific information in this press release has been reviewed and approved by Martin Dupuis, P.Geo., Vice President of Technical Services for Vizsla. Mr. Dupuis is a Qualified Person as defined under the terms of National Instrument 43-101.