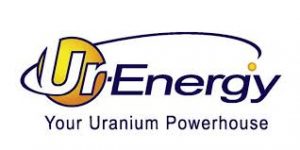 Ur-Energy anticipates using the net proceeds from the offering to maintain and enhance operational readiness; additionally, proceeds may be used for working capital and general corporate purposes. The securities described above are being offered by Ur-Energy pursuant to a shelf registration statement on Form S-3 previously filed with and declared effective by the Securities and Exchange Commission (the “SEC”) on August 3, 2017.  A prospectus supplement and the accompanying prospectus relating to the securities being offered have been filed with the SEC and are available on the SEC’s website at http://www.sec.gov. Copies of the final prospectus supplement and accompanying prospectus may be obtained from Cantor Fitzgerald & Co., Attention: Capital Markets, 499 Park Ave., 6th Floor, New York, New York 10022 or by e-mail at prospectus@cantor.com.

Ur-Energy is a U.S. uranium mining company with corporate and operations offices in Denver, Colorado, and Casper, Wyoming, respectively. Ur-Energy operates the Lost Creek in-situ recovery uranium facility in south-central Wyoming. Ur-Energy has produced, packaged and shipped more than 2 million pounds from Lost Creek since the commencement of operations. Applications are under review by various agencies to incorporate Ur-Energy’s LC East project area into the Lost Creek permits, and the company has begun to submit applications for permits and licenses to construct and operate its Shirley Basin Project. Ur-Energy is engaged in uranium mining, recovery and processing activities in the United States, including the acquisition, exploration, development and operation of uranium mineral properties.