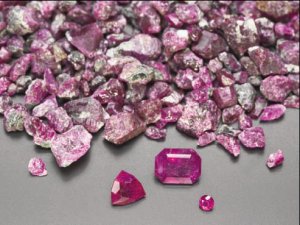 True North Gems Inc. (TSX VENTURE:TGX) is pleased to announce the signing of an Option and related agreements with LNS Greenland A/S. The most material component of the partnership enables LNSG to earn 20% of the issued and outstanding Class A shares of True North Gems Greenland A/S in exchange for approximately US$23 million – the majority of the Aappaluttoq Mine capital costs.

The five individual agreements lay out the strategic partnership structure for the future construction and operation of the Aappaluttoq Ruby Project in SW Greenland. The Letter of Intent announced on November 12, 2012 formed the framework for, and has now been replaced by, these definitive agreements.

“We are delighted to formalize our strategic partnership with LNS-Greenland,” stated Nicholas Houghton, President and CEO of True North. “These agreements show our commitment to source jobs locally and use existing Greenlandic expertise wherever possible; this will be especially important as we move forward through the public hearing process.”

Finn Mortensen, Chairman of LNS Greenland A/S said “We feel that our extensive logistical and operating experience in Greenland, together with True North’s gemstone expertise, will be beneficial for all parties.”

Under the terms of the Option Agreement, and subject to granting of the exploitation permit by the Greenland Government, the parties will be required to contribute to TNGG and fund as follows:

Based on prior economic studies, LNSG would contribute approximately US$23 million for:

LNSG will be reimbursed for the capital cost of the ore circuit building and the Nuuk sorting facilities, but will assume any capital cost variation risk associated with their portion.

Under the Option Agreement, the Company would contribute:

The relationship between the Company and LNSG will be governed by the four additional agreements that were executed at the same time as the Option Agreement.

Under the terms of the Lease and Purchase Agreement which becomes effective once commercial production has been achieved, LNSG will retain ownership of the ore storage facility, the two port facilities, mine operations camp, workshop, site roads, power plant, and the fuel and explosive storage facility . TNGG will lease the LNSG Assets for a nine year period with a fully credited right to buyout the lease and purchase the LNSG Assets at any time, less prior payments. Total lease payments over the nine year period are fixed at 68 million DKK (approximately US$12 million).

Under the terms of the Management Agreement which also becomes effective upon commercial production, LNSG will retain contracted responsibility for mine and infrastructure operations at the Aappaluttoq site, while True North will retain the contracted responsibility for international gemstone marketing, site security, quality control, operations in Nuuk, and exploration. Both LNSG and True North will charge TNGG on a cost plus basis for their contracted activities.

Under the Pledge Agreement True North has pledged the Class A TNGG shares which may be earned by LNSG as security for LNSG’s earn-in expenditures. The pledged shares will be delivered to LNSG on completion of LNSG’s staged earn-in obligations under the Option Agreement.

True North Gems and LNSG will finalize a full feasibility level construction and capital budget plan and timeline, and initiate discussions on the final construction schedules, site and building layouts, equipment procurement, and definitive capital cost allocations based on the definitive agreements between the parties. This finalized Construction Budget will be the road map for an expedited construction schedule to be implemented upon successful public hearings and the issuance of the exploitation permit.

The transactions discussed above are subject to the acceptance of the TSX Venture Exchange.

LNSG is predominantly owned by international arctic contractor Leonhard Nilsen & Sonner A/S of Norway. The Leonhard Nilsen Group of 15 companies is a major mining and construction company with over 70 years of experience in logistics and mining in arctic environments. They have worked on a variety of projects over the last 50 years and have focused on operations in Svalbard, Spitsbergen, Iceland, Greenland, Russia, Antarctica and throughout Scandinavia. LNSG is a major supplier of services to the oil, gas and mineral industry in Greenland.