Many people out there reading this will be surprised to the fact that you can ‘mine’ helium.

Helium is a noble gas, ‘He’ on the periodic table with an atomic number of 2. Helium is, as you can imagine, a gas at room temperature.

Helium is produced in the earth by the decay of radioactive elements such as uranium and thorium, this is a constant process with the earths crust, although not rare, it is not being formed quick enough to replenish current supplies, much like oil and gas.

This is not surprising, as helium is currently produced as a by-product of natural gas processing and LNG production, with global supply concentrated among six large multi-national companies. Now has come a time where companies are searching for standalone helium projects.

Helium has the lowest boiling point of all known elements, is non-flammable, and the second lightest. This combination of characteristics places helium as a unique commodity with numerous applications. 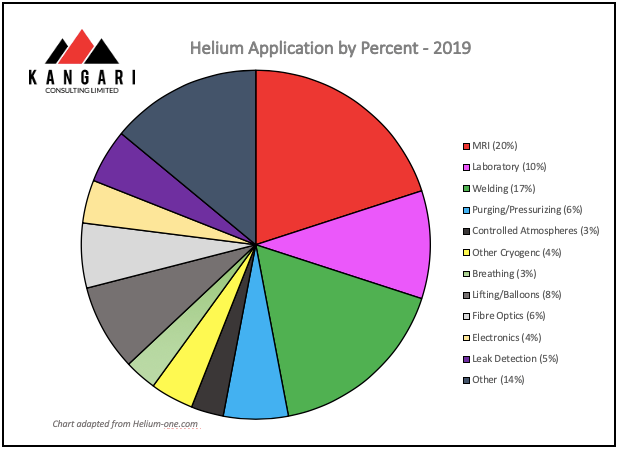 Surprising to some, but balloons only account for 8% of total helium use and over 20% is used in Magnetic Resonance Imaging (MRI’s) in hospitals. For those of you that are unfamiliar with the internal workings of an MRI machines; an MRI machine contains coils, a magnet and wires that conduct current. The machine uses a great deal of energy because of its large magnetic field. In order for it to use that much energy, it must be super conductive. For this to occur, wires inside the machine need to be reduced to a temperature of near zero degrees. The machine requires a substance in order for it to maintain a cold temperature, and that substance is liquid helium. The wires continuously are doused with liquid helium. The fluid has a temperature of -269.1oC, which is the equivalent of -452.11oF. The average MRI machine utilizes 1,700 liters of helium – there is currently 43 MRI machines for every 1 million people in Japan.

This continued growth in the use of MRI machines coupled with increased use of Helium in new technologies (hard drives, aviation etc.) has driven the demand of Helium to new highs.

The unit price of helium, which is measured in US$ per thousand cubic feet) has risen over 100% in the last decade. In 2016, the helium supply is currently divided between the USA (55% – Bureau of Land Management supply), Qatar (32%), Algeria, Australia, Canada, Poland and Russia. However, in 2018 the USA has ceased auctioning of its supply due to depletion of reserves – this cut in USA supply, along with the new tech increased demand has created a tight supply situation globally.

On-going geopolitical issues in the Middle East, particularly involving Qatar, are likely to have a continuing effect on the supply of helium, further deepening the supply deficient. 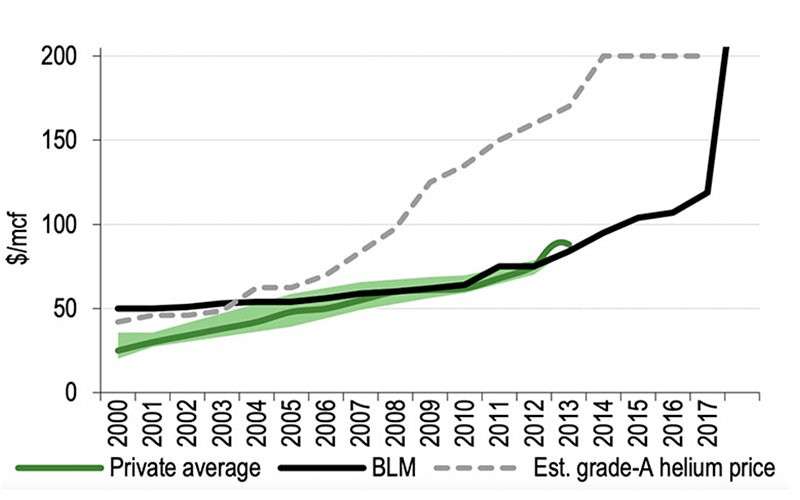 1 Price of Helium – From Stockhead.com.au

With a supply deficit and an increase in demand where is the world’s helium going to come from? Most projects remain early stage, prospecting so to speak. Blue Star Helium (ASX:BNL) has identified prospects in Utah, Colorado, Arizona and New Mexico, but fail to expand on the geology or merit of these areas – essentially, despite the work helium in their name, they remain an oil and gas explorer.

Another company on the radar is Helium One, a private, UK register, BVI based helium explorer with a focus on the Rukwa Basin in Tanzania. Helium One currently have estimated an Unrisked Prospective Recoverable Helium Volume (P50) of 98.9 billion standard cubic feet. This resource occurs in 28 leads, defined by 2D seismic and is supported by data from two legacy exploration wells and work is ongoing to convert this resource into a reserve.

In the United States, much more information is given by Desert Mountain Energy (TSX.V:DME) on their Heliopolis Helium Project in Arizona. The project is located in the Holbrook Basin in East Central Arizona which is considered to be the World’s best address for helium.

The Heliopolis project comprises of 65,911 acres (around 267km2) within the Holbrook Basin. The basin comprises of a salt pan which measures 258km x 160km with thickened Permian sedimentary rocks. The basin is home to Coconino sandstones and Fort Apache limestones, which are considered to be key reservoir rocks. The Coconino sandstones in particular are favorable with an average porosity of 14%, an average permeability of 110 millidarcies; and a water saturation of 29%. The salt pan overlying these Permian formations acts as the cap, to trap the helium gas.

The basin as long been explored for its oil and gas potential as well as other minerals. The area is also home to two of the world’s richest helium producing gas fields – Pinta Dome and Navajo Springs.

Looking forward, if DME were to hit, this area has historically produced 9.23 Billion Cubic Feet (Bcf) of helium with grades of gas produced of 8-10%, this compares to the industry benchmark of just 0.3-1% for commercial grade! This could be big! 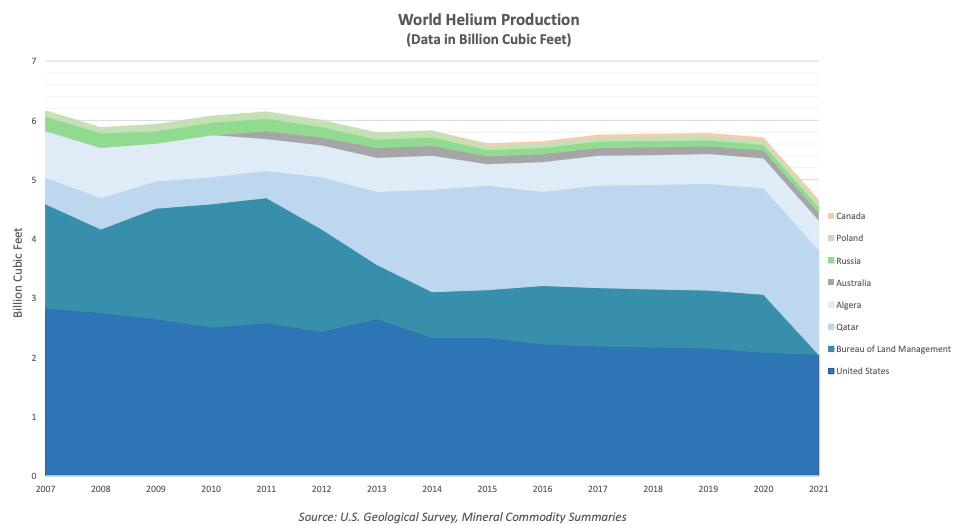