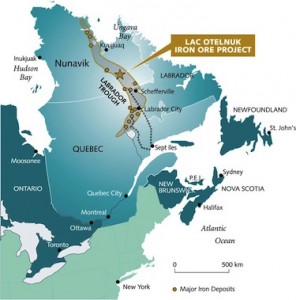 Sprott Resource Corp. (TSX:SCP) and Adriana Resources Inc. (TSX-V:ADI) announced today that they have entered into a definitive agreement to effect a business combination of SRC and ADI pursuant to a plan of arrangement under the Canada Business Corporations Act. In connection with the Arrangement, Sprott Inc. a fund managed by a subsidiary of Sprott, and Term Oil Inc. (a corporation controlled by Arthur Richards (Rick) Rule IV, Chairman of Sprott US Holdings Inc.) have agreed to invest, concurrently with the closing of the Arrangement, an aggregate of $15 million in the combined company by purchasing a combination of ADI common shares and Warrants (as defined below). Shareholders of ADI will be asked to approve a name change to Sprott Resource Holdings Inc. conditional upon successful completion of the Arrangement. The Arrangement, the Warrant Distribution (defined below) and the Private Placements are referred to collectively as the “Transaction“.

Under the Arrangement, SRC would become a wholly-owned subsidiary of ADI and holders of common shares of SRC would receive 3.0 ADI common shares per common share of SRC. ADI shareholders of record on the business day immediately prior to the closing date for the Arrangement would receive one-quarter of a warrant in respect of each ADI share held, with each whole warrant having a five-year term and a strike price of $0.333 per share. In the Arrangement Agreement, each of ADI and SRC have agreed to use its commercially reasonable efforts to obtain conditional approval of the Toronto Stock Exchange for the listing of the ADI common shares and Warrants on the TSX.

NAV of SRH following completion of the Transaction would be approximately $150 million ($0.29 NAV per ADI share), an increase of 42% from SRC’s most recently reported NAV of $106 million. SRH’s pro forma cash balance following closing is expected to be approximately $55 million with no debt.

$15 million investment by Sprott and certain related entities aligns SRH shareholders with the manager of SRH and other well-known resource investors.

• Equity Raise at a Premium

The Transaction will provide new capital and increased liquidity to support new and existing investments. Taking into account the Exchange Ratio, SRC and ADI expect that the Private Placements (which remain subject to the acceptance of the TSX Venture Exchange (“TSX-V“) will be priced at a premium of approximately 50% to the November 28, 2016 closing price of the SRC common shares and a 79% premium to the November 28, 2016 closing price of the ADI common shares.

• Strengthened Board and Management

Mr. Rule will also become Chief Investment Officer of SRH and Michael Harrison, President and CEO of ADI, will be Managing Director.

“Each of the proposed directors and senior management of SRH brings with them a wealth of experience in the natural resource sector, a deep network of industry contacts and a proven ability to identify and originate new investments,” said Steve Yuzpe, CEO of SRC. “By combining SRC and ADI we will create an integrated company with approximately $150 million in investable capital.”

“I’m delighted to be taking on the CIO role at SRH and believe the combined entity will have tremendous opportunities to create shareholder value in one of the most attractive markets that I have seen in my 40 years as a natural resource investor,” said Rick Rule.

“We believe this transaction is in the best interest of ADI shareholders,” said Donald K. Charter, Chairman of ADI. “Through this business combination, we will create a unique resource-focused company with a strong cash position to allow it to take advantage of new investment opportunities at an ideal time in the natural resource cycle.”

“We are very pleased to have the opportunity to invest alongside current SRC and ADI shareholders to increase Sprott’s ownership at what we believe is a very exciting time for the company,” said Peter Grosskopf, CEO of Sprott.

“On behalf of the SRC Board of Directors and management team, I would like to thank Mr. Grosskopf for his many contributions and valuable insight as a director of SRC,” said Terry Lyons, Chairman of the SRC board of directors. “As CEO of Sprott, Peter will continue to be a trusted advisor to SRH, and Sprott, through its proposed equity investment, will become one of SRH’s largest shareholders.”

SRC is a publicly-listed private equity firm focused on the natural resource sector. The company currently has investments in energy production and services, mining and agriculture. SRC creates value for its investors by applying a disciplined investment process to deploy capital while managing risk within highly cyclical sectors. SRC is a business builder that is committed to being a value-added partner with proven management teams. SRC supports its investments through active management and the provision of long-term capital, as well as strategic, financial and governance oversight. Founded in 2007, the Company is based in Toronto, Canada and is managed by an experienced team of private equity specialists, supported by the technical and investment resources of Sprott Inc. and its subsidiaries and affiliates. Management of SRC is dedicated to generating long-term superior returns on capital for its shareholders, while focusing on risk management and real wealth preservation.

Adriana Resources Inc. owns 40% of the Lac Otelnuk iron ore project in Northern Quebec. Adriana’s 60% joint venture partner in Lac Otelnuk Mining Ltd. is WISCO International Resources & Investment Limited, a subsidiary of Bao Wu Steel Ltd. In April 2015, the LOM JV published a NI43-101 compliant Technical Report on the feasibility of the Lac Otelnuk project. Adriana reported a cash position of $28.6 million as at September 30, 2016. The LOM JV is currently on care and maintenance, and the JV has a cash position of $7.9 million as of September 30, 2016. Adriana has a Board of Directors and management team with extensive experience in the resource sector and has been undertaking a strategic review of opportunities to create shareholder value while the LOM JV project is on care and maintenance.