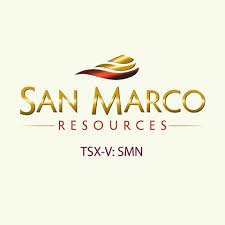 Highlights of the Phase 1 drill program include:

San Marco’s Executive Director, Bob Willis, states “We are very encouraged to see significant intervals of continuous gold mineralization at Buck, which confirms our preliminary findings that this is a large, near-surface gold/silver exploration opportunity. We intend to aggressively ramp up exploration efforts, with our ‘boots on the ground’ exploration team arriving on site in about three weeks. Our drill program gave us the first opportunity to see fresh core we could log and tie to gold mineralization, and to help target the best host rocks, alteration, and structural setting for gold deposition. We will use this new information to target drilling for Phase 2 and to prioritize numerous attractive, but previously poorly understood, target areas at Buck.”

The 1,806 metre drill program was centered in an area of historically explored mineralization and consisted of a total of five holes, where three holes were drilled in an area of known mineralization near surface. An additional two short holes were collared 350 metres to the northwest in an attempt to locate a previously postulated mineralized fault zone. Drill hole locations for the Phase 1 drill program can be seen in Figure 1 and were previously announced on April 8, 2020.

The primary objective of the Phase 1 campaign was to get fresh drill core to identify styles of mineralization and detailed analysis of subtle mineralizing controls that could then be applied project-wide. This has been successful, and these observations will be a key component in the design of the Phase 2 drill program.

Significant shallow drill intersections of gold and silver has shown the robust nature of mineralization, with most of the gold mineralization hosted as disseminations in the host rock, and as high-grade veins, commonly associated with sphalerite and pyrite (see Photo 1). Most of the mineralized system has been classified as felsic lapilli tuffs (volcanic rocks), with various degrees of brecciation. Rocks that are highly faulted and clay-altered have the most elevated gold values. Schematic cross sections can be seen in Figure 2 and Figure 3.

San Marco’s plans for the next phase of exploration include:

Significant intercepts for the Phase 1 drill program at Buck can be found below.

All sample assay results have been monitored through a quality assurance / quality control program. Industry best practices were used for defining a QA/QC program where 5% of the sampling stream was controlled by industry recognized certified reference material (CRM’s) and blanks. When necessary, additional QA/QC in the form of 5% of pulp and coarse reject duplicates were selected for laboratory verification. The drill core was logged in detail by geologists utilizing a logging approach designed by senior technical managers. Logging and sampling was completed at a secure facility in Smithers, B.C. by Coast Mountain Geological Ltd. (CMG). Drill core was sawn in half on site and half drill-core samples were securely transported to the ALS Global prep facility in Terrace, B.C. The samples were dried, crushed to 70% (< 2 mm), split to 250g, and pulverised to 85% (<75 µm). Sample pulps were sent to the ALS Global lab in North Vancouver, B.C., for analysis. Gold analysis was by 30g Fire Assay with AA finish and automatically re-analysed with Gravimetric finish if Au >5 g/t. Some samples underwent ore grade analysis using the Four Acid method. In addition, pulps underwent Multi-Element Analysis by ICP-AES. ALS Global is registered to ISO/IEC 17025:2017 accreditations for laboratory procedures.

The Company’s principal focus and asset is the recently optioned Buck Property in north-central British Columbia that has large tonnage gold-silver-zinc potential in a mining-friendly region that includes many former and current operating mines. In addition, the Company’s portfolio includes the several prospective, early stage exploration properties in Mexico.

San Marco is committed to environmental and social responsibility with a focus on responsible development to generate positive outcomes for all stakeholders.