Riverside to Receive US$5,400,000 in Additional Funding from BHP to Advance and Drill Copper Projects in Sonora, Mexico

Riverside to Receive US$5,400,000 in Additional Funding from BHP to Advance and Drill Copper Projects in Sonora, Mexico

Riverside Resources Inc. (TSX-V: RRI) (OTCQB: RVSDF) (FSE: 5YY) is pleased to announce that an additional US$5,400,000 in exploration funding is being granted to advance four previously generated copper projects as part of the expanding copper exploration program with BHP in Sonora, Mexico (see Figure 1 below). This new funding of at least US$5,400,000 is in addition to the US$1,300,000 allocated for the next generative phase of exploration work, which began two months ago on May 15th, 2021. Program funding highlights for the new project-focused funding are summarized below:

The permitting process for drilling at Chuin and Palofierro is already underway. The MT Survey’s at Sinoquipe and Peñitas are expected to commence after contractors are secured and the results from the deep geophysics work has the potential to lead to further drilling programs based on results.

Riverside’s President & CEO, John-Mark Staude : “We are pleased to work closely with BHP’s geoscientists and their exploration group as the porphyry copper targets we have identified continue to progress towards drilling. These projects and corresponding exploration campaigns expose our shareholders to incredible upside and catalysts that have the potential to create significant value for the Company. Riverside and BHP recently completed a weeklong technical field trip, which culminated with the approval by BHP of this additional US$5.4Million in exploration funding. In total, the additional budget allocation brings Riverside’s 2021 funding for copper exploration to over US$6.7M. We see excellent potential for continued growth in the well-endowed and under-explored southern extension of the Arizona-Sonora world class porphyry copper belt.”

These four projects include the previously highlighted: Chuin, Palofierro, Sinoquipe, and Peñitas properties (see press release dated June 21, 2021). The projects have now been approved for full funding to move toward drilling on the Chuin and Palofierro projects and deep geophysics on the Sinoquipe and Peñitas projects which would lead toward additional drill decisions in the near future and will be ongoing for a third consecutive year (see press release dated May 27, 2021). Sinoquipe and Peñitas will be progressed with geophysical studies similar to those done at Chuin and Palofierro where BHP and Riverside are preparing targets for upcoming drill programs. 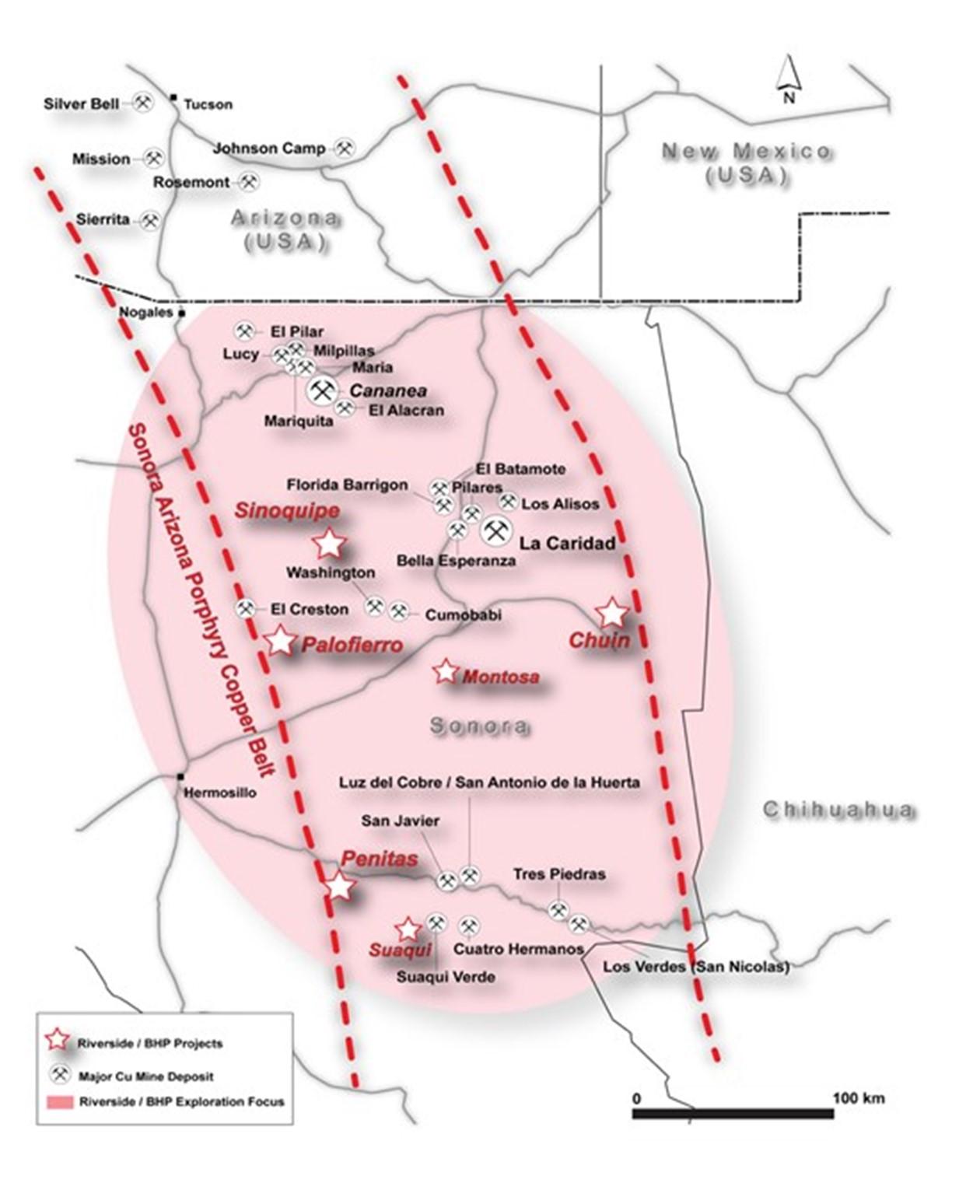 The scientific and technical data contained in this news release pertaining to the BHP Exploration Financing Agreement was reviewed and approved by Freeman Smith, P.Geo, a non-independent qualified person to Riverside Resources, who is responsible for ensuring that the geologic information provided in this news release is accurate and who acts as a “qualified person” under National Instrument 43-101 Standards of Disclosure for Mineral Projects.

Riverside is a well-funded exploration company driven by value generation and discovery. The Company has over $4M in cash, no debt and less than 72M shares outstanding with a strong portfolio of gold-silver and copper assets and royalties in North America. Riverside has extensive experience and knowledge operating in Mexico and Canada and leverages its large database to generate a portfolio of prospective mineral properties. In addition to Riverside’s own exploration spending, the Company also strives to diversify risk by securing joint-venture and spin-out partnerships to advance multiple assets simultaneously and create more chances for discovery.