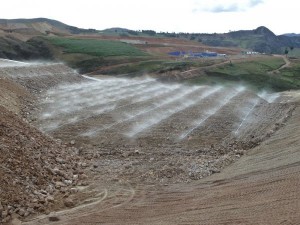 La Colorada is located 8.4kms from the Company’s La Arena Gold Mine and covers an area of 1,500 hectares. All of the mining claims and surface rights over the La Colorada project are owned by Rio Alto.

For 2013 a $7 million exploration program is in progress at La Colorada. The objective of this work is to define an initial resource estimate for the project and test three other targets in the vicinity – La Colorada East and Esperanza South and North.

The 2013 exploration program will consist of:

—  Resource definition drilling at La Colorada West including 3,000m of

—  8,000m of RC exploration drilling at Esperanza South and North

—  3,000m of diamond drilling (6 holes) to test a chargeability anomaly at

From 1996 to 1999 Cambior conducted geological mapping, sampling of rocks and soils and eventually drilled 3,367 meters in 20 holes of which 6 holes intercepted gold mineralization in the La Colorada West Zone.

over an area of 700 hectares

La Colorada West covers an area of 1.5km by 0.5km and appears to be open to the east and southeast. The lithology is made up of sandstones and breccias from the Chimu formation. The breccia zones are hydrothermal with iron oxide and silica filling the breccia matrix and the alteration is mainly dickite-zunyite and alunite. The lithology map shows the location of sandstones and shale intruded by hydrothermal breccias (in red) that may be a host to economic gold mineralization.

At La Colorada West sample lengths in trenches (rocks and soils) and in pits (soils) ranged from 0.7m to 2.0m resulting in 1,378 rock chip samples and 1,747 soil samples. Assays of the rock chip samples resulted in potentially economic gold values in 282 samples of which 231 samples yielded gold grades of 110 parts per billion (“ppb”) to less than 600ppb; 21 samples with grades ranging from 601ppb to less than 1,000ppb and 30 samples with gold grades of more than 1,000ppb to more than 6,300ppb with one 2m sample in trench 9 grading 23,630ppb gold. Assays of soil samples yielded potentially economic gold values in 339 samples of which 335 yielded grades of 110ppb to less than 600ppb; 3 samples ranging from 601ppb to 1,000ppb and one sample graded 1,657ppb gold. The La Colorada West Zone appears to be open (to the east and southeast) and a surface soil sampling program on a grid of 50m lines and 25m spacing is in progress at these possible extensions.