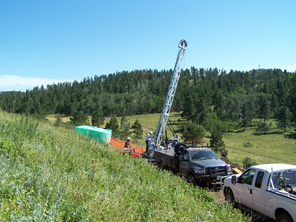 Randall J. Scott, President and Chief Executive Officer stated “We are extremely pleased with the meaningful increase in our estimated M&I resource at Bear Lodge. Our work in 2012 resulted in a much larger quantity of REE resource, confirmation of the peripheral zones of HREE-enrichment, and highlights the significance of this growing world-class source of CREOs. The increased M&I resource will be incorporated into the upcoming Feasibility Study, which is on schedule to commence in mid-2013.”

Critical rare earth oxides (CREOs) are those with the highest value, and for which the strongest future growth is projected. We refer here to the oxides of Nd, Pr, Eu, Tb, Dy, and Y as CREOs. The resource estimates for the Greater Bull Hill and Whitetail Ridge REE deposits show high grades for all of the CREOs. The Whitetail Ridge deposit is particularly enriched in the HREE component of the CREOs as well as the exploration targets located further to the west.

The updated resource is derived from an REE drill hole database that includes 216 core holes and 16,920 assay samples, completed by the Company between 2008 and the end of 2012. The estimate includes deposits in the Greater Bull Hill area and the HREE-enriched Whitetail Ridge deposit. The drilling indicates significant potential for further expansion of all resources, including additional HREE-enriched resources at the Whitetail Ridge deposit and nearby targets.