At Rødalen, in the southern part of the RKV Project, Playfair has discovered a coherent MMI Cu anomaly, as shown on the detailed map. The anomaly is open to the north and contains 7 values of MMI Cu greater than 50 times background in an area 300 metres long by up to 100 metres wide. There is no record of any previous exploration work in the immediate area.

“The Rødalen deposit was mined in the period between 1750 to 1810, with further exploration until 1918. About 40,000 tonnes of copper-rich ore was produced. The deposit is hosted by quartzite and thin horizons of amphibolite in generally calcareous biotite mica schist of the Gula group. The mineralization is totally covered by waste, but old reports describe the ore as 1-2 m wide ore zones rich in chalcopyrite and zones of massive pyrite and pyrrhotite.”

NGU further reports that samples taken from the dump by NGU geologists contained up to 1.81% copper and 0.96 gpt gold (see Rødalen Deposit Area for details).

“This new significant drill target, close to a former producing copper mine is the largest, in area, MMI response of the seven targets reported to date. Rødalen Mine also is the only occurrence with reported gold mineralization. Discovery of seven high priority drill targets in overburden-covered areas in a past-producing copper district further validates our approach to exploration on the RKV Project. Permitting work is ongoing and will be expanded, as warranted, to include new drill targets generated from the continuing exploration.” 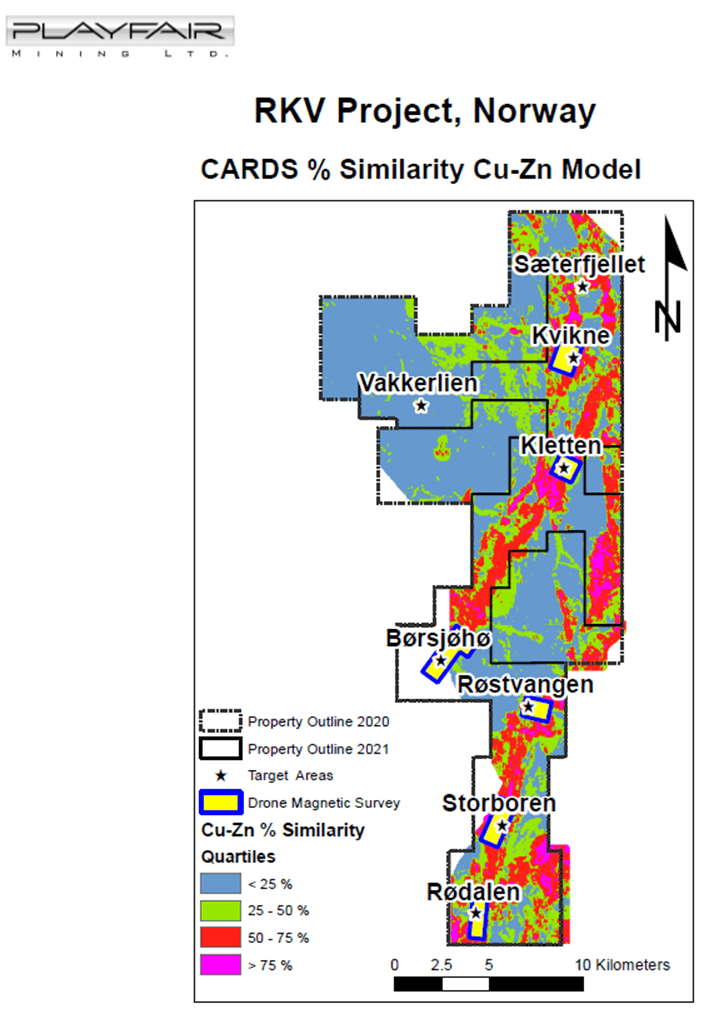 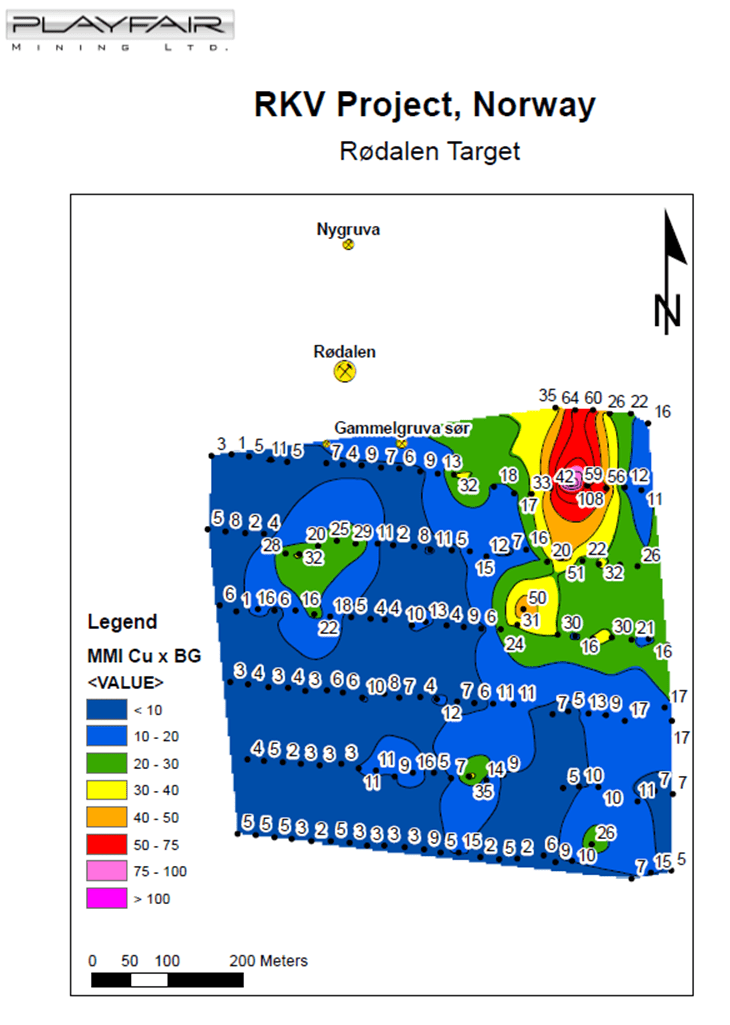 Playfair used an extensive digital database maintained by NGU as the basis for the initial evaluation of the area. To prioritize areas of the Property for further exploration, Playfair contracted Windfall Geotek (TSX-V: WIN) (OTCQB: WINKF) to carry out its proprietary CARDS (Computer Aided Resources Detection System) platform on the entire RKV Project. The targets generated by CARDS covered less than 1% of the RKV Project area.

Twenty-six of the CARDS targets were then evaluated by MMI (Mobile Metal Ion) soil geochemistry, a proven advanced geochemical exploration technique known to indicate blind mineralization. A total of 1,926 samples, including field duplicates, were taken in four phases of MMI fieldwork.

Seventeen of the twenty-six CARDS targets evaluated yielded MMI values greater than 50 times background in one or more of copper, cobalt, or nickel.

Work to date has allowed Playfair to reduce the exploration area to 201 square kilometers with a primary focus on the eight Target Areas shown on the RKV Project map. Seven drill targets have been defined to date.

Proposed drill hole layouts on several promising targets are being finalized in parallel with logistics planning and permitting. A property-wide target assessment of the multi-phase MMI surveys and drone magnetic maps will be provided in due course.