Where do I even start?

There is so much going on, it feels like Armageddon could be tomorrow, or at least the day after that…seriously.

Putin has upped the ante in Ukraine, holding what some call sham referenda in occupied areas of Eastern Ukraine to set the stage for their annexation. Russia has even said it has the “right” to use nuclear weapons to “defend” its territory and citizens.

Nord Stream 1 and 2 undersea pipelines in the Baltic Sea were attacked, causing large leaks and exposing further vulnerabilities of Europe’s energy sources. The director of the Swedish National Seismic Network at Uppsala University said these were clearly blasts, not natural causes.

Of course, the Russians are the obvious suspects. But this pipeline was not actively delivering natural gas. And half was paid for by Russia’s Gazprom, with the balance by a group of European energy firms. Nord Stream 1 and 2 combined can supply about 26 million households.

There are strong suggestions the U.S. may even be to blame. In early February, just before Russia marched into Ukraine, Biden said the US would stop Nord Stream 2 if the invasion took place. When asked how, since Germany controls it, he said, “I promise you. We will be able to do that.”

In any case, this pipeline rupture caused natural gas prices to pop 20%, and the cost to British consumers to spike 33%. Ouch.

And speaking of Britain, there’s plenty of other pain going around there as well.

The UK’s pound sterling has been falling against the USD, recently hitting its lowest level ever, touching $1.04. Before the 2008 Financial Crisis, the pound was $2, and before Brexit, it was between $1.45 and $1.70.

What happened? New Prime Minister, Liz Truss, announced unfunded tax cuts of $50 billion, tanking the pound. But there was a cascading effect.

That caused 30-year British gilts (bonds) to drop precipitously in value. But UK pensions own a lot of gilts, and their lower values risked triggering a crisis as sellers took charge. Pension funds were at risk of insolvency, since the huge sell-offs pushed gilt values down and could have caused them to force-sell gilts to meet creditor demands for cash.

So, the Bank of England suspended a programme to sell gits – meant to help get inflation under control – and promised to buy long-term bonds, up to 5 billion pounds worth daily for the next 13 weekdays, for up to 65 billion pounds, to avert crisis. After raising rates aggressively seven consecutive times, this looks like a pretty clear “pivot” to quantitative easing (QE).

Naturally, that risks fuelling inflation even further, in a country where official inflation levels are at 10%. As per the Financial Times, “At some point this morning, I was worried this was the beginning of the end,” said a senior London-based banker, adding that at one point on Wednesday (September 28th) morning there were no buyers of long-dated UK gilts. “It was not quite a Lehman moment. But it got close.”

There was even heightened concern of contagion risk from the UK to other international financial markets.

Meanwhile, inflation in Germany rose to 10% in September from 7.9% in August to reach a 70 year high! And with inflation at such lofty levels, Germany has just approved a Euro 200 billion energy relief package. German Chancellor Olaf Scholz even commented, “The German government will do everything so that prices sink.”

What? By spending an extra Euro 200 billion?
Even prior to this, European governments had committed over $276 billion to limit the impact of rising energy costs, after gas prices had reached 8x higher than their 10-year average. 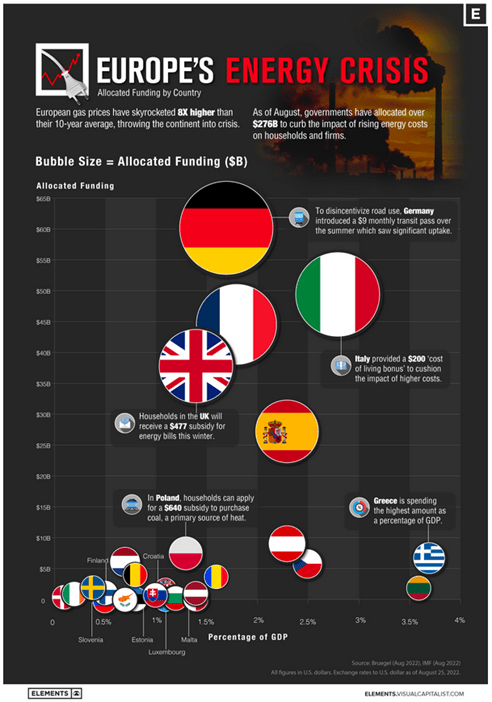 And spiralling energy costs are forcing manufacturing and numerous other sectors to shut down. Some businesses are paying the same for energy in one month as they paid all of last year. These shutdowns could even become permanent, causing soaring unemployment and damaging economic output.

Meanwhile, the USD has exploded 20% higher this year, reaching levels not seen since early 2022. Naturally that has weighed heavily on precious metals and resources of all kinds. And yet, silver is up by 5.3% in September, easily surpassing the US dollar, gold, the S&P 500 and long-term bonds. 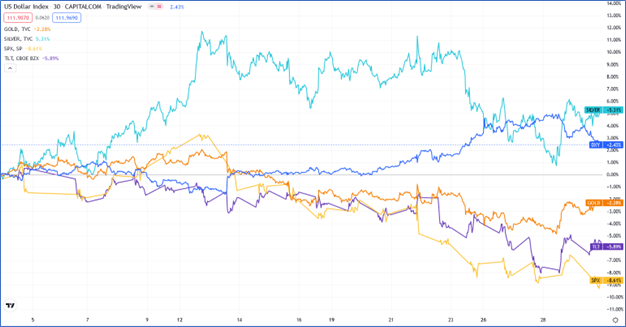 Through all of this, some of the most astute investors are not shying away from precious metals.

Rebecca Patterson, Chief Investment Strategist at the world’s largest hedge fund, Bridgewater Associates, said they are preparing for a prolonged stagflation: high inflation with slow or even negative growth, along with “sustained bear markets.”

As a result, she is buying gold, convinced it’s a bargain. She says Chinese and Indian appetites will mean growing Asian demand and lead to higher near-term prices. Patterson also believes TIPS (inflation correlated US bonds) and some undervalued international equities are attractive but will still underperform gold, based on a century’s worth of historical performance for the metal.

And managing partner Leigh Goehring, at Goehring & Rozencwajg, said silver is starting to flash a “buy” signal. Goehring, who once managed the world’s largest commodities fund, said he thinks it’s a mistake to sell commodities based on fears of a recession. He favors buying commodities at the end of a commodity cycle after a dearth of investment.

He even says “inflationary psychology”, a topic I discuss in Chapter 17: Money Velocity and Hoarding of my book The Great Silver Bull. As per Goehring,

“People are likely bringing forward future consumption to today because they realize prices will go up. It makes sense to buy a little more today instead of buying it down the road at a higher price. We’re beginning to see some of that at work,” he said. “This puts extra momentum in the economy. I wouldn’t be surprised that that’s happening, and we don’t even know how to measure it. That’s why everything remains so strong.”

Goehring thinks we’re facing a decade of shortage for pretty much everything, and sees a favorable setup in the silver futures market, with commercial traders near net long and speculators short, placing silver potentially close to a big buy signal.