PDAC by the Numbers

PDAC by the Numbers 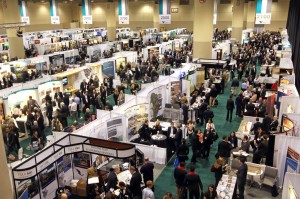 Exceeds 30,000 Attendees for Second Year in a Row

“We are so proud of the tremendous success of the PDAC 2013 Convention,” said PDAC Executive Director, Ross Gallinger. “The level of excitement and interest in the mineral exploration and development industry continues to be strong, and the PDAC Convention has once again provided an outstanding program that attracts government, industry, financial institutions and Aboriginal communities to attend.”

Now in its 81st year, the PDAC 2013 Convention is more diverse than ever before. A number of events including the CSR Event Series, Aboriginal Program and Investors Exchange garnered overwhelming support from the general public, reflecting the dynamic nature of our industry. More elected officials attended the convention than in previous years. The role natural resource development plays in the economic sustainability for Aboriginal communities across Canada is evident by the increased interest from the Aboriginal People present.

“We are thrilled at this year’s turnout,” said Gallinger. “Despite challenging global financial conditions affecting our industry, once again the PDAC Convention is the biggest in the world. As PDAC 2013 comes to a close, we are already looking forward to continuing our advocacy work on behalf of Canada’s mineral exploration and development industry, and to planning for PDAC 2014.”