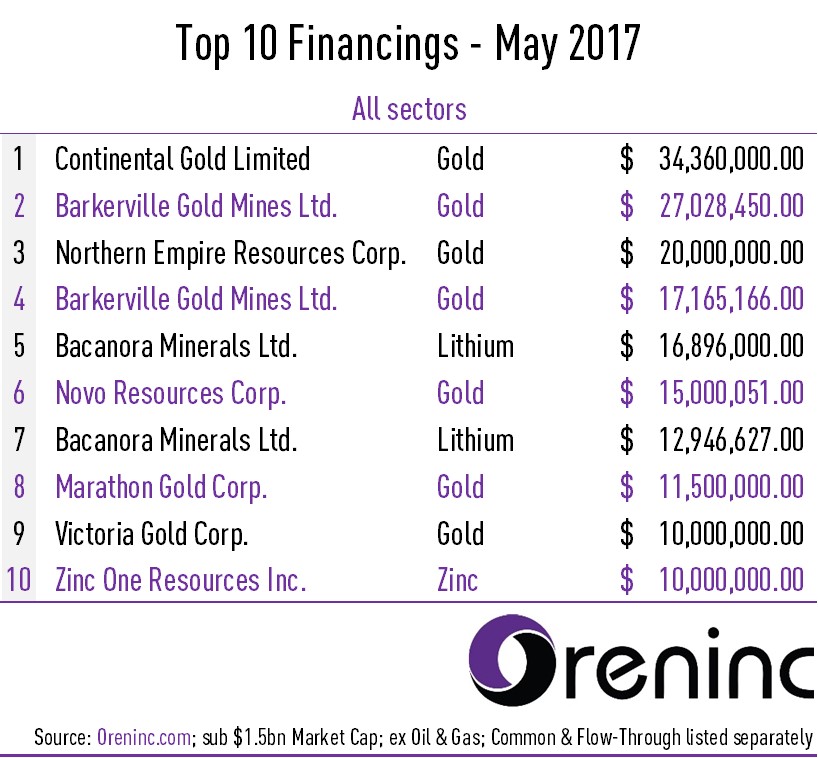 May saw 125 financings close in the Canadian financial markets for C$366.5 million including 64 financings for gold totalling $228.9 million, some 62.5% of the total.

Continental Gold (TSX: CNL) closed a US$109 million non-brokered private placement with Newmont Mining (NYSE: NEM) and a US$25 million private placement with RK Mine Finance Master Fund I at a price of C$4.00 per share to raise the equity component of the US$389 million funding required to build out a gold mine at its Buritica deposit in Antioquia, Colombia. Newmont and Red Kite now own about 19.9% and 4.6%, respectively, of the issued and outstanding common shares of Continental. Construction of Buritica is due to commence later this year with first gold pour scheduled for early 2020. As part of the financing, Newmont and Continental will form a strategic alliance to evaluate opportunities to partner on exploration of Continental’s other properties in Colombia.

Barkerville Gold Mines (TSXV: BGM) closed a bought deal private placement financing of $23.5 million led by Haywood Securities at C$0.95 per unit and a non-brokered private placement with Osisko Gold Royalties and Osisko Mining for C$15.8 million. The net proceeds will be used for exploration and development of the company’s properties in the historical Cariboo mining district of central British Columbia.

Northern Empire Resources (TSXV: NM) completed a private placement of C$19.56 million at a price of C$0.25 led by Cormark Securities on behalf of a syndicate of agents that included GMP Securities, Haywood Securities and PI Financial that saw Coeur Mining (NYSE: CDE) invest C$4.0 million. The funds were used to complete the acquisition of the Sterling gold project, the Hoodoo Canyon property and various royalty rights on mineral properties in Nevada and California, USA from Imperial Metals subsidiary Sterling Gold Mining.