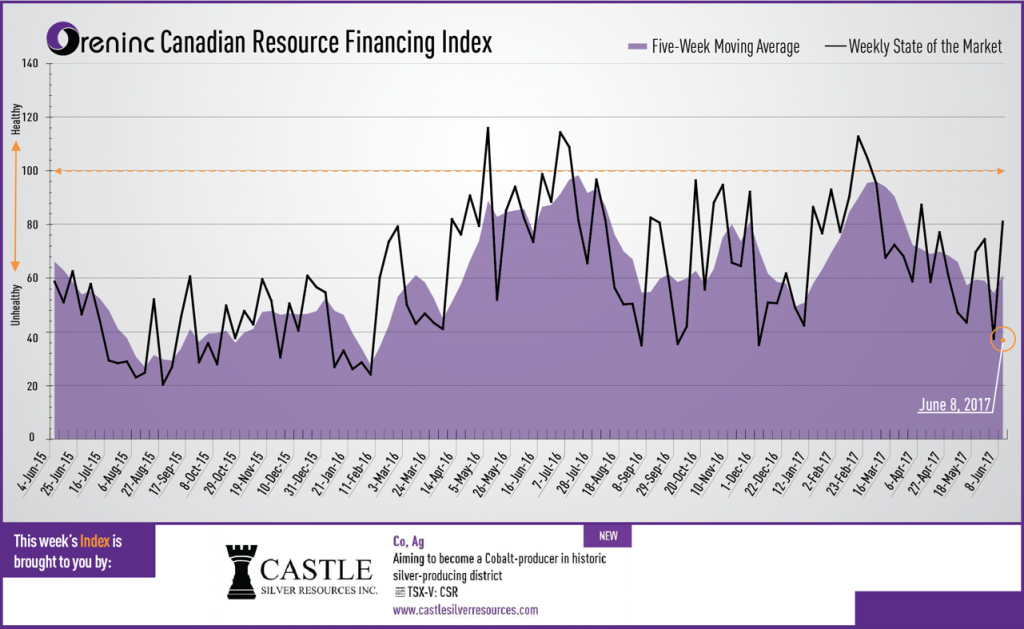 The Oreninc Index increased in the week ending June 9th, 2017 to 81.01 from 37.34 as gold had a roller coaster week, with politics once again dominating the news agenda.

In the US, all eyes were on former Federal Bureau of Investigation (FBI) director James Comey who testified before a senate committee about conversations he had with US president Donald Trump prior to being fired. Meanwhile, in the UK, a general election returned Teresa May as prime minister, reaffirming her mandate to lead the UK in its exit from the European Union, although the Conservative Party that she leads lost its overall majority.

Gold began the week strongly hitting US$1,297 per ounce Tuesday and then trailing off for the rest of the week to close at US$1,271 per ounce on Friday, marginally up on the previous week.

The marginal improvement in gold was reflected in the van Eck managed GDXJ that improved slightly to now be up 3.93% so far in 2017. The inventory of the SPDR GLD ETF saw a marked gain to fall close at 867 tonnes, from 851 tonnes the previous week.

In other commodities, silver followed gold’s trajectory but with a harder fall to close down on the week at US$17.22. Copper had a mirror opposite to the two precious metals, starting weak and ending with a bang to close at US$2.64. Oil continued to weaken with WTI crude falling to US$45.83 per barrel.

The Dow Jones Industrial Average experienced another record week to close up at 21,271 whilst Canada’s S&P/TSX Composite Index had an up-and-down week before closing slightly higher at 15,473. The S&P/TSX Venture Composite Index on the other hand, fell below 800 to close at 791.20.

With exploration at Alvito beginning by IOCG expert partner Oz Minerals, Avrupa is taking the first steps to identifying its real potential.

Castle Silver has various testing programs underway to evaluate the potential of two different potential business streams: the mineral potential of its Castle mine and recycling potential of its Re-2OX process. Positive results would underscore the company’s potential to be a player in the cobalt space.