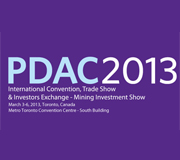 Words like “mammoth” and “monster” have been used to describe the size of the Prospectors & Developers Association of Canada’s (PDAC) Convention, the mineral industry’s most popular networking and educational event.

The Convention’s size is impressive. Held annually at the Metro Toronto Convention Centre, the Convention attracted over 30,000 delegates in 2012—a record number. No other annual convention for mineral exploration and mining draws a crowd of this size.

“Early indicators show both Canadian and international interest is strong again this year,” says PDAC President Glenn Nolan. “Trade Show and Investor Exchange exhibits sold out early on and we’re seeing many of our 2012 sponsors returning this year. 2013 is shaping up to be another exciting year for the Convention.”

Now in its 81st year, the Convention attracts investors, analysts, mining executives, geologists, prospectors and international government delegations from all over the globe.

In 2012, 25% of Convention delegates were international—reflecting the evolution of the Convention from a national event into an international one. Outside of Canada, the largest number of attendees in 2012 came from the U.S., Australia, England, China and Peru.

The PDAC’s Executive Director Ross Gallinger, who came on board in August 2011, experienced the Convention from the inside for the first time in 2012. Having been part of the mineral exploration industry for years and a regular Convention delegate, Gallinger says the Convention has become “a massive focal point for the junior exploration sector.”

“The Convention fosters information-sharing and relationship-building that impacts the industry throughout the rest of the year,” he says. “The networking that goes on during those four days results in countless new relationships and ideas, reinforces current partnerships and sets the stage for a great many deals.”

“We look forward to another tremendous event in 2013, with expanded programming, an impressive list of speakers for our technical sessions, and innovative touches like our mobile convention guide,” says Gallinger. “It’s not just about increasing our numbers though—our goal is to maintain the quality of the Technical Program and the overall Convention experience.”

The PDAC Convention is actually a Convention, Trade Show and Investors Exchange in one.

The Technical Program features talks by industry experts that reflect the PDAC’s year-round advocacy work as the industry association representing the mineral exploration and development sector in Canada. The program opens with the “Commodities and Market Outlook” session, and includes other sessions such as “Land Access Challenges and Solutions,” the keynote session on “Risk and Reward in Mining Exploration and Development,” “Building Aboriginal Capacity for Economic Independence,” “Financing in a Volatile Market,” “Geophysics,” and “Ontario’s Ring of Fire: Unlocking Potential and Creating Opportunity.”

The PDAC Convention is offering a record number of Short Courses in 2013 to assist delegates with their professional development goals and to provide more opportunities for Convention attendees to learn about the industry. Courses will be offered on everything from health and safety to communications to geophysics.

The CSR Event Series, which is open to the public and free to attend, is in its fourth year in 2013. The CSR sessions provide a forum for learning and discussion, and cover a range of issues related to corporate social responsibility in the mineral exploration and mining industry. Last year’s six sessions had standing room only, and interest in the series is expected to be high again this year. Organizers say the CSR Event Series is seeing increased interest because exploration and mining companies have recognized that CSR plays a central role in all their business operations. Companies are keen to learn from people who are engaged in CSR on a daily basis and who speak from direct experience.

The Convention’s Aboriginal Program, which includes a technical session, an Aboriginal Forum, and the Skookum Jim Award, has been expanding and growing in importance since its inception in 2006. The expansion of the Aboriginal Program is a reflection of the natural partnership between Aboriginal people and the mineral industry, say organizers, something the PDAC fosters in its programs and advocacy work all year round.

The Aboriginal Program offers a one-of-a-kind opportunity for Aboriginal communities and companies, as well as representatives from the mineral industry, to come together and network, foster relationships and share knowledge. It enhances industry awareness of Aboriginal affairs, and showcases success stories of partnerships and economic development. The steady increase in the direct involvement of Aboriginal people in the mineral exploration and development industry in Canada means the program will continue to gain importance.

As part of the PDAC’s work to address the mining industry’s looming human resources crunch, the PDAC has developed a comprehensive Student Program at the Convention. The program offers students a unique opportunity to network with industry professionals from all over the world. In 2012, the Convention attracted over 1,600 students from across Canada, the U.S. and internationally.

In 2013, the popular Student-Industry Networking Luncheon is back and has increased in size. At the luncheon, students are given the opportunity to mingle with industry professionals and colleagues. The Student-Industry Forum returns this year with a keynote address and a panel of industry experts. Students will be able to learn about the exciting range of career opportunities in the industry and take part in a Q&A session.

The Trade Show features 415 companies, organizations and governments promoting technology, products, services, and mining jurisdictions worldwide. The opportunity for Convention delegates to learn about the global mineral sector while walking the aisles of the Trade Show floor is phenomenal. The Trade Show receptions on Monday and Tuesday afternoon give attendees the chance to network over a glass of wine or beer on the show floor.

The Investors Exchange, which is open to the public and is free to attend, is the leading investment show dedicated solely to the mineral industry. The Investors Exchange gives an insider’s look at opportunities for business development, joint ventures, property acquisitions and financing within the mineral sector, and attracts banking executives, brokers and analysts, fund managers, government representatives, retail and institutional investors, senior mining executives, and students. It includes over 580 exhibitors, the Prospectors Tent featuring maps, samples and claim results of independent prospectors, and the Core Shack featuring the latest mineral discoveries from around the world.

There is no shortage of social events at the Convention, including the Awards Evening, Mining Night and the Gala. Other ticketed events include a series of three luncheons running Monday to Wednesday which feature popular speakers such as the Honourable Perrin Beatty, President and CEO of the Canadian Chamber of Commerce, who will be speaking at the Innovation Luncheon.

The PDAC Convention is truly a well-rounded event—it even includes a hockey tournament. The PDAC-CARACLE Cup Hockey Tournament raises funds for Mining Matters, a PDAC-established charitable organization dedicated to educating students, teachers and the public about geosciences and the importance of mineral resources.