To date twenty holes totaling 2,956 metres have been drilled at  Megapozo and 4 holes totaling 1,238 metres at Roberto Tovar. Including the previously drilled La Ivana target, drilling to date totals 6,483 metres in 48 holes. Assays are pending for an additional ten holes, and two holes are in progress. Two drill rigs are active and an additional 5,500 metres in the Phase 1 program will be drilled by the end of the year. After completing drilling in Megapozo and Roberto Tovar, the El Dorado and San Antonio target areas will be tested. A Phase 2 program is anticipated to follow commensurate with the advancement of new targets, including targets on the adjacent 24,000-hectare acquisition announced in July 2020.

Table 1: Significant drill intercepts on the Megapozo target. For equivalent calculations $1,900 per ounce gold, $26 per ounce silver, $0.87 per pound lead and $1.08 per pound zinc were used. Intervals shown are drill intercept, true thickness are not yet calculated. Megapozo drill holes 22 through 30 were previously reported and drill-holes 33-37 did not contain significant intercepts.

“Outcrop continues to build on success by discovering large, continuous, high-grade shoots in every target tested,” commented Joe Hebert, Chief Executive Officer. “El Dorado and San Antonio, the next two targets are both supported by attractive surface sampling. The El Dorado vein in particular shows up to 179 g Au/t and 2,200 g Ag/t in trenches.”

The Megapozo target hosts the Paraíso primary and secondary veins. The current phase of drilling has intercepted the vein for 300 metres along strike and up to 310 metres down-dip and remains open in three directions and at depth. The thickness of the vein is variable with a range of 0.10 to 2.26 metres and an average drill-intercept width of 0.74 metres. Veins are commonly banded with quartz druse and local hydrothermal breccia. Sulfides vary from 1% to 15% occurring in character as disseminated in veinlets, and as massive. The quartz veins typically have alteration selvages of clay, silica, and sulfide. A preliminary estimate of the Megapozo (Paraíso veins) high-grade shoot has an average grade of 11 g Au/t and 780 g Ag/t or 21 g equivalent Au/t or 1,660 g equivalent Ag/t. The Megapozo discovery exceeds Outcrops first La Ivana discovery in both dimensions, thickness, and grade.

The Roberto Tovar discovery includes eight holes with high-grade silver mineralization drilled by a previous operator in 2012 and the first four exploration holes drilled by Outcrop offsetting the previous drilling. The Roberto Tovar shoot extends at least 200 metres along strike and up to 190 metres down-dip containing multiple close-spaced high-grade veins. Two Outcrop holes show shears sixty-five metres in elevation above the previously drilled shoot to the south as well as historic workings with an intercept width of 2.25 metres. The third and fourth Outcrop holes intercepted similar veins to that seen in the 2012 holes. Mineralization is expressed as pyrite-galena and sphalerite in the veins. Assays are pending for these holes.

Roberto Tovar shows two or three primary veins and several secondary veins that are subvertical striking north-northeast and steeply dipping to the west. Drill intercept widths for these veins range from 0.5 to 8.14 metres averaging 3.16 metres. In general gold tenor appears lower in Roberto Tovar but silver values are similar to the Megapozo and La Ivana shoots. The weighted average of significant intercepts from the previous drilling show a weighted average of 687 equivalent g Ag/t over an average intercept of 1.98 metres.

Roberto Tovar is open to the north and south and down-dip and future drilling will define the limits of the shoot.

Previously released desktop calculations of composited grades of close spaced parallel veins and internal wall rock show that some veins can be composited with intervening wall rock to provide intercept widths up to 18 metres at 450 equivalent g Ag/t diluted grades. 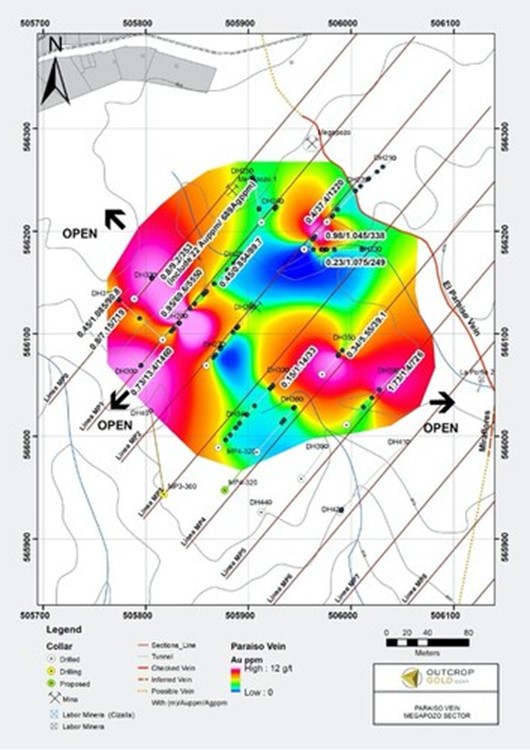