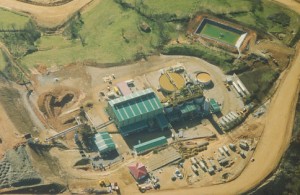 Orvana Minerals Corp. (TSX:ORV) through its wholly-owned subsidiary, Empresa Minera Paititi advises that, due to certain factors and market conditions, it has suspended the operations of its Leach-Precipitation-Flotation plant at its UMZ Mine in Bolivia.

The Company has been processing its oxides ores at the UMZ Mine using acid produced at site for the LPF plant. The Company has been running the LPF process for a period of 15 days per quarter. The Company has suspended the operations of the LPF plant for a number of reasons including (i) costs of LPF consumables and labour have increased substantially since the start-up of the LPF plant, (ii) recoveries and maintenance of LPF oxide feed have been inconsistent and more recently have been well below forecast, (iii) consumption of acid in processing of oxide ores has also increased recently due to the lithology of oxide ores processed, (iv) the LPF campaigns are significantly higher in costs than the flotation-only campaigns on a unit cost per tonne basis, and (v) current and projected long-term metal prices are lower than previously forecasted.

The Company will continue to process transition ores, which include both copper in oxide minerals and copper in sulphide minerals, by a flotation-only process. The acid plant and other process areas of the LPF plant will be placed on care and maintenance.

As a result of the suspension of operations at the LPF plant for the foreseeable future, management performed a preliminary impairment analysis and expects to record a pre-tax impairment charge of approximately USD$6.5 million in the third quarter of fiscal 2013 for the UMZ Mine. This impairment charge does not include the oxide ores in stockpiles carried at $1.4 million or the oxides in situ. The Company will complete a final impairment assessment by the release of its third quarter 2013 results.

Focus for the UMZ Mine is now on optimizing the flotation process, with additional metallurgical and engineering testing on alternate methods of oxide treatment underway. The Company has been conducting recent additional tests to determine whether oxides can be processed by flotation-only using different reagents. Positive preliminary results from bench tests have been received and next full plant campaign tests are being considered in the upcoming months. The Company intends to continue to stockpile oxides that are stripped for access to the sulphide ores.

Orvana Minerals is a multi-mine gold and copper producer. Orvana’s primary asset is the El Valle/Boinas-Carles gold-copper Mine in northern Spain. Orvana also owns and operates the Don Mario Mine in Bolivia, processing its copper-gold-silver Upper Mineralized Zone deposit. Orvana is also advancing its Copperwood copper project in Michigan, USA.