ORENINC INDEX up on deal-flow improves 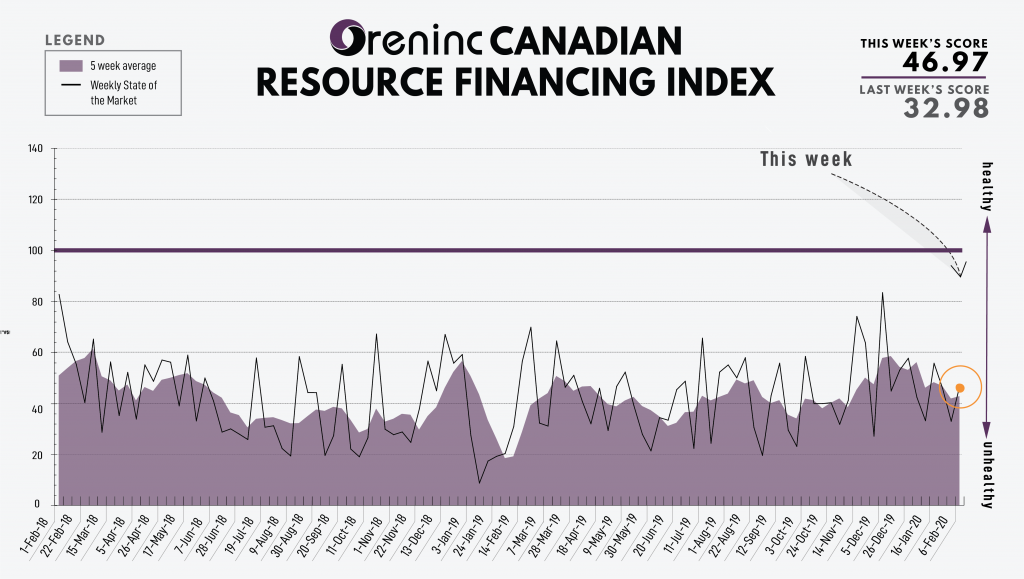 The Oreninc Index rose in the week ending February 7th, 2020 to 46.97 from an updated 32.98 a week ago as more deals were launched, albeit for a lower average amount.

The coronavirus outbreak dominated the news this past week as the number of cases increased and various countries around the world reported cases. In China, where the outbreak started, more than 630 people have died and over 31,000 cases have been confirmed.

With the movement of people in many parts of China restricted and international travel to and from the country having been largely grounded, economic shockwaves are spreading around the world. China’s GDP growth is now expected to come in well under the 6% forecast at the start of the year. With factories shutting as workers stay at home, international supply chains are beginning to feel the strain around the world, while the flow of raw materials to China have slowed with China requesting Chile delay sending shipments of copper, for example.

Oil has been another casualty of the virus outbreak with the price of a barrel of WTI falling to close to fifty bucks, prompting emergency meetings at OPEC headquarters in Vienna to mull production cuts to avert a supply glut further dampening prices.

Positive news is starting to emerge both in terms of containment of the virus, improvement in the rates of those infected who recover and that a vaccine could come sooner than expected.

In the US, President Donald Trump was acquitted of the impeachment charges levelled against him and emerged triumphant and arguably in a stronger position than ever. His State of the Union address was widely viewed as a victory lap as he reeled off a long list of positive economic indicators and other statistics to the chagrin of Democrats. Trump said the booming stock market added more than $12 trillion to the nation’s wealth during his mandate.

Trump also said he has created 7 million jobs over three years. And the jobs news continues to be positive as the ADP Employment Report showed the private sector added 291,000 jobs in January, considerably more than the forecasts of 156,000.

With China’s economy reeling from the impact of the coronavirus, it held out an olive branch to the US by announcing it will halve duties on $75 billion of imports from the US on Valentine’s Day (February 14th) as part of the phase-one trade agreement it agreed with Trump a couple of weeks ago. Washington is set to implement tariff reductions at the same time.