ORENINC INDEX up as gold rebounds, but numbers sad 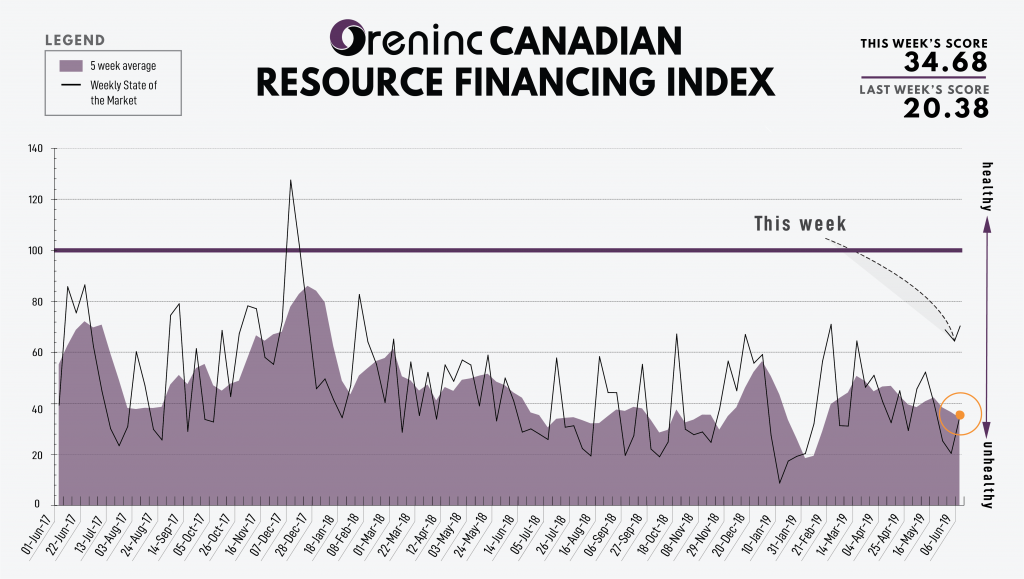 Aura Resources (TSX-V:AUU) entered into an option agreement with Thorsen-Fordyce Merchant Capital and TF Minerals to earn a 100% interest in the Jefferson Canyon gold-silver project in southern Nevada, USA.

The Oreninc Index increased in the week ending June 7th, 2019 to 34.68 from 20.38 a week ago as gold rebounded sharply and there was some bought deal action. However—and a rather poignant however at that—the numbers continue to be terrible with total dollars announced under C$20 million and the average offer size down to C$500k.

This past week marked the 75th anniversary of the D-Day landings of Allied forces in Normandy, France which eventually helped defeat Nazi Germany. Without this effort and sacrifice, along with an equally determined effort by Russia in the east, the world would have been a markedly different one from that which we enjoy today.

A strong week for gold as poor US jobs figures suggested that a recession may be around the corner and an easing of interest rates and perhaps more quantitative easing. US non-farms payroll data showed just 75,000 jobs were created in May, well below the 177,000 expected pushing gold to a three-month high. The next US Federal Open Market Committee meeting is June 18-19th.

The US decided not to impose a 5% tariff on imports Mexico after its southern neighbour agreed to do more to stem the tide of illegal immigrants crossing into the US from Mexico. Meanwhile, trade tensions continue unabated between the US and China and these fears continue to beat down base metals with Chile’s state copper company warning that pricing is too low for many operations to be sustainable and certainly too low for new capacity investments to be made.

In the UK, prime minister Theresa May stepped down as leader of the ruling Conservative party although she will remain at the head of the government until a new leader to chosen in the coming days. May was essentially ousted for failing to broker a deal for the UK to leave the European Union that could be supported by the many fragmented and polarised political factions.

Aura Resources (TSX-V:AUU) entered into an option agreement with Thorsen-Fordyce Merchant Capital and TF Minerals to earn a 100% interest in the Jefferson Canyon gold-silver project in southern Nevada, USA.

With a similar geological setting to Round Mountain, Jefferson Canyon represents potential of a significant precious metals discovery as evidence by rock samples grading from 2.98 to 26.1g/t Au and 160.4 to 2,975g/t Ag. With surface sampling to be expanded over a north-trending zone measuring about 500m wide and up to 2km long, the company could generate some very impactful news throughout the remainder of the year.