The Oreninc Index fell further for the week ending March 16, 2015. Total dollars fell to to $57.4m, a three-week low. One brokered and bought deal was announced for $14.2m, a two-week low and three-week high respectively.

Deal-making was almost non-existent for the week, with the only major news of note being reports that Glencore Xstrata (LON:GLEN) and OAO Russneft are in negotiations to convert Glencore’s assets in Russneft subsidiaries into a 49% stake in the Russian oil firm’s holding company. No cash will change hands in the deal. Commodity prices took a beating for the week, with iron ore hitting a seven-year low. Gold also fell dramatically to a YTD-low, at least partially on news of a better than expected US jobs report.

While the Index’s low level, mixed with the especially bad commodity prices and lack of deal-making, looks and is troubling, the fact that there were three deals above $14m for the week, is a positive. Still, the sluggishness is disappointing for an industry that can’t seem to catch a break. 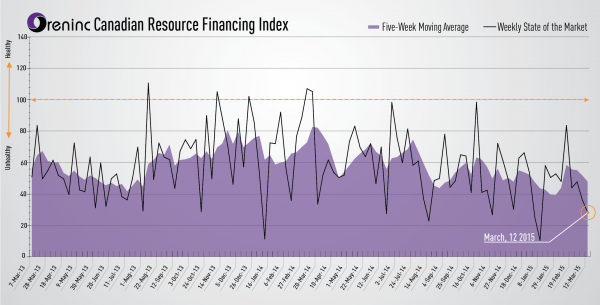