ORENINC INDEX down as substantial financings fell away

ORENINC INDEX down as substantial financings fell away 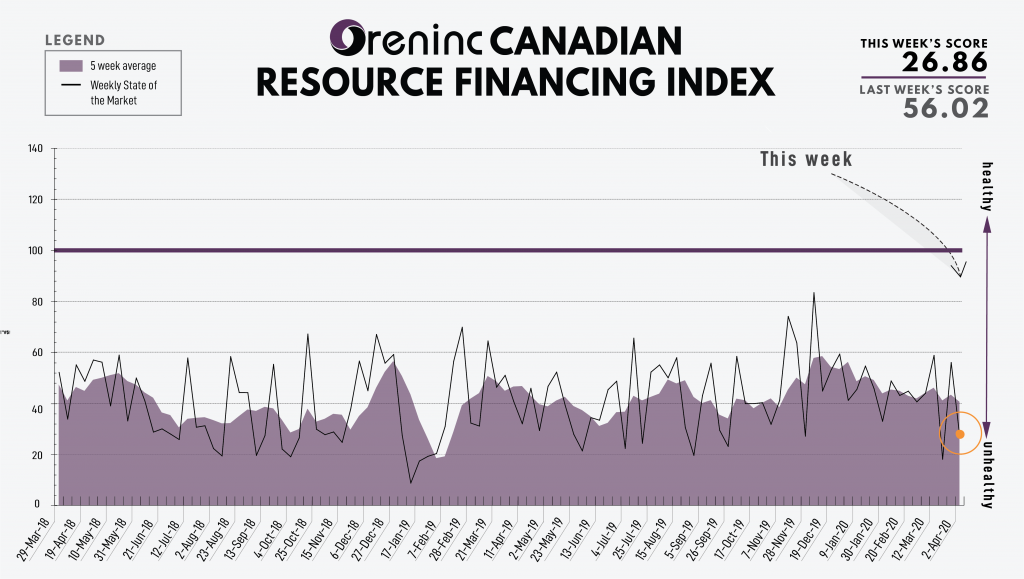 The Oreninc Index fell in the week ending March April 3rd, 2020 to 26.86 from an updated 56.02 as substantial financings fell away.

In many ways, the past seven days was a calmer week for the markets although the death toll, number of infections, and economic woes from the COVID-19 virus outbreak mounted up. France and the UK saw significant increases in their daily death tolls while Italy finally saw some stabilization.

Almost one and a quarter million people have now been infected by the virus, with over 60,000 deaths so far and almost a quarter of a million people have recovered. Europe and the USA are the joint epicentres of the virus outbreak with US President Donald Trump warning that the next two weeks are going to be “very, very painful”. White House projections put the potential death toll at 100,000 to 240,000 lives.

With the federal government reluctant to impose a nationwide quarantine and step on states’ rights the majority of the states of the republic have done so, although domestic flights are still numerous. President Trump extended federal coronavirus guidelines such as social distancing until at least 30th April.

With various industrial sectors in the US asking for billion-dollar bailouts, the impacts of the slowdown in activity are rippling through the world’s largest economy. The US Bureau of Labour Statistics reported the US economy lost 701,000 jobs in March, much worse than forecasters expected, with the unemployment increasing to 4.4% from 3.5% in February. Earlier, the government reported a 6.6 million increase in jobless claims, double the 3 million forecast.

The end of the first quarter saw the Dow record its biggest quarterly decline since 1987.

Energy markets had a dramatic week, with the benchmark WTI falling to around US$20 a barrel before later jumping 40% after President Trump tweeted Russia and Saudi Arabia would reduce output, and then on news that China was thinking of stocking a strategic reserve.

The Chicago Board Options Exchange Volatility Index (VIX or fear index) continued to fall, closing down at 46.80 from 65.54 a week ago.