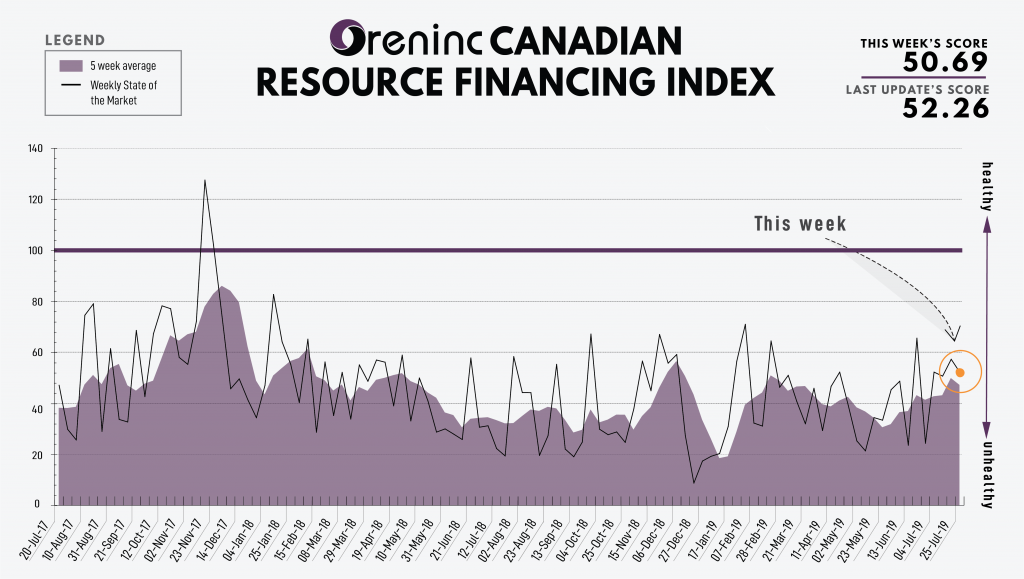 The Oreninc Index more fell in the week ending August 16th, 2019 to 50.37 from 57.30 as the number of deals fell. This followed an updated index score of 50.69 the week ending 2 August when Oreninc was offline for technical reasons during which time gold broke through US$1,500/oz!

Mixed signals out of the US White House about China have seen volatility become the norm in many markets in recent times, producing wild swings in the Dow Jones and many commodities. Markets reacted positively to US authorities saying the implementation of additional 10% tariffs on Chinese imports would be postponed until December following earlier statements by US president Donald Trump that he would impose an additional 10% tariff on $300 billion worth of Chinese imports from September 1st. If implemented, this tariff would mean all Chinese exports would be subject to tariffs of at least 10%. Chinese authorities said the additional 10% tariff violates a consensus reached between the leaders of both countries in Osaka, Japan and that it would retaliate in kind.

In Hong Kong, democracy protests against increasing control by China continue and have resulted in violent confrontations with riot police and the closure of its international airport for a couple of days.

The move higher in gold follows the US Federal Reserve making a much expected 25 basis point cut to interest rates a couple of weeks ago although it initially lost almost $30/oz as a result of dovish remarks by chairman Jerome Powell which suggested the US economy is not as weak as some might think. Powell’s comments drew the ire of president Trump who wanted a cut of at least 50 basis points, and the following day gold added $40/oz. The positive feeling around gold also saw it shrug-off the latest US Labor Department jobs report which showed the addition of 165,000 positions in July and the unemployment rate falling again to 3.6%.

Gold has consolidated about US$1,500/oz as the ten-year US treasury dived below 2% to its lowest since September 2016, while the thirty-year treasury yield fell under 2% for the first time ever. The spread between the US two-year and ten-year treasuries temporarily fell to a negative 1 basis point. This yield curve inversion—where the long-term interest rates fall below the short-term rate —has often been the harbinger of economic downturn and recession. Gold has been in bull mode for the past couple of weeks hitting a six-year high in the US dollar as well as all-time highs in Sterling and over 20 other currencies including the Canadian Dollar, the Australian Dollar and India’s Rupee.

Adding grist to the mill, the World Gold Council recently published its second quarter gold trends report which showed central banks bought 224.4 tonnes of gold in the quarter taking purchases for the first semester to 374.1t, the largest net first half increase in its 19-year quarterly data series. Holdings of gold-backed ETFs also grew to a six-year high of 2,548t.

New UK prime minister Boris Johnson is finding that his bluster and optimism, effective from the sidelines, will not cut the mustard in the top decision-makers position. Johnson refuses to talk with the European Union (EU) until it drops what is known as the backstop position to keep the frontier between the Republic of Ireland and Northern Ireland border free. The EU basically said find, this is non-negotiable. US politicians are now expressing their views given the US was the guarantor of the Good Friday peace agreement 20 years ago, one provision of which was an open border.

Johnson is facing hostility on all sides and also saw his majority cut to a single seat after the anti-Brexit Liberal Democrats won a by-election in Wales. Unsurprisingly, the UK pound has fallen to a two-year low against the US dollar. With the UK seemingly heading towards a no deal exit from the EU, a cross-party alliance of MP’s who are opposed to this outcome may seek to raise a motion of no confidence in the prime minister.

The high grades of gold sampled at surface are encouraging and bode well as the company continues with its due diligence process under its six-month right of first refusal, before committing to an acquisition.