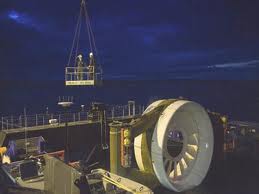 Tidal technology company, OpenHydro, announced today in Dartmouth that it has been selected by the Nova Scotia Department of Energy in Canada for a tidal energy demonstration project at the Fundy Ocean Research Centre for Energy (FORCE) test site. OpenHydro was selected as part of a competitive process undertaken by the Department in its drive to progress the development of a tidal energy industry in the Bay of Fundy.

OpenHydro, a DCNS company, will now proceed with plans for the deployment of a fully grid connected 4MW tidal array to be in place later in 2015. The array will consist of two 16m (2.0MW) commercial scale turbines. On successful completion, this project has the potential to be the world’s first multi-megawatt array of interconnected tidal turbines, providing energy to over 1,000 customers in Nova Scotia.

OpenHydro’s 16m tidal turbine has already been successfully deployed and is currently operating off the coast of France.

A group led by OpenHydro together with Nova Scotia-based energy company Emera, will deliver the project. The projects key local industrial partners are Irving Shipbuilding, Irving Equipment and Atlantic Towing. The group has ambitious future plans for tidal energy in the region and are looking to use this initial demonstration project as the first phase of a commercial scale project in the Bay of Fundy, which subject to regulatory approvals, will see the array grow to 300MW.

OpenHydro is committed to establishing a local manufacturing hub in the Bay of Fundy area using local skills and predict that 950 direct and indirect jobs will be created as the project moves to commercial scale. It is OpenHydro’s strategy to develop local manufacturing hubs in regions located close to major areas of tidal resource.

Commenting on this latest award by the Department of Energy in Nova Scotia, Thierry Kalanquin, executive chairman of OpenHydro and DCNS Senior Vice President Energies and Marine Infrastructure, said: “OpenHydro is proud to have been the first technology installed in the Bay of Fundy and we remain convinced of the potential of the region as a major source of clean renewable energy. This project represents an important step in building a local tidal energy industry in Nova Scotia and a next step in the development of commercial tidal farms in the region. Thanks to the on-going support of the Department of Energy of Nova Scotia, we are looking forward to continuing to work with FORCE and building a long term relationship with our industrial partner Irving.”

“We believe in the power of the Bay of Fundy,” said Chris Huskilson, President and CEO of Emera. “Along with OpenHydro, we are very proud to have been the first to deploy a tidal turbine in these waters. Now, together with Irving, we’re excited to continue development of the tidal industry in Nova Scotia and increase the importance of tidal in our region’s energy mix.”

Following today’s announcement, OpenHydro and its industrial partners will now progress work schedules and engage with the procurement cycle before mobilisation and deployment in 2015.

OpenHydro is a DCNS company specialising in the design, manufacture and installation of marine turbines generating renewable energy from tidal streams. The company vision is to deploy marine turbine farms under the surface of the oceans to produce energy silently, invisibly and with no impact on the environment. OpenHydro has achieved a number of industry firsts including being the first to deploy a tidal turbine at the European Marine Energy Centre (EMEC), the first to connect to and generate electricity from tidal streams onto the UK National Grid and the first to successfully demonstrate a method of safely and economically deploying and recovering turbines directly on the seabed. The deployment and recovery method delivers a step change in the economics of tidal energy. OpenHydro has a project portfolio spanning the USA, Canada, France, Ireland, Scotland and the Channel Islands with utility partners including Emera, EDF, Bord Gáis, SnoPUD and SSE Renewables. OpenHydro has won a number of awards for its innovations in the field of renewable energy technology.

DCNS believes that the sea is central to our planet’s future. As a world leader in naval defence and an innovator in the energy sector, the Group is developing advanced technology and solutions to secure the future and sustainably develop the planet’s potential. Its leadership is built on a proven ability to meet customer needs by combining exceptional know-how with unique industrial resources. DCNS designs and builds submarines and surface combatants, develops associated systems and infrastructure, and offers a full range of services to naval bases and shipyards. The Group has also expanded its focus into civil nuclear engineering and marine renewable energy. As a responsible corporate citizen, DCNS was one of the first major defence groups to achieve full certification to ISO 14001. The DCNS Group generates annual revenues of €3.4 billion and employs 13,600 people (2013 data).