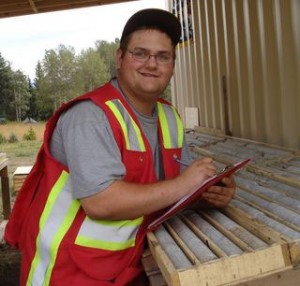 New Nadina Explorations Limited (TSX VENTURE:NNA) announce that an exploration work permit has been granted for the Silver Queen property located near Owen Lake south of Houston, BC.

The Company wishes to thank Jim Hutter, P.Geo., for his many years of assistance and support on the Silver Queen project. The Company is currently seeking a qualified person for the upcoming programs.

Peter Kowalczyk continues as the company geophysical consultant providing drill target guidance and support working with Nasreddine Bournas, PhD, PGeo, of Quantec Geoscience who summarized the 2011 and 2012 geophysical program. Nasreddine commented to the report, “The 3D DCIP inversion results supported by the MT inversions of the Titan 24 data acquired at Silver Queen show spectacular zones of chargeability high occurring in coincidence with zones of resistivity low and consistent with the evidence of the possible existence of a unique porphyry system of high tonnage of mineralization.”

During the next 10 months we plan to drill test three targets within the anomaly produced from the spring 2012 geophysical program (refer NR Mar 28, 2012 and plan map on company website). If warranted, trenching has also been permitted. Drilling in 2011 discovered the Itsit porphyry (Target B) with significant mineralized intersections carrying values in gold, copper and molybdenum. The geophysical program completed in March 2012 suggests that the Itsit porphyry is a body of considerable size that may include higher grade zones, the identification of which will be a major objective in the upcoming drill program. Targets A and C are adjacent (west and east) to the Itsit with both appearing to be near surface.

ON BEHALF OF THE BOARD