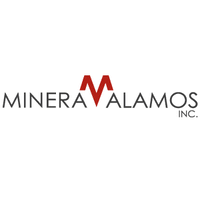 Minera Alamos Inc. (TSX-V: MAI) is pleased to report additional drill results from its Phase 2 drill program at the Santana gold project, Sonora, Mexico. The new holes were intended primarily to evaluate the southwest and southerly extensions of the Nicho main zone as the Company works to fully define the outer limits of the proposed Nicho pit. A deeper hole (S20-134) was also drilled to test the geological structures at vertical depths below most of the previous drilling completed at Nicho. Both objectives met with success as the Company continued to expand the known mineralization to the south-southwest while also demonstrating the depth potential of the Nicho pipe system with hole S20-134 finishing in strong mineralization at 314.7m (down hole).

“This initial phase of our ongoing drill activities at the Santana project was intended primarily to confirm the margins of the Nicho mineralization as we work to optimize open pit modelling for the pending start of mining operations. Rather than closing off the limits of the deposit in this area we have demonstrated significant potential for further expansion to the south and southwest” stated Darren Koningen, CEO of Minera Alamos. “Furthermore, hole S20-134 delineated the longest and deepest interval of mineralization ever drilled at Nicho extending down to a vertical depth of greater than 300 meters. This is well below the limits of the majority of previous drilling activity that focused on the definition of near-surface mineralization down to a depth of approximately 150m. The fact the hole remained in mineralization when it was stopped and has yet to encounter the deep gold-bearing intrusive material that we believe is the source of the gold is an extremely exciting development for the project. We look forward to using the recent information to update our models for the deposit and to prepare new rounds of drilling aimed not only at continuing to expand the growing mineralized area at Nicho but also to define the potential of a number of other Nicho-style breccia systems previously identified within the Santana project boundaries.” 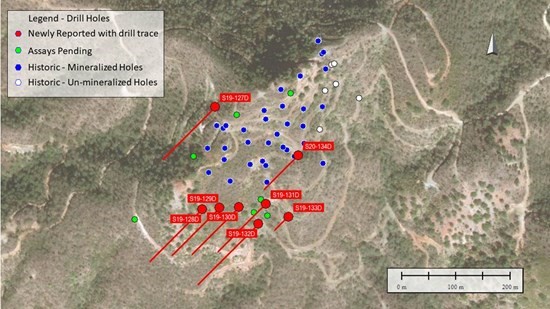 Hole S19-127 was drilled at an inclination of 50 degrees on the northwestern margin of the Nicho zone and was intended to provide additional definition of the limit of the mineralization in this area for the planning of the Nicho open pit operations. The drill hole encountered multiple zones of minor mineralization within the andesitic host rock with the exception of a deeper interval grading 0.58 g.t gold over 17.7m.

Six holes (S19-128 to S19-133) were drilled to further define the southwest extensions to Nicho identified in 2018 and to test the outer margins of the Nicho mineralized breccia pipe to the south. All drill holes were completed at an inclination of 45 degrees (except S19-133 – inclined at 80 degrees) and all encountered significant zones of near-surface gold mineralization within the brecciated andesite zones. Total mineralized intervals for each hole ranged from 35 to 101m with average gold grades of 0.29 to 0.75 g/t. The application of a typical open pit heap leach cut-off grade of 0.15 g/t gold results in composited mineralized intervals ranging from 10 to 73m with gold grades of 0.72 to 1.4 g/t. Given the success of this step out program the Company will be evaluating opportunities for further expansion of the Nicho deposit to the south and southwest.

Hole S20-134 (75 degree inclination) was collared close to the previously interpreted eastern extents of the Nicho zone mineralization and intended to probe the deeper geological structures below the previously drilled areas. The hole delineated the deepest mineralization (+300m vertical) ever encountered within the Nicho target area and ended in open mineralization. Gold was hosted almost entirely within brecciated andesite structures and the current drilling has yet to encounter the deeper gold-bearing intrusive rock believed to be the source of the mineralization throughout the Nicho and nearby breccia structures. The hole returned 248m of 0.60 g/t gold and finished in open mineralization. The application of a typical open pit heap leach cut-off grade of 0.15 g/t gold results in 121m of 1.2 g/t gold.

The Company is currently awaiting results from additional holes drilled at Nicho and Divisadero and will report them in due course. Drill sections will be added to the Company website in the coming days.

The Mexican federal government has extended the closure of all non-essential businesses until May 30, 2020 with the exception of businesses operating in municipalities with low or no cases of COVID-19 transmission, which may re-open on May 18, 2020. Currently, Minera Alamos is preparing to recommence construction activities at the Santana project area on or about May 18, 2020.

The Mexican federal government has created strict hygiene and health protocols to protect personnel, which Minera has and will continue to follow. Minera has also developed and implemented additional protocols for the protection of its workforce and communities where it operates. To date, there are no known cases of COVID-19 infection at any of the Company’s operations, projects or corporate offices.

Aside from the resumption of construction activities, Minera expects drilling to recommence to follow up on areas identified by the success of holes outlined in this release and also to finalize plans to drill other breccia pipes on the property. The details of the additional drilling outside of the Nicho area will be made available in a future news release.

All diamond drill samples were collected by Minera Alamos personnel including the Company’s exploration geologists. Drill core samples were cut in half and divided into typically 1-2m intervals. One half of the sample was bagged for analysis and the remaining half was logged by Minera Alamos personnel and stored for future reference. Blanks, duplicates, and standards were randomly inserted with the samples sent for analysis as part of the normal QA/QC procedures.

All samples were prepared and analyzed for gold using fire assaying with AA/gravimetric finish in addition to a standard 35-element ICP suite. All samples were sent for sample preparation at the ALS-Chemex facility in Hermosillo, Mexico.

Mr. Darren Koningen, P. Eng., Minera Alamos’ CEO, is the Qualified Person responsible for the technical content of this press release under National Instrument 43-101. Mr. Koningen has supervised the preparation of, and has approved the scientific and technical disclosures in, this news release.

Minera Alamos is a gold development company poised to join the ranks of gold producers in 2020. The Company has a portfolio of high-quality Mexican assets, including the 100%-owned Santana open-pit, heap-leach development project in Sonora that is currently under construction, and which is expected to have its first gold production in late 2020 or early 2021. The La Fortuna open pit gold project in Durango (100%-owned) has an extremely robust and positive preliminary economic assessment (PEA) completed and is nearing the end of the permitting process. A construction decision on La Fortuna could be made in late 2020 or early 2021 and highlights the organic growth the existing projects can provide to the overall production profile. Minera Alamos is built around its operating team that together brought 3 mines into production over the last 12 years.

The Company’s strategy is to develop low capex assets while expanding the project resources and pursue complementary strategic acquisitions.