Lumina Gold Corp. (TSX-V: LUM) (OTCQX: LMGDF) is pleased to announce the signing of an Exploration Investment Protection Agreement for the Cangrejos project. This groundbreaking agreement between the Government of Ecuador and Lumina Gold provides a foundation that the parties can build on as the Project advances towards development and a future negotiation of the Exploitation Agreement and Exploitation Investment Protection Agreement required for mining. This negotiation would occur after the completion of a Pre-Feasibility study for the Project.

The EIPA explicitly covers an investment commitment by Lumina totaling a minimum of US$36M for the period 2019-2024 and also covers investments by the Company in Ecuador from December 2010 to the end of 2018. The agreement also extends to any additional investments made by Lumina during the term and beyond. The Company has invested approximately US$18M from January 1, 2019 to September 30, 2021 in Ecuador and just completed a financing to continue work on drilling and engineering in order to complete a Pre-feasibility study by early 2023. 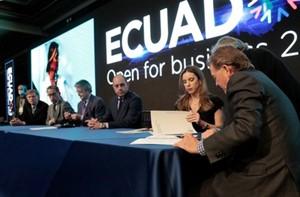 Image 2: Marshall Koval and Guillermo Lasso, President of Ecuador at the Open For Business conference. 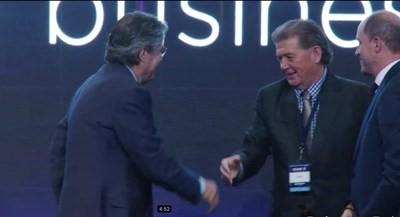 Under the terms of the EIPA, the Government of Ecuador pledges to maintain legal certainty and stability for the investment, as well as to provide non-discriminatory treatment compared to other similar projects with regards to the administration, operation, expansion, and transfer of the Company’s investments. In addition, the Government commits that it will not subject the Company and its investments to arbitrary or discriminatory measures. The guarantee also extends to property rights, which bars any confiscation or other termination of rights without fair compensation, and also forbids restrictions on the legal transfer of the investment (e.g., the project or local holding companies) by the Company or its shareholders. The agreement also contains detailed procedures for dispute resolution, with arbitration in London pursuant to the rules of the International Chamber of Commerce.

The process of entering into this EIPA was greatly accelerated under the leadership of Guillermo Lasso´s administration, particularly following the issuance of Decree 151, which defined the national Mining Action Plan. It involved direct negotiations with the Ministry of Production, Foreign Commerce, Investments and Fishing. In addition, approvals were obtained from the Strategic Committee for Promotion and Attraction of Investments, as well as the Ministry of Energy and Non-Renewable Natural Resources, the Ministry of Economy and Finance, and, lastly the State Attorney General in relation to the approval of the international arbitration clause.

Lumina Gold Corp. is a Vancouver, Canada based precious and base metals exploration and development company focused on the Cangrejos Gold-Copper Project located in El Oro Province, southwest Ecuador. Lumina has an experienced management team with a successful track record of advancing and monetizing exploration projects.