Kintavar Exploration Inc. (TSX-V:KTR), is pleased to announce the assays of the first 4 drill holes from its 2017-2018 winter drilling program. Twelve diamond drill holes totalling 1,771 m have been realized on the Sherlock and Watson areas.

The favourable sedimentary unit has been intersected by 8 diamond drill holes in the Sherlock area starting from surface and covering over 200 m in width, 200 m in length and 175 m in vertical depth and the unit remains open to the East, West and at depth (figure 1). The sedimentary unit is composed of the calcitic marble enriched in phlogopite/biotite which carries the majority of the copper mineralization and the generally less mineralized calc-silicate units mainly composed of diopside, phlogopite/biotite, feldspar and variable amounts of quartz, scapolite and wilsonite. These horizons are deformed and folded and the alternating sequence of marble and calc-silicate units with locally some levels of gneiss, can be well observed in the core ranging from meters to tens of meters. 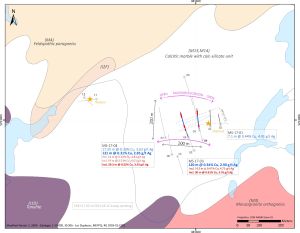 Copper mineralization observed in the drill holes ranges from trace to 5% in the form of bornite and chalcopyrite with traces of chalcocite. Pyrite has been observed only locally with less than trace and rarely near 1%.

Summary of the main intercepts from the first 4 drill holes is presented in the table below. Drill holes MS-17-01 and 02 have intersected a folded calc-silicate unit and have been stopped once they attained their geophysical targets. Drill hole MS-17-03 demonstrated that mineralization extends farther than expected and as a result the extension of MS-17-01 and 02 is planned for the next drilling campaign.

The same favorable lithological unit has been intersected at the Watson target in both drill holes. Assays are pending.

« We are very excited about this discovery. The identification of this new copper mineralized system within a unique context in Quebec confirms our field observations. The potential of the Sherlock/Watson area to host a copper deposit, not to mention of the entire 20 km long sedimentary basin, from Sherlock to Nasigon, is now clear and very promising. The development of these targets now becomes priority for Kintavar.» comments Alain Cayer, Vice-President Exploration of Kintavar Exploration.

All samples have been sent and prepared (PREP-31) by ALS Global laboratory in Val-d’Or. The pulp was sent to ALS Global laboratory in Vancouver for copper assays (CU-ICP61), silver assays (AG-ICP61) or a multi-elemental analysis by four acid digestion (ME-ICP61) and spectroscopy (ICP-AES/MS). Samples with assays higher than 10,000 ppm Cu were reanalyzed by atomic absorption (CU-OG62) at the ALS Global Vancouver laboratory. Quality controls include systematic addition of blank samples and certified copper standards to each batch of samples sent to the laboratory.

About the Mitchi Property

The Mitchi property (approx. 21,000 hectares, 100% owned) is located west of the Mitchinamecus reservoir, 100 km north of the town of Mont-Laurier. The property covers an area of more than 210 km2 accessible by a network of logging and gravel roads with a hydro-electric power substation located 14 km to the east. The property is located in the north-western portion of the central metasedimentary belt of the Grenville geological province. Many gold, copper, silver and manganese mineralized showings have been identified to date, with many characteristics suggesting of a sediment-hosted stratiform copper type deposit (SSC) in the Eastern portion of the property and Iron Oxide Copper Gold ore (IOCG) and skarn type deposits in the Western portion. Osisko Mining holds a 2% NSR on 39 claims and 1% NSR on 21 other claims of the Mitchi property.

Alain Cayer, P. Geo., MSc., Vice-President Exploration of Kintavar, is the Qualified Person under NI 43-101 guidelines who supervised and approved the preparation of the technical information in this news release.