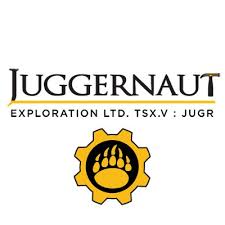 Juggernaut Exploration Ltd (TSX-V:JUGR) is pleased to announce the results from its 2021 maiden exploratory drill program on its 100% controlled Gold Standard property situated along the Central Coast of British Columbia. A total of 11 shallow exploratory holes were drilled, all of which intersected significant widths of anomalous gold and polymetallic mineralization and/or quartz-chlorite-sulphide veining on the Goldzilla Hinge Zone. Drill hole GSD-21-10 intersected 2.146 gpt Au (2.302 gpt AuEq) over 6.5 m including 3.284 gpt Au (3.498 gpt AuEq) over 4.0 m and 8.210 gpt Au (8.638 gpt AuEq) over 1 m. The Goldzilla Zone has been traced on surface for 800 m with a vertical relief of 300 m and remains open both to the southeast and to depth. A small faction of the Goldzilla vein has been tested on strike and to depth to date. The 2021 drilling focused on the Hinge Zone was successful in confirming the gold mineralized vein for 60 meters along strike and 55 m to depth and remains open.

The 2021 maiden exploration drilling consisted of 11 shallow drill holes totalling 1203 m, which were designed to test the Goldzilla Hinge Zone, a small section of the 800 m Goldzilla Vein. All holes intersected anomalous high gold polymetallic mineralization and/or quartz-chlorite-sulphide veining confirming the presence of a new orogenic gold system which remains open both along strike to the southeast and down dip. The Gold Standard property comprises multiple extensive shear-hosted orogenic quartz-chlorite-sulphide veins up to 20 m wide and 1000 m long outcropping at surface (Goldstandard Overview Map Veins). Of these veins, only a small section of the Goldzilla has been drill tested to date (60 m of strike and 55 m down dip) leaving the majority of this vein unexplored along strike and at depth. The property is located in a key geologic setting along a regional scale under-explored high strain zone that extends for more than 100 km in a NNW-SSE direction. (2021 Video Link Here).

This mineralized orogenic system is part of a regional high strain zone, a brittle and ductile, sub-vertical shear zone system that is proximal to the boundary between the Intermontane and Insular superterranes, demarked by the Coast Shear Zone. Localization of high strain zones within the system are associated with sheeted, oxidized, sulphide-bearing quartz veins and shear zones that have been identified in outcrop with a strike length of 4.6 km and 1.5 km wide, which remains open in all directions. Discrete gold bearing quartz veins and shears trend up to ~1 km in strike with 500 m of vertical extent and are up to 20 m in width. They host variable amounts of gold mineralization, oxidized pyrite and disseminated pyrite with chalcopyrite. Extensive regions of snow-pack abatement and glacial recession along the regional under-explored high stain zone provide for extensive areas recently exposed with excellent discovery potential. (High Strain Zone).

The 2021 inaugural drill program and additional prospecting and mapping has further confirmed the presence of a strong gold mineralized orogenic system that remains largely unexplored on Goldstandard providing for tremendous additional discovery potential both on surface and at depth. Based on results from the maiden shallow exploratory drilling, an additional follow up drill program is recommended on Goldzilla to outline the gold mineralization in the 3rd dimension both along strike and to depth. Future maiden drilling is also recommended to test the gold potential of the nearby Kraken and Phoenix veins (Phoenix Outcrop) as well as the Leviathan and East veins.

Results from the Gold Standard property have confirmed the presence of a strong gold mineralized orogenic system on the Gold Standard property at surface and at depth where veins occur in an en-echelon pattern to the regional north-northwest orientation of the major shear zones. The prolonged faulting and shearing within this under-explored regional high strain zone on the Gold Standard property provided extensive conduits for mineralizing fluids and favourable sites for mineralization (shears Image). These orogenic characteristics are consistent with gold-bearing mineralized veins and shear zones. Orogenic gold system are often deep rooted and are mined to depths of 1 to 3 km (Tectonic Setting). Approximately 67 % of Canadian gold production comes from orogenic systems in world class geologic settings, with examples including the nearby Bralorne Pioneer Camp in British Columbia (4.17 Moz) with depths to ~2 km, and many regions within the Canadian shield including Kirkland Lake (>40 Moz) (kirkland Lake), Timmins (>70 Moz), Val d’Or/Noranda (>69 Moz) and Red Lake gold camps (>29 Moz). These gold deposits typically contain average mining grades of ~5 gpt Au to ~15 gpt Au.

Juggernaut Exploration’s 100 % controlled Gold Standard property is an original discovery with no previous recorded work in the area and is situated 1 km north of tidewater along the Central Coast of British Columbia approximately 4 km from major infrastructure.

Dan Stuart, President and CEO of Juggernaut Exploration, states: The results from the maiden exploration drilling on Goldstandard has confirmed gold mineralization in the subsurface. This shallow exploratory drilling on the Goldzilla Hinge Zone has barely begun to scratch the surface on this extensive orogenic gold system. We look forward to unlocking the full gold potential by drilling Goldstandard in 2022 and beyond, the next exploration season is shaping up to be an exciting one.

Rein Turna P. Geo is the qualified person as defined by National Instrument 43-101, for Juggernaut Exploration projects, and supervised the preparation of, and has reviewed and approved, the technical information in this release.

Oriented HQ-diameter diamond drill core from the drill campaign is placed in core boxes by the drill crew contracted by the Company. Core boxes are transported by helicopter to the staging area, and then transported by truck to the core shack. The core is then re-orientated, meterage blocks are checked, meter marks are labelled, Recovery and RQD measurements taken, and primary bedding and secondary structural features including veins, dykes, cleavage, and shears are noted and measured. The core is then described and transcribed in MX DepositTM. Drill holes were planned using Leapfrog GeoTM and QGISTM software and data from the 2017-2019 exploration campaigns. Drill core containing quartz, chlorite-schist, sulphide(s), or notable alteration are sampled in lengths of 0.5 to 1.0 meters. Core samples are cut lengthwise in half, one-half remains in the box and the other half is inserted in a clean plastic bag with a sample tag. Standards, blanks and duplicates were added in the sample stream at a rate of 20%. All samples, including core, rock grabs, channels and talus samples, are transported in rice bags sealed with numbered security tags. A transport company takes them from the core shack to the ALS labs facilities in North Vancouver or MSA labs facilities in Langley. ALS (and MSA) is either Certified to ISO 9001:2008 or Accredited to ISO 17025:2005 in all of its locations. At ALS (and MSA), samples are processed, dried, crushed, and pulverized before analysis using the ME-ICP61 and Au-ICP21 (ICP-130, ICA-5Ag, and FAS-124) methods. Overlimits are re-analyzed using the ME-ICP61, Au-ICP21, and Ag-GRA21 (FAS-428, ICA-6Ag, and FAS-425) methods. If Gold is higher than 5 gpt, the labs will re-analyze using Metallic Screening Au-SCR24C (MSC-150) method. The reader is cautioned that grab samples are spot samples which are typically, but not exclusively, constrained to mineralization. Grab samples are selective in nature and collected to determine the presence or absence of mineralization and are not intended to be representative of the material sampled.