Jordan Roy-Byrne – “Bearish Sentiment Can Only Take Gold so Far”

Jordan Roy-Byrne – “Bearish Sentiment Can Only Take Gold so Far”

Despite its lack of bullish fundamentals and the poor price action, Gold is now technically oversold and has reached strong support with sentiment approaching potentially extreme levels. The conditions are in place for a rally. That being said, bearish sentiment by itself is not enough to push Gold beyond a relief rally.

While the combination of the net speculative position (CoT) and daily sentiment index (DSI) was near its lowest point at the end of 2015, Gold enjoyed its best gains then because its fundamentals turned and remained bullish. Real interest rates declined as the Fed, after its December 2015 hike, did not hike for another 12 months despite a pickup in inflation.

Sentiment was perhaps just as bearish in June 2013 but that did not trigger anything more than a relief rally as fundamentals remained bearish. The same could be said for summer of 2015. 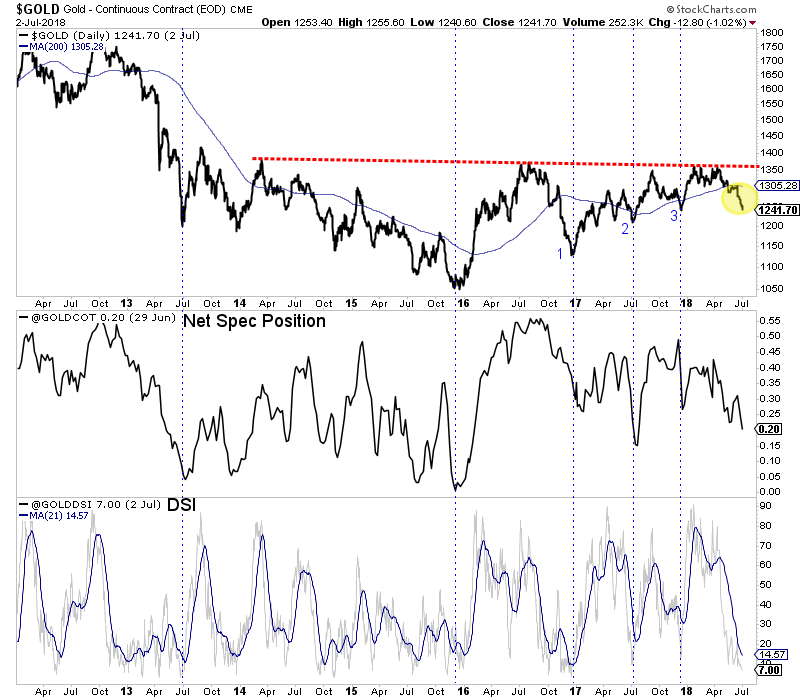 Following 2016, Gold’s fundamentals were no longer bullish as real interest rates began to rebound. Fed hikes were (at worst) keeping pace with inflation.

Gold’s next three important lows (denoted as 1,2,3 on the chart) gave way to rebounds thanks to extremes in sentiment, but more importantly, declines in the US Dollar. 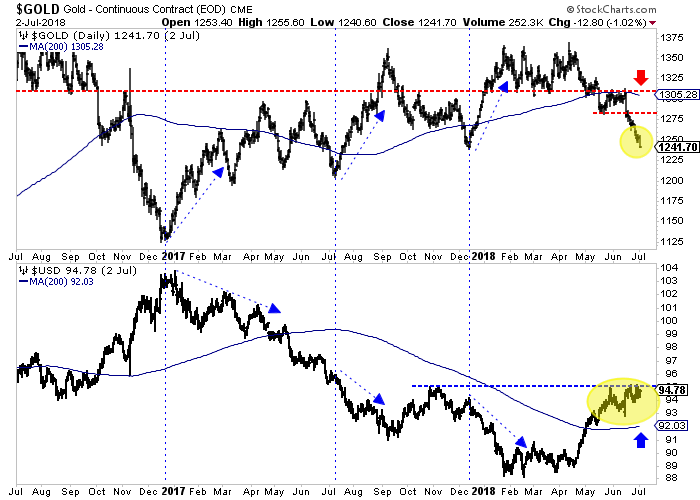 Yes, Gold is very oversold and should enjoy a strong July.

However, without the backdrop of strong fundamentals and now a weak dollar (which saved Gold in 2017), rallies are just that. Rallies.

When or how could that change?

Our view is Gold will enter a bull market when the Federal Reserve is done hiking rates.

Unless fundamentals somehow change during the summer, we would use the coming strength to de-risk portfolios. Given our cautious views on the sector we have narrowed our focus to a small group of companies, capable of performing well in this environment, while preserving cash to buy the bargains that could come at the end of the year. To follow our guidance and learn our favorite juniors for the next 6 to 12 months, consider learning about our premium service.