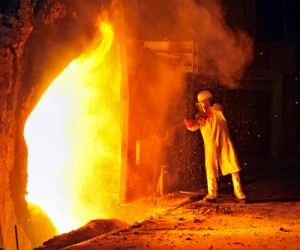 Benchmark iron ore on Tuesday continued to trade weaker, giving up $0.30 to settle at $117.90, the lowest level since October 23.

Despite the correction today’s import price for 62% fines at China’s Tianjin port still represents a substantial improvement since the commodity sunk to a three-and-a-half year low of $87.50 at the start of September.

The rally in the steelmaking ingredient was driven by re-stocking in the world’s second largest economy ahead of massive planned infrastructure spending, but news out on Tuesday shows that serious imbalances in the industry persist.

China’s National Bureau of Statistics of China released data showing aggregated profits in the country’s ferrous metals industry decreased by a staggering 60.3% during the first ten months of 2012 compared to last year.

Steelmakers were hardest hit with the smelting and processing sector achieving profits of $3.27 billion, down more than 82% year on year according to the Chinese National Development and Reform Commission.

NDRC figures show that miners emerged relatively unscathed and at total profits for the first nine months of just over $10.5 billion, declines were kept to a low 5.5%.

The relative strength of the highly fragmented Chinese iron ore mining industry comes despite the fact that many miners have to deal with cash costs of minimum $80 and for many mines twice that number.

With the dynamics of the industry changing domestic Chinese producers are losing share against the import market. A survey of the top 55 steel mills shows that they now import almost 90% of their requirements, up from 70% at the start of the year.

The annual seaborne iron ore trade is just over 1 billion tonnes. Of that almost 60% end up at Chinese ports.

The big three suppliers – Vale, Rio Tinto and BHP Billiton – which completely dominate the global trade mine ore for $40 – $50 a tonne.