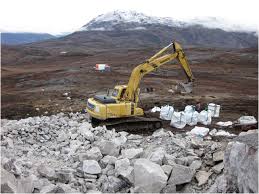 HUDSON RESOURCES INC. (TSX-V:HUD) (OTCQX:HUDRF) is pleased to announce that the Government of Greenland, the Qeqqata Municipality and Hudson Resources have now signed the recently approved 30-year exploitation license and the Impact Benefit Agreement for the White Mountain anorthosite project.

The signing ceremony was held on September 24th at the Greenland School of Minerals and Petroleum in Sisimiut, Qeqqata Kommunia, in front of the mining students and faculty. The agreements were signed by Hermann Berthelsen, Mayor of the Municipality of Qeqqata, the Minister of Finance and Resources, Anda Uldum, the Minister for Industry, Labour and Trade, Vittus Qujaukitsoq and James Tuer, the president of Hudson. The Ministers were included via a video link from Nuuk, Greenland’s capital. Links to the event are provided below.

James Tuer, Hudson’s President, stated, “The signing of these documents represents a major accomplishment for the Company as we work towards putting the project into production. It is very satisfying to witness the level of support and enthusiasm that this project has received from the local communities. Having the signing ceremony in the mining school surrounded by the students was a special moment and reflects the importance of this mine to Greenland. We now have a permitted, low cost project supported by our first long-term purchase agreement. This puts the company in an enviable position in the mining industry given the current challenging commodities market.”

The White Mountain anorthosite is unique in nature due to the size and purity of the body. When used for the production of E-Glass fiberglass it will allow our customers to lower their CO2 output and operating costs, along with several other attributes that makes it an exceptional feed material.

The White Mountain project is 100% owned by Hudson through its subsidiary, Hudson Greenland A/S. The project is permitted and has a 60M tonne resource of high quality and purity anorthosite, which has applications in the production of E-Glass fiberglass, fillers and coatings, and for the production of alumina.