Hawkmoon Discovers a New Gold Zone Assaying 83.6 Grams Per Tonne Gold and at the Midrim Showing on the Wilson Property in Québec’s Abitibi Greenstone Belt

Hawkmoon Discovers a New Gold Zone Assaying 83.6 Grams Per Tonne Gold and at the Midrim Showing on the Wilson Property in Québec’s Abitibi Greenstone Belt

Hawkmoon Resources Corp. (CSE:HM) (FSE:966)  has received the final assay results for the final two drill holes from its 2021 drill program at the Midrim Showing on the Wilson Gold project. The Property is situated approximately 15 kilometres east of the town of Lebel-sur-Quévillon, Québec and 170 kilometres northeast of the city of Val-d’Or, Quebec in the Abitibi Greenstone Belt.

Highlights of the Holes Disclosed in this News Release

Figure 1 provides a map which shows the location of the Holes drilled by Hawkmoon at the Midrim last summer. The map also shows the individual drill hole gold intercepts and defined gold zones at the Midrim. Hawkmoon has increased the size of the Midrim with the five (5) Holes it drilled in 2021. 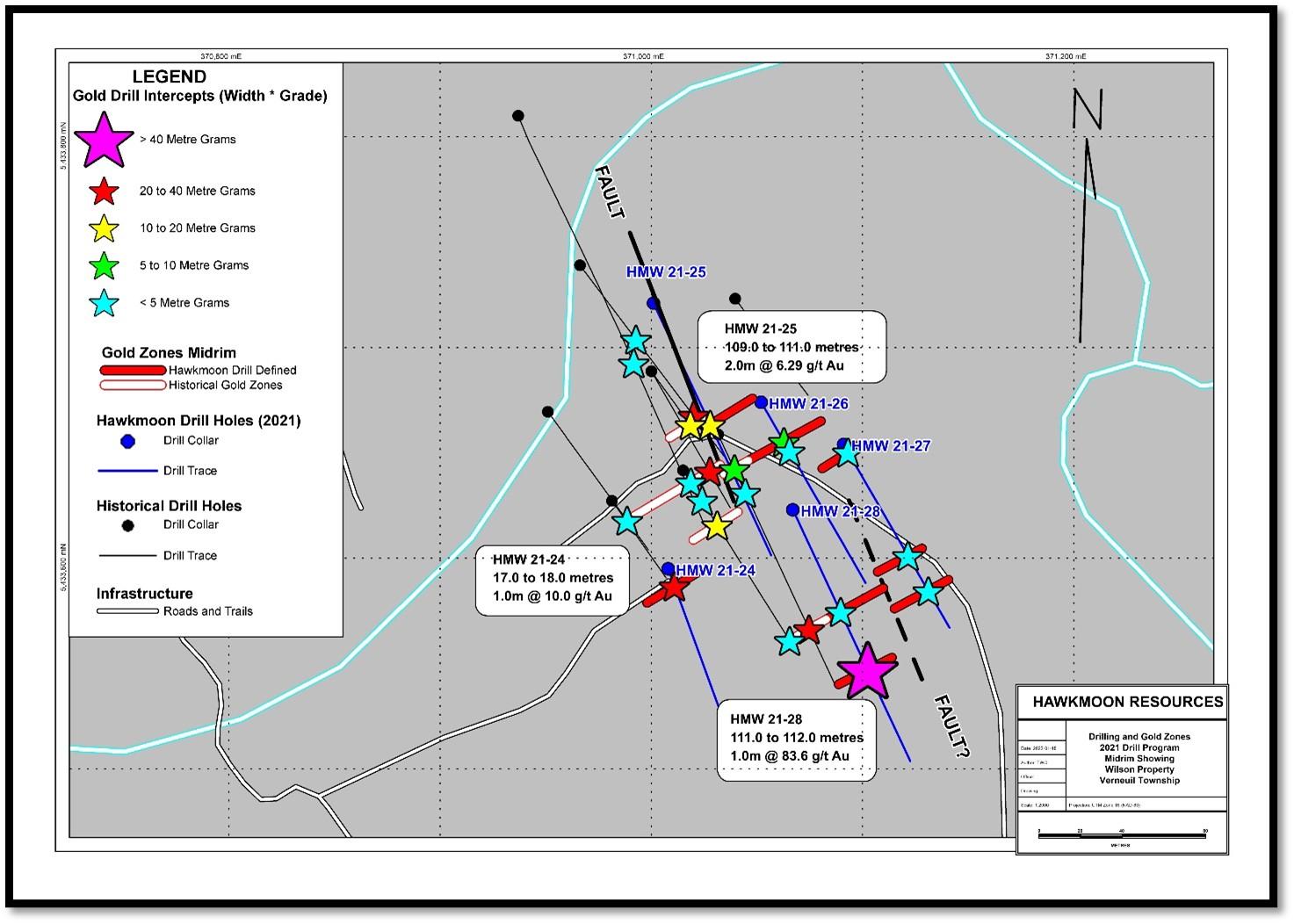 Table 1 highlights certain gold assays received for the Holes. The results represent down-hole lengths and not necessarily true widths. A map showing the locations of the Holes follows the assay table in Figure 2. 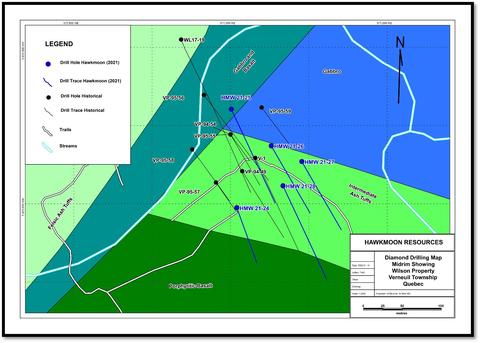 The Midrim is situated where a volcanic tuff contacts a gabbro or dioritic intrusion. The most prospective areas of the Property are along the contacts between volcanic tuffs and intrusions. The Midrim can strike either northeast-southwest or east-west. Rocks at the Midrim dip sub vertically.

The Holes intercepted Midrim mineralization. This Mineralization is characterized as a beige to pale grey coloured volcanic tuff which has been strongly foliated, sheared, fractured and altered. Mineralization at the Midrim is associated with strong silica, sericite and calcite alteration. Ankerite and chlorite alteration are present to a lesser degree. The Mineralization often displays a striped appearance due to abundant parallel laminations. This appearance is most dramatic in areas with quartz veins intruding areas of increased local chlorite alteration. Pyrite is the dominant sulphide mineral. Chalcopyrite is observed to a lesser degree with visible gold being present locally. Quartz veins as well as quartz veinlets occupy a significant portion of the Mineralization. These veins contain sulphide minerals and are orientated parallel or sub parallel to the foliation.

Branden Haynes, President of Hawkmoon, states: “Discovering a new gold zone is an excellent way for Hawkmoon to cap off our first drill program at Wilson. The program was a great success and has generated drill targets for the follow up drill program this summer.”

Hawkmoon is focused entirely on its three Quebec gold projects. Two of these projects are located in one of the world’s largest gold endowed areas, the Abitibi Greenstone Belt. Both these gold projects are accessed by government-maintained roads and are in close proximity to each other east of the town of Lebel-sur-Quévillon. The third project is situated in the Belleterre Gold Camp southwest of Val-d’Or.