Hawkmoon Resources Corp. (CSE:HM) (OTCQB:HWKRF) (FSE:966) is pleased to announce that Mr. Thomas Clarke, VP of Exploration, is now at the Wilson Gold Property to supervise the commencement of the trenching program at the Property. The Trenching is proposed to examine a series of targets of interest in underexplored areas of the Property. Gold showings on the Property are present at the interface of volcanic rocks and a gabbro sill. These rocks have been folded into a large structure with both the Toussaint and Midrim gold showings situated on the southern limb of this fold structure as shown in figure 1. 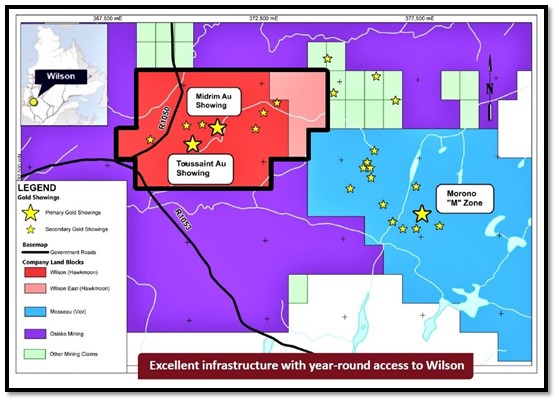 Hawkmoon will commence the Trenching by trying to locate the old drill collar of VP 94-51 and working outwards from this known starting point. Two near surface gold intercepts in this old hole identified a gold zone as outlined by table 1 that Hawkmoon plans to attempt to map along strike. Hole VP 94-51 was drilled before the introduction of NI 43-101 and the results are treated as historical.

IP anomalies with a moderate metallic factor (chargeability and resistivity) from an IP survey completed in 2011 by Viking Gold. 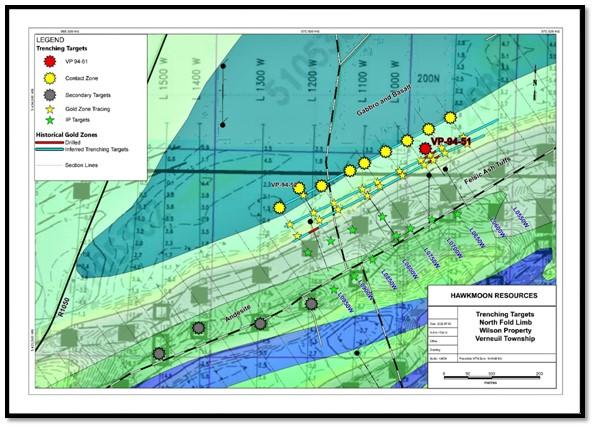 Figure 2: Detailed map of the trenching targets on the northern limb of the fold
Hawkmoon anticipates commencing drilling on Wilson in the middle of July. The Company has contracted Faubert & Fils Inc for diamond drilling services. The Company used Faubert & Fils Inc. for each of its previous drill programs at the Property and at the Lava Project near Belleterre, Québec.

Branden Haynes, President of Hawkmoon, states “July is the start of our summer work season, and the Company is looking forward to positive results. The objective of the Trenching Program is to extend a historical gold zone, aiming to dig around the contact between the volcanics and gabbro and examine a series of IP anomalies with a favourable signature.”

Hawkmoon is focused entirely on its two Quebec gold projects. Wilson Gold Project is located in one of the world’s largest gold endowed areas, the Abitibi Greenstone Belt. The Wilson is accessed by government-maintained roads and is in close proximity to the east of the town of Lebel-sur-Quévillon. The second project is situated in the Belleterre Gold Camp southwest of Val-d’Or.