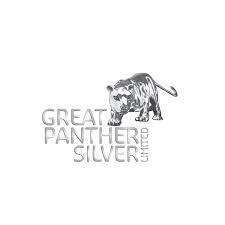 GREAT PANTHER SILVER LIMITED (TSX: GPR) (NYSE American: GPL) reports the results of the Preliminary Economic Assessment for its 100% owned Coricancha gold-silver-lead-zinc-copper underground mine and mill complex.  Coricancha is located approximately 90 kilometres east of Lima, Peru, and was acquired by Great Panther in June 2017.  Coricancha has a 600 tonne per day processing plant and is fully permitted for production.  Production was suspended at Coricancha in 2013 by the previous owner.  The PEA will be filed on SEDAR and EDGAR within 45 days of this news release.

“We are very pleased with the results of the Coricancha PEA as it confirms the potential for average annual production of three million silver-equivalent ounces and estimates an after-tax internal rate of return in excess of 80%, with low capital costs”, stated James Bannantine, President and CEO.  “We look forward to advancing Coricancha by building on the PEA and gaining a better understanding of the potential of the project as we begin preparations for full-scale mining and milling.”

With the PEA completed, Great Panther has decided to advance the project with the initiation of a trial stope and bulk sample program (the “Bulk Sample Program”) early in the third quarter of this year to further de-risk the project.  The objective of the Bulk Sample Program is to provide confirmation of expectations regarding throughput, grades, and recoveries.

The PEA involved an in-depth review of underground development and mining methodologies, ore and waste handling, ore processing, tailings treatment and handling, environmental and social aspects, costs and sensitivities.  The PEA focuses on the restart of Coricancha using existing processing plant infrastructure and a relatively small portion (approximately 28%) of the overall existing Mineral Resources (see press release dated December 20, 2017 and Cautionary Statement below) which are accessible through additional development work from existing mine workings.  The focused mine plan provides insight as to the ability of Great Panther to restart Coricancha based on a relatively low initial capital investment which can be funded entirely from the Company’s current cash reserves.  In the event the mine is returned to production, the development work in the PEA is expected to provide the opportunity to incorporate a greater portion of the existing resources into an expanded mine plan with a longer mine life.  It is also expected to provide the access to conduct underground drilling, which may provide further opportunity to both add Mineral Resources, as defined by NI 43-101 and CIM Definition Standards (see Cautionary Note to United States Investors below) and extend the mine life.

Great Panther will leverage its expertise in developing and operating underground, narrow vein mines in Mexico to advance Coricancha.  The existing infrastructure in place includes a crushing and grinding plant, flotation and bio-oxidation plant, electrical and water supply, plus existing mine access development.  With development associated with the Bulk Sample Program starting in 2018, and following a successful outcome, the Company expects to be able to make a decision in early 2019 to commence the restart of Coricancha.  The Company presently does not plan to complete a feasibility study in connection with any production decision due to (i) the existing processing plant facility, (ii) the ability to move ahead to development and production based on low initial capital costs, and (iii) the Company’s knowledge of the mine and resource base.

The PEA was prepared by Golder & Associates Inc. based on the updated Mineral Resource Estimate.  All amounts in this news release are in U.S. dollars (“USD”) unless otherwise noted.  The summary of the PEA results is presented in the tables and charts below:

Note:  Silver equivalent, gold equivalent, and by-product credits used in the calculation of Cash Costs and All-in Sustaining Costs are based on Base Case Metal Price Assumptions as described in Table 1 above.

The PEA contemplates the use of standard cut-and-fill and resue mining techniques providing ore to support a target annual throughput rate of 550 tonnes per day to the mill.

Milling consists of conventional flotation and bio-oxidation plant.  All processing material exits the mine via an underground ore pass system ending on the 140 level (the exit portal from the mine to the plant).  This run-of-mine material is hauled by rail to be deposited in an underground bin, which feeds the primary jaw crusher.  A ball mill, located near the adit entrance, is used to grind the material for pumping downhill to the concentrator.

Final saleable products include lead, zinc, and copper concentrates, as well as gold-silver dore.  The average annual production from Coricancha is estimated at 3.1 million silver-equivalent ounces over the life-of-mine.

All permits are in place to restart the project.  The Company is currently in discussions with Peruvian authorities regarding modifications to the closure plan for certain legacy tailings facilities of the mine.  The PEA economics include the closure costs attributed to the mine plan and exclude the closure expenses associated with legacy operations which are reflected on the Company’s balance sheet.  With regard to the latter, the Company has an agreement with the previous owner of Coricancha to fund a portion of these closure costs related to certain legacy tailings facilities.  The Company has also been engaging the local communities to maintain effective communications, and to ensure alignment of interests of all parties as the project advances.

Given that there is a processing plant in place, existing infrastructure, and a history of recent production (up to 2013), total capital costs are relatively small.  The estimated initial capital expenditures of $8.8 million primarily comprise an internal ramp and ore pass system required to upgrade and improve the materials handling system.  Life of mine sustaining capital is estimated to be $23.6 million.

Using the Base Case Metal Price Assumptions from Table 1, the mine is estimated to generate an after-tax net present value (“NPV”; 7.5% discount rate) of $16.6 million and an after-tax internal rate of return of 81%.  The project also has additional tax attributes that have not been incorporated in the PEA that could further improve economics.  Charts 1 and 2 below provide sensitivities to the NPV and IRR, respectively. 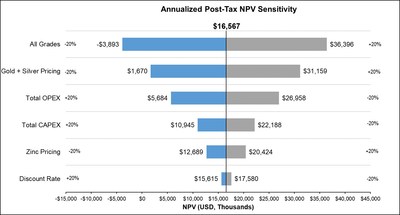 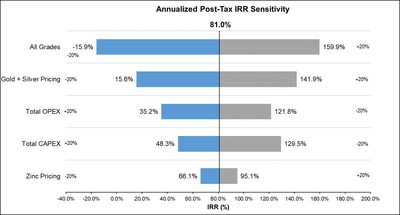 The Company has identified several opportunities to further enhance the economics of Coricancha and increase the life of mine. These include:

Great Panther engaged Golder & Associates Inc. to complete the NI 43-101 PEA for Coricancha.  Samuel Mah, P.Eng., Great Panther’s Vice President of Corporate Development, is the Qualified Person under the meaning of NI 43-101 who reviewed and approved this press release.  Ronald Turner, P.Geo., Daniel Saint Don, P.Eng., and Jeffrey L. Woods, SME, MMSA, are the independent Qualified Persons for the PEA, and are co-authors of the technical report.

Great Panther Silver Limited is a primary silver mining and exploration company listed on the Toronto Stock Exchange trading under the symbol GPR, and on the NYSE American under the symbol GPL.  Great Panther’s current activities are focused on the mining of precious metals from its two wholly-owned operating mines in Mexico: the Guanajuato Mine Complex and the Topia Mine.  The Company is also evaluating the restart of the Coricancha Mine in Peru, which it acquired in 2017, and continues to pursue the acquisition of additional mining operations or projects in the Americas.