GREAT ATLANTIC RESOURCES CORP. (TSXV.GR)   (FRA: PH01 )is pleased to announce that during the year 2020 when opportunity arose it immediately staked ground that became available. This has resulted in an additional five mineral licences, totalling 5,025 hectares, within the central Newfoundland gold belt. 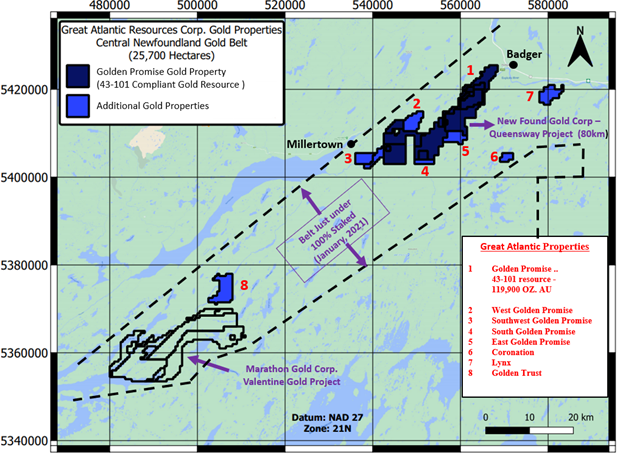 The Coronation Lake Property – Licence 031208M (500 hectares) is located approximately 14 kilometers east of the southern region of the Golden Promise Property. The property was staked to cover reported gold soil geochemical anomalies and two gold-silver-molybdenum-copper mineral occurrences. The property is reported to be underlain by the Neoproterozoic Crippleback Intrusive Suite. Reported highlights include:

The West Golden Promise Property – Licence 031549M (1,425 hectares) is located adjacent to the western region of the Golden Promise Property. Gold anomalies were reported for 2005 humus samples within the property (up to 54 ppb gold reported). A 2005 soil sample collected within 100 meters of the eastern boundary of the property was reported to return a highly anomalous value of 0.559 ppm gold. 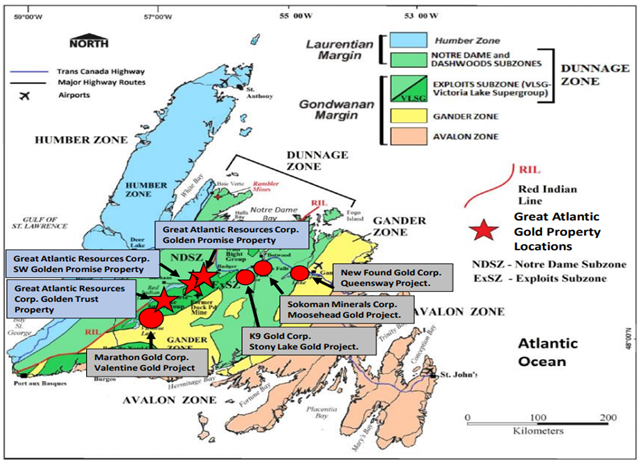 The Company’s five new properties and the Company’s Golden Promise, Southwest Golden Promise and Golden Trust properties are located within a region of recent significant gold discoveries. The Golden Promise Property hosts multiple gold bearing quartz veins and quartz vein systems. These properties are located within the Exploits Subzone of the Newfoundland Dunnage Zone. Recent significant gold discoveries within the Exploits Subzone include those of Marathon Gold Corp. (TSX.MOZ) at the Valentine Gold Project, Sokoman Minerals Corp. (TSXV.SIC) at the Moosehead Gold Project and New Found Gold Corp. (TSXV.NFG) at the Queensway Project. Readers are warned that mineralization at the Valentine Gold Project, Moosehead Gold Project, and Queensway Project is not necessarily indicative of mineralization on Great Atlantic’s properties in this region. 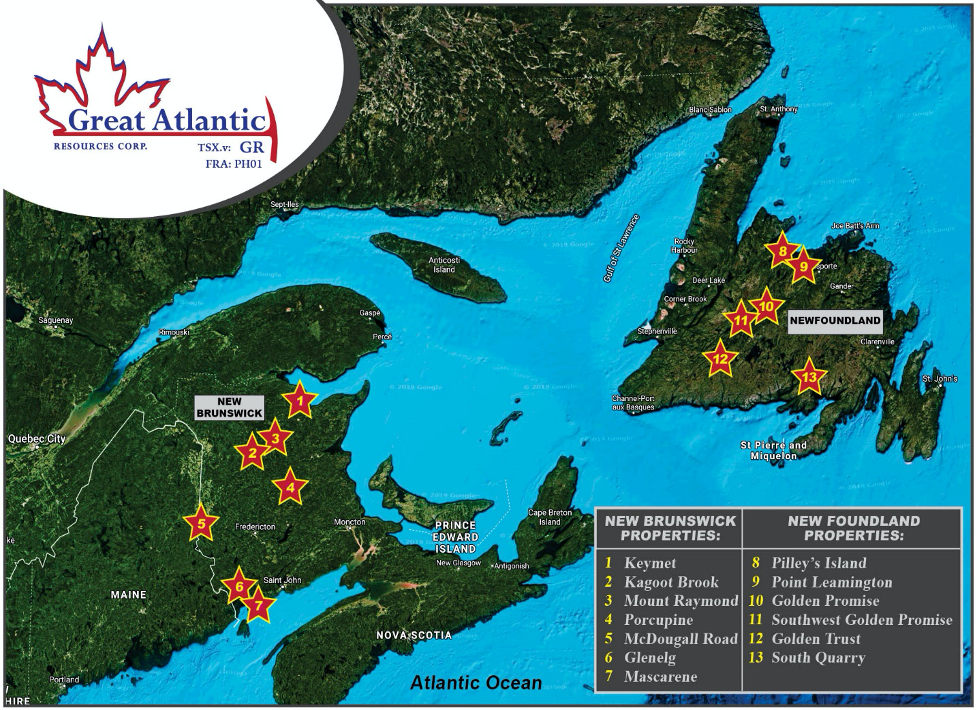 About Great Atlantic Resources Corp.: Great Atlantic Resources Corp. is a Canadian exploration company focused on the discovery and development of mineral assets in the resource-rich and sovereign risk-free realm of Atlantic Canada, one of the number one mining regions of the world. Great Atlantic is currently surging forward building the company utilizing a Project Generation model, with a special focus on the most critical elements on the planet that are prominent in Atlantic Canada, Antimony, Tungsten and Gold.