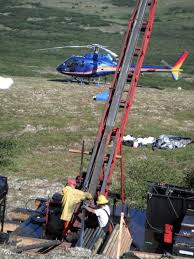 Graphite One Resources Inc. (TSX-V:GPH) (OTCQX:GPHOF) is pleased to announce the commencement of exploration on its 100 per cent  owned Graphite Creek Deposit located near Nome, Alaska, USA.

Anthony Huston, President and CEO stated, “We are very pleased with the terrific progress we have made at Graphite Creek both below surface and above surface in advancing longer lead logistical items and approvals. We continue to work very closely with all Government agencies in Alaska, being one of the United States largest and most prominent mining jurisdictions. The Graphite Creek Deposit is one of the largest known deposits in the world and by far the largest Graphite Deposit in the United States. This comprehensive program will allow the Company to achieve some great milestones towards advancing the Deposit in the coming months as we look forward to adding significant value to our stakeholders “.

The exploration /drill Program will consist of:

Tesla Motors Inc. recently announced plans to build a new $5 billion lithium-ion battery ‘giga-factory’ in the U.S., forecasted to reach production in 2017. As well, co-founder of Tesla, Elon Musk, stated the company “plans to use only raw materials sourced in North America for its U.S. battery factory”. As announced by the State of Alaska’s Department of Natural Resources on March 8, 2013, Alaska’s ranking improved in the Fraser Institute’s 2012/2103 survey of the overall attractiveness of mining investment in 96 jurisdictions around the world from 25th to 19th.

Further, the company is pleased to announce it has completed and closed a $2 million non-brokered private placement with an additional $1.5 MM expected to close in September, 2014.

No new insiders were created, nor any change of control occurred, as a result of the offering. The Company has paid finders’ fees to date in the aggregate amount of $120,887.26 and issued 929,902 non-transferrable share purchase warrants, each such warrant entitling the holder to acquire one additional common share of the Company at the same price as the Warrants described above.

The net proceeds of this offering will be used for exploration and development of the Company’s Graphite Creek project and for general working capital purposes.

Closing is subject to receipt of final applicable regulatory approvals including approval of the TSX Venture Exchange. All securities issued in connection with the private placement will be subject to a restricted period that expires four months following the date of issuance.

China currently produces approximately 70% of the world’s graphite (world production is approximately 1,100,000 tonnes of which 400,000 is flake graphite) and has recently restricted exports by instituting an export tax. As well, the Chinese government has banned any new graphite plants and imposed strict environmental regulations on existing plants in Qingdao. A state owned amorphous graphite monopoly has been formed which will consolidate 210 amorphous graphite mines down to 20 and will reduce production capacity from 600,000 to 510,000 tonnes per year. The implementation of these new rules and standards will make graphite mines much more difficult to build and/or operate in China. Recently, South Graphite, which was formed in 2011 to consolidate all the amorphous graphite resources in Hunan, China (which is the world’s largest graphite producer) and has a total production capacity of approximately 200,000 tonnes per annum.

Graphite is an allotrope of carbon along with diamonds and coal. Graphite is the best known conductor of heat and electricity. Graphite and graphite powder are valued in industrial applications for their self-lubricating and dry lubricating properties. It maintains its strength and stability to temperatures in excess of 3,000 degrees C and is resistant to chemical attack. Graphite demand was historically driven by the steel and automotive industries. Due to the industrialization of BRIC (Brazil, Russia, India, China) economies, Graphite demand has steadily increased by 5% per annum since 2000. Global graphite demand is growing rapidly and is expected to continue based on new applications and green technologies, including but not limited to: hybrid-electric vehicles (HEVs); plug-in hybrid-electric vehicles (PHEVs); battery-electric vehicles (BEVs); fuel cells; Lithium-Ion Batteries; Pebble Bed Nuclear Reactors; lubricants and Graphene.

As global demand grows, graphite prices have increased substantially, more than doubling over the past three years. Both the European Union and the United States have declared graphite a supply critical mineral.