GR Silver Mining Ltd. (TSX-V: GRSL) (FRANKFURT: GPE) (OTCQB: GRSLF) is pleased to report drill results from the underground and surface drilling program in the Plomosas Mine Area, as well as sampling results from historic drilling, at its 100%-owned Plomosas Silver Project in Sinaloa, Mexico.

The underground drilling program is targeting high-grade Ag-Au epithermal mineralization and bulk tonnage-style polymetallic mineralization in the Plomosas Mine Area, with the objective to delineate high margin precious and base metals mineralization for planned resource estimation.

The results of the current drilling program, combined with systematic sampling of historic un-sampled drill core, at the Plomosas Mine Area, continue to delineate extensions of the mineralization previously drilled at level 775 (see News Release dated 5 January, 2021). They have also defined new mineralized zones laterally to previously mined areas with the presence of Au-rich epithermal veins. The drill results demonstrate continued success in the delineation of thick intercepts of Au-Ag-Pb-Zn-Cu mineralization, hosted in a series of hydrothermal breccias showing a strong relationship with structures and intrusions at shallow depth. These relationships indicate a potential association with a much larger epithermal system (Figure 1).

GR Silver Mining President and CEO, Marcio Fonseca, commented, “We have always had a strong belief in the large-scale potential of the Plomosas Project. We continue to outline new mineralized zones in the Plomosas Mine Area, with a series of compelling field and drill results indicating a much larger epithermal system. More recent geochemical and geophysical data, and vectors, suggest the mineralization within the Plomosas Project to be a district-scale system. Surface and underground drilling is continuing, in combination with surface exploration, in the vicinity of both the Plomosas Mine and San Juan Areas as part of our business strategy to delineate additional zones of epithermal veining and hydrothermal breccias.”

The surface and underground diamond drilling program, together with sampling of existing historic core, is designed to delineate new mineralized zones and enhance 3D geological modelling at adequate spacing to support the upcoming resource estimation. The program has been successful in discovering and confirming the continuity of epithermal mineralization throughout the Plomosas Mine Area, in zones previously unexplored.

The drilling results (Table 1) demonstrate the upside potential of the Plomosas Mine Area and show results which are expected to add to the upcoming resource estimation. Table 1 and 2 summarize the most significant assay results for the drill holes reported in this News Release.

The following table (Table 3) summarizes the collar locations for drill holes reported in this News Release.

The drill hole SD-09 represents unmined zones, with underground development/access completed in the past. The polymetallic breccia at this level of the historical workings, reports high Au content together with Pb-Zn mineralization hosted in sulfide rich (Pb-Zn) banded crustiform quartz veinlets.

The drill hole SD-32 represents the eastern limit of the mineralization defined in level 775, and is located between two historical underground developments. It confirmed the presence of a broad, bulk mineable style of mineralization, with widespread concentration of disseminated sulfides throughout the whole 61 m mineralized interval.

Management believes that the large epithermal system at the Plomosas Mine Area is hosted by regional high and low angle structures cross-cutting a suite of acid/basic volcanic units, widely altered to clay minerals visible at surface in some areas (Figure 2). This type of alteration is typical of the upper part of large epithermal systems and could represent additional zones of underlying epithermal quartz veining, similar to veins currently exposed in the historic underground workings. The potential extent of mineralization of these exploration targets is still conceptual in nature, however, provides additional evidence of the large and rich footprint of precious and base metal mineralization in the Plomosas Project.

GR Silver Mining believes that the Plomosas Mine Area is part of a much larger epithermal system supported by field evidence along a 1.2 km strike length. The 2021 underground and surface exploration program aim to delineate maiden resource estimates in two areas, Plomosas Mine and San Juan, as well as discovering new mineralized zones close to the surface in the remaining part of the exploration concessions.

The Company also announces it has received TSX-V approval to the shares for debt transactions previously announced on January 21, 2021 and consequently has issued 141,097 common shares to settle an aggregate debt of $104,412. All shares issued in conjunction with the debt settlements are subject to a hold period expiring June 6, 2021 in accordance with applicable securities laws and the policies of the TSX-V.

The Company has commenced an 11,900 m drilling program with surface holes focused on expanding known mineralization along strike in two initial areas, the Plomosas Mine Area and the San Juan Area. Underground drilling included in the program will target the extension of recent polymetallic discoveries at the lowest level (775 m RL, or ~250 m below surface) of the Plomosas Mine Area and six low sulfidation epithermal veins at San Juan Area. Both areas will be the subject of NI 43-101 resource estimations following completion of this drill program.

The silver and gold mineralization on this Project display the alteration, textures, mineralogy and deposit geometry characteristics of a low sulfidation epithermal silver-gold-base metal vein/breccia mineralized system. Previous exploration was focused on Pb-Zn-Ag-Au polymetallic shallow mineralization, hosted in NW-SE structures in the vicinity of the Plomosas mine. The E-W portion of the mineralization and extensions for the main N-S Plomosas fault remain under-explored.

San Marcial is a near-surface, high-grade silver-lead-zinc open pit-amenable project, which contains a 36 Moz AgEq (Indicated) and 11 Moz AgEq (Inferred) NI 43-101 resource estimate. The Company has filed a National Instrument 43-101 (“NI 43-101”) report entitled “San Marcial Project Resource Estimation and Technocal Report, Sinaloa, Mexico” having a effective date of March 18, 2019 and an amended date of June 10, 2020 (the “Report”). The Report was prepared by Todd McCracken and Marcelo Filipov of WSP Canada Inc. and is available on SEDAR. The company recently completed over 320 m of underground development in the San Marcial Resource Area, from which underground drilling is planned to expand the high-grade portions of the resource down dip. The Company recently discovered additional mineralization in the footwall, outside of the existing resource, and will also be drilling this area. GR Silver Mining is the first company to conduct exploration at San Marcial in over 10 years. The NI 43-101 resource estimate (San Marcial Project – Resource Estimation and Technical Report) was completed by WSP Canada Inc. on March 18, 2019 and amended on June 10, 2020. 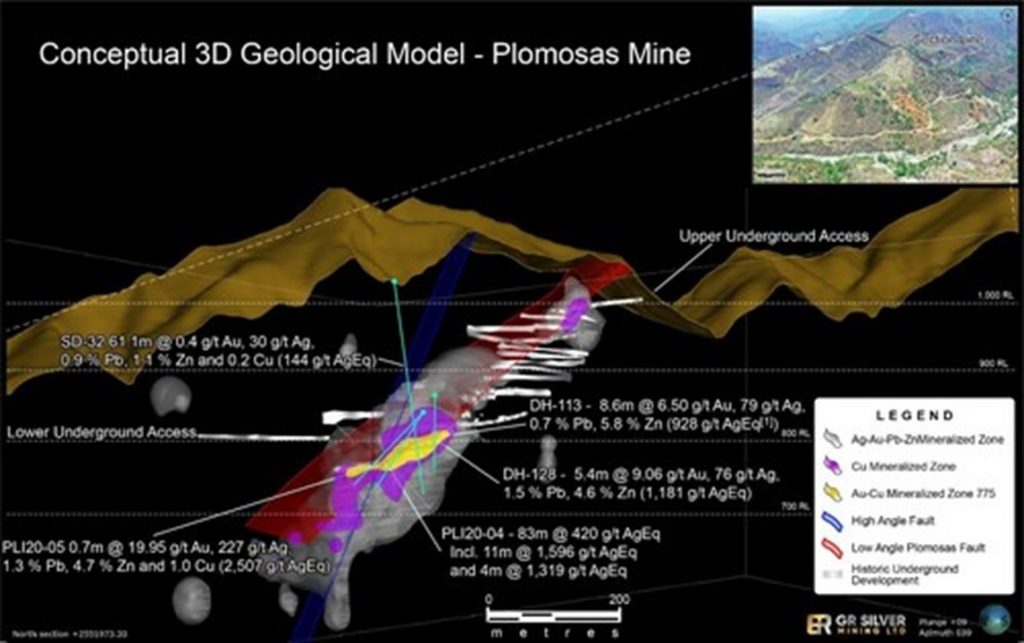 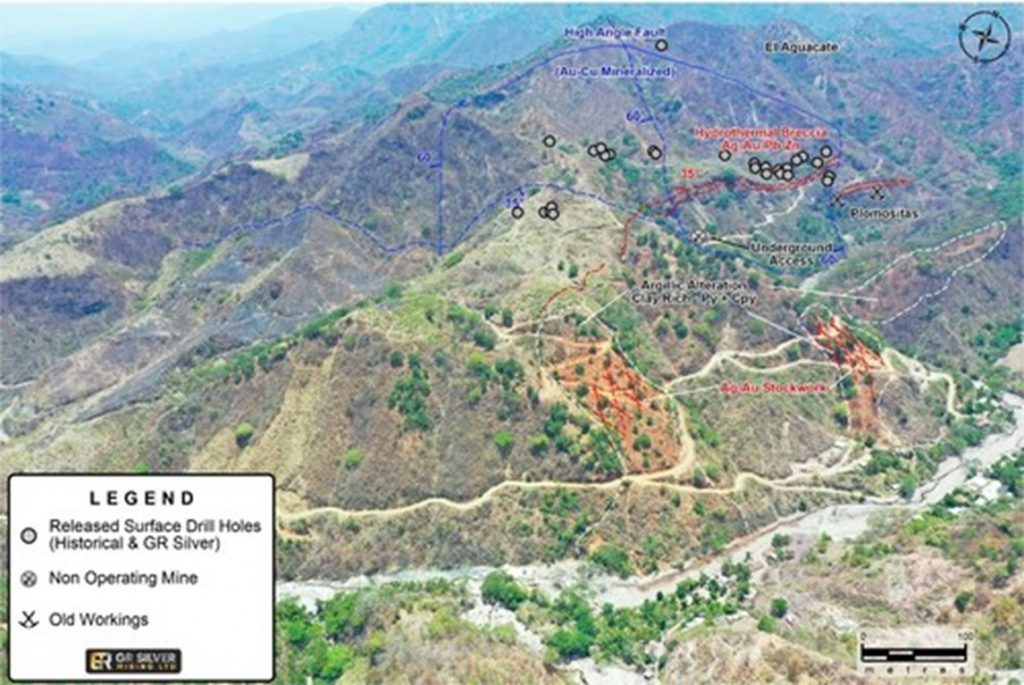