GR Silver Mining Ltd. (TSX-V: GRSL) (FRANKFURT: GPE) (OTCQB: GRSLF) is pleased to announce drill results from the Company’s recently announced surface core drilling program in the Plomosas Mine Area as well as results from the ongoing validation of historic drilling at its 100%-owned Plomosas Silver Project  in Sinaloa, Mexico.

The initial two drill holes completed and released are in the Plomosas Mine Area, targeting  expansion of the mineralization footprint along strike, and confirmation of attractive near surface mineralized zones. The results received confirm the presence of wide, shallow or near surface silver-gold-lead-zinc (polymetallic) veins and hydrothermal breccias. Our ongoing review and validation of historic data on the same sections indicates high grade silver and gold mineralization in low sulphidation epithermal veins outside of the polymetallic silver rich hydrothermal breccia zone. The drilling currently in progress has validated recent geological modelling, confirming near surface zones of wide Ag-Au-Zn-Pb mineralization. Recent access to historic workings near the area being drilled by the Company, together with historic and recently completed drill holes, is being integrated into a 3D model to support the expansion and potential delineation of near surface resources.

The drilling completed to date, together with recently announced results, has delineated a 700 m long mineralized system (Figure 1), consisting of multiple veins. It demonstrates the presence of, not only the polymetallic Pb-Zn-Ag rich hydrothermal breccia hosted on the N-S oriented low angle Plomosas Fault, but also a series of high angle, low sulphidation vein and stockwork systems, commonly on the hanging wall or cross cut by the former hydrothermal breccias.

GR Silver Mining President and CEO, Marcio Fonseca, commented, “First assay results have now been received from GR Silver Mining’s own drilling program at Plomosas. We continue to encounter evidence of a large hydrothermal system at the Plomosas Mine Area with the identification of wide mineralized intervals or high grade zones representing mulltiple mineralization styles and events. Our 3D integration of the recent and historic drilling data has proved valuable in defining the Pb-Zn-Ag mineralized zones, as well as the discovery of several attractive near surface Ag-Au-Pb-Zn zones. The recent recommissioned access to the Plomosas underground mine, together with surface access provide a unique opportunity to guide our surface and underground drilling program in the upcoming months, aiming at further discoveries and delineation of a resource in the area.”

GR Silver Mining is currently advancing its surface drilling program on the two areas marked on Figure 1. The Company recently completed the integration of a previous ground geophysical survey in the area and has advanced its program of underground mapping and sampling.

The initial 4,500 m surface core drilling program is expected to continue through 2020 and has a dual focus: shallow drilling (up to 150 m below surface) to expand the known mineralized zones along strike at the Plomosas Mine and San Juan-La Colorada Areas, and follow-up drilling on several new high-grade Au-Ag low sulphidation epithermal vein occurrences at Yecora and El Saltito (see news release dated July 15, 2020).

The planned  drill sites on the Plomosas Project are located in the Plomosas Mine Area and San Juan Trend areas where historic drilling was completed by previous owners, however GR Silver Mining have outlined un-drilled areas with additional multiple epithermal veins along strike and at shallow depth.

In addition to drill testing the areas with historic drill holes at the Plomosas Project, the Company will also commence initial reconnaissance and surface exploration on 11 priority targets identified as displaying potential for new discoveries.

Table 1 summarizes the most significant drill assay results for this set of drill holes released for the Plomosas Mine Area.

The drill holes in this news release were generated by a core drilling campaign initiated by the Company in Q3/2020 (PLS20-01 and PLS20-02), and historical drill holes completed by Grupo Mexico. Neither of the drill sets were previously released.

Table 2 lists the drill hole intervals previously not sampled (“NS”) for this group of released holes. The Company continues to investigate previous unsampled intervals for evidence of mineralization in the core that warrants additional sampling and assaying.

All numbers are rounded. NS – Core not assayed

All numbers are rounded.

The Company believes that the Plomosas Mine Area is part of a much larger low sulphidation epithermal system as indicated by field evidence along 1.0 km of strike length, where only 400 m of that strike had previously been drilled. This represents an opportunity for the Company’s current surface drilling program to continue discovering new mineralized zones close to the surface.

The Company has implemented QA/QC procedures which include insertion of blank and standard samples in all sample lots sent to SGS de México, S.A. de C.V laboratory facilities in Durango, Mexico, for sample preparation and assaying. For every sample with results above Ag >100 ppm (over limits), these samples are submitted directly by SGS de Mexico to SGS Canada Inc at Burnaby, BC. The analytical methods are 4-acid Digest and Inductively Coupled Plasma Optical Emission Spectrometry with Lead Fusion Fire Assay  with gravimetric finish for silver above over limits. For gold assays the analytical methods are Lead Fusion and Atomic Absorption Spectrometry Lead Fusion Fire Assay and gravimetric finish for gold above over limits.

The recent drill holes completed by First Majestic from 2016 to 2018, followed QA/QC protocols reviewed and validated by GR Silver Mining, including insertion of blank and standard samples in all sample lots sent to First Majestic’s Laboratorio Central facilities in La Parilla, Durango, for sample preparation and assaying. Additional validation and check assays were performed by an independent laboratory at SGS de México, S.A. de C.V. facilities in Durango, Mexico. The analytical methods applied for these recent holes for Ag and Au assays comprised of Fire Assay with Atomic Absorption finish for samples above Au >10ppm and Ag >300ppm and Gravimetric Finish. Pb and Zn were analyzed using Inductively Coupled Plasma Optical Emission Spectrometry. GR Silver Mining has not received information related to the Grupo Mexico QA/QC and assay protocols and at this stage is considering the information historic for news release purposes.

The silver and gold mineralization on this Project display the alteration, textures, mineralogy and deposit geometry characteristics of a low sulphidation epithermal silver-gold-base metal vein/breccia mineralized system. Previous exploration was focused on Pb-Zn-Ag-Au polymetallic shallow mineralization, hosted in NW-SE structures in the vicinity of the Plomosas mine. The E-W portion of the mineralization and extensions for the main N-S Plomosas fault remains under-explored. The Plomosas Silver Project has more than 500 recent and historical drill holes in six areas – Plomosas Mine, San Juan, La Colorada, Yecora, San Francisco and El Saltito. These drill holes represent an extensive database allowing the Company to advance towards resource estimation and potential project development in the near future. In August 2020, GR Silver Mining commenced its drilling program in the area to investigate extensions to known mineralization and to guide new discoveries, part of a planned resource estimation in 2021. 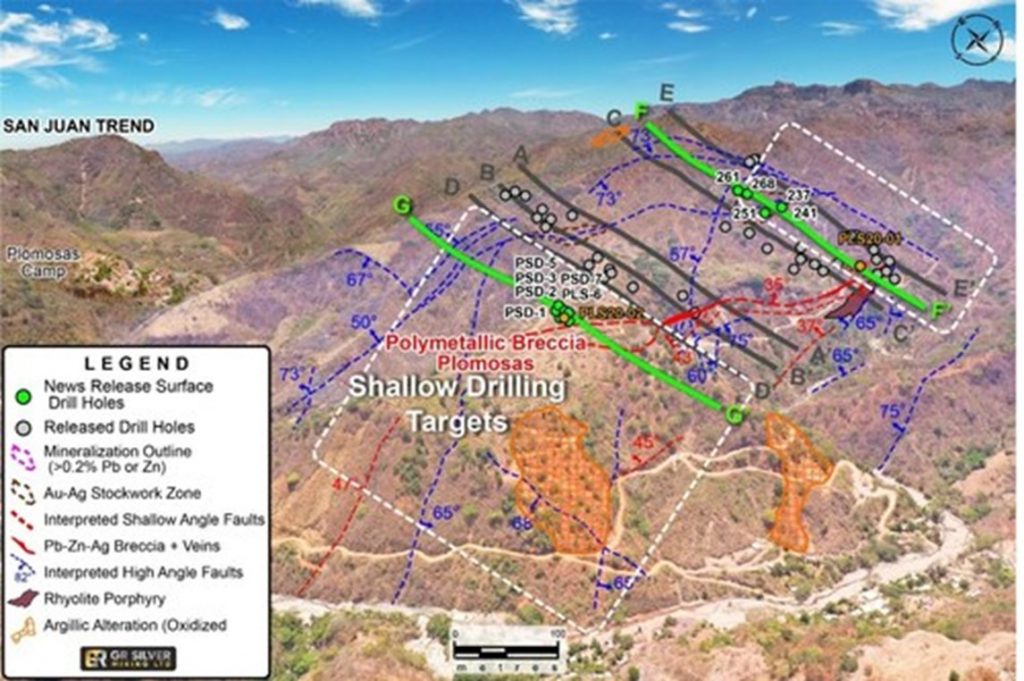