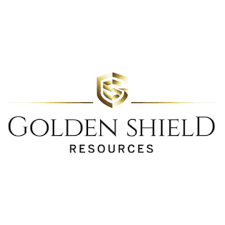 Drill holes MH-22-24, MH-22-25 and MH-22-26 were drilled to test the southern extension of Mazoa Hill Deposit. This area had seen limited historical drilling. Drillhole MH-22-27 was drilled to infill a previously undrilled panel in the northern part of the deposit. Detailed geological logging and interpretative work has shown that a high-grade mineralized envelope (the “Main Zone”) within the Quartz Metachert, plunges shallowly to the south. The Main Zone is interpreted to be down dropped vertically to the south, by a steeply dipping fault (Figure 3). The next (third) phase of drilling will target the down-dropped extension of the Main Zone, as shown in Figure 3.

Since June, Golden Shield geologists at Marudi have been conducting an ongoing trenching program to develop new prospects and advance these and existing prospects to drill stage. A total of 2,010m in 17 trenches have been excavated and 505 continuous chip samples have been taken from bedrock, for which results from 340 samples have been received. Mapping and grab and channel sampling of outcrops and float material has also been ongoing. This work has increased the number of prospects, with favourable QMC host rock at surface, from eight to 13. All of these prospects are summarized in Table 2.

Trenching has mainly focused on two areas, the new prospects of Throne and July (see Figure 4). These prospects appear to form a north-northwest to south-southeast oriented, 1.9 kilometre trend that is coincident with a ridge. The ridge may be indicative of resistive weathering resulting from the comparatively hard QMC lithology. Company geologists are currently exploring for additional QMC in this trend, primarily by trenching, to establish whether these zones could be continuous and to extend it further to the north and south. Further exploration outside of these areas is required to gain an understanding of the full extent and mineral potential of the unexplored portion of the project.

Results for Throne are compiled in Figure 5. Trenching at the Throne target has uncovered QMC over a maximum strike length of approximately 230m and a maximum width of approximately 150m. This compares with a width of 55m and an outcropping strike of 120m at Mazoa Hill. At throne, the saprolite is thought to be the weathered expression of the metavolcanic and metasedimentary units that envelope the QMC. The competent, resistive QMC unit displays cubic boxworks after pyrite suggesting gold values at surface may have been depleted by leaching.

Results for July are compiled in Figure 6, and at this prospect QMC has now been mapped as three lenses over a strike length of approximately 500 m (still open), and a maximum width of approximately 100m. The full extent of the QMC unit is unknown at this time. The QMC unit at July also has a larger areal extent than Mazoa Hill, see Figure 4. At July also, the saprolite is thought to be the weathered expression of the metavolcanic and metasedimentary units that envelope the QMC and a quartz feldspar porphyry intrusion occurs in the north of the prospect. Here also, the QMC unit displays cubic boxworks after pyrite suggesting gold values at surface may have been depleted by leaching.

Golden Shield is planning to commence drilling in mid-September and continue until the Christmas break. Drilling will initially target the southern extension of Mazoa Hill followed by a drill test of the Throne and July prospects as results from Mazoa are awaited, and then return to Mazoa or additional move to test other targets resulting from the ongoing exploration work described below.

Trenching and surface work will also continue through this period, utilizing the Company’s two excavators at site. Additional to this an extensive structural mapping program is planned, as well an Induced Polarization (“IP”) survey. The IP survey will determine whether gold bearing sulphides underlying leached rocks at surface can be detected and mapped remotely. If successful, this will be an important tool in defining and ranking future drill targets.

Colin Porter, VP Exploration of Golden Shield commented, “The discovery of two areas of QMC that are larger than the surface expression of Mazoa Hill and also anomalous in gold, is significant, and extends the trend to the south-southeast of Mazoa Hill some 1.9 kilometres. Surface weather will have diminished the gold levels compared to what may exist at depth, and so the planned drill testing is required to quantify grades and thicknesses. These trenching results highlight the probability that further drill targets are likely to exist at Marudi, and the Company’s ongoing work is designed to locate these.”

Golden Shield Resources was founded by experienced professionals who are convinced that there are many more gold mines yet to be found in Guyana. The company is well-financed and has three wholly controlled gold projects: Marudi Mountain, Arakaka and Fish Creek. Golden Shield continues to evaluate other gold opportunities in Guyana. 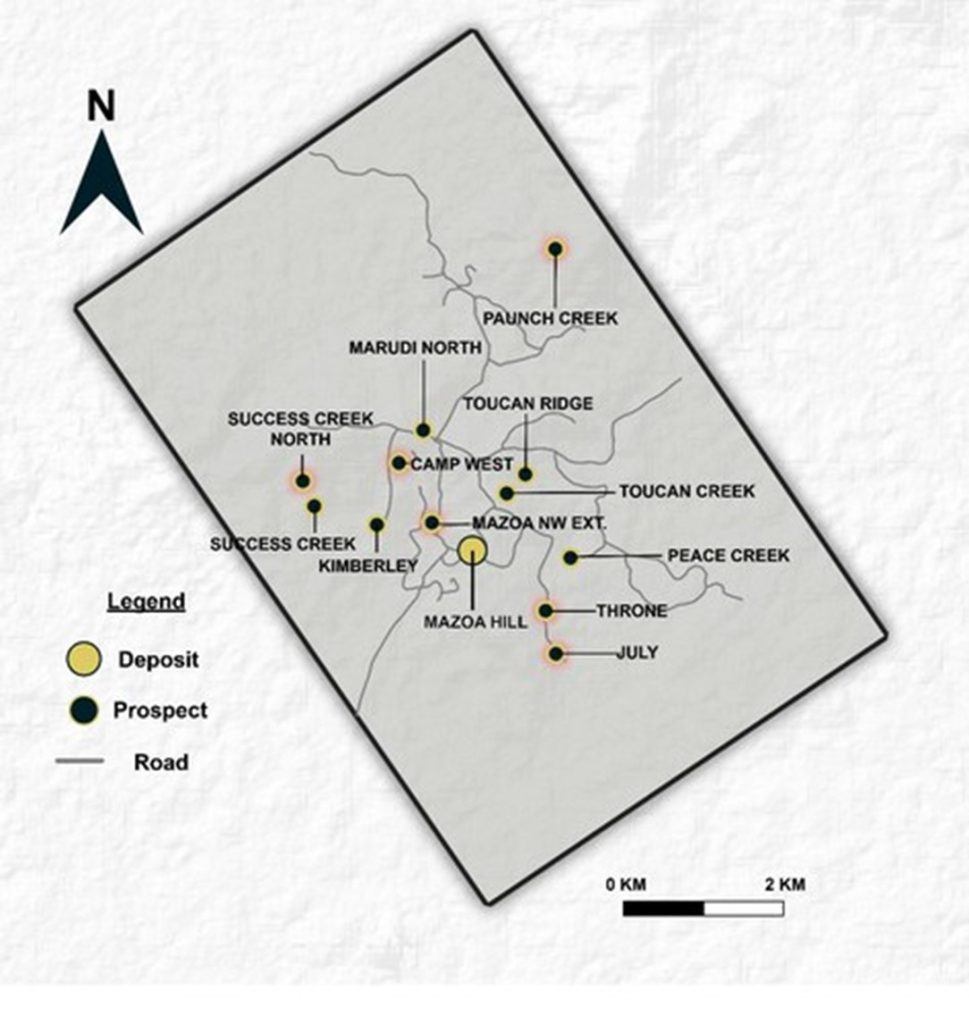 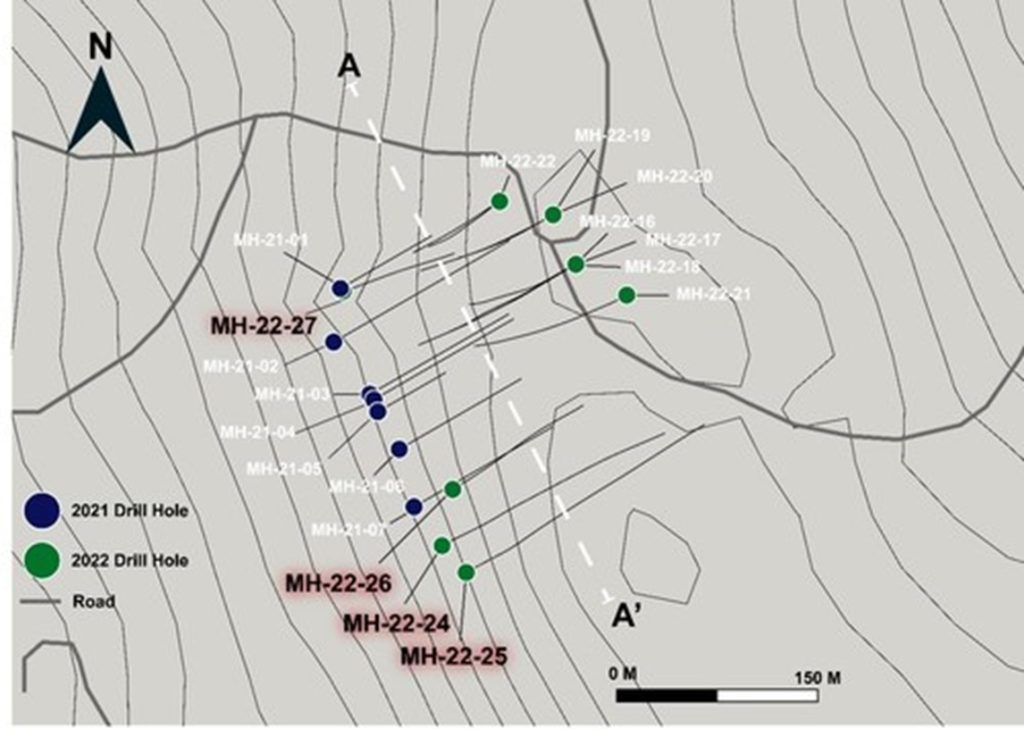 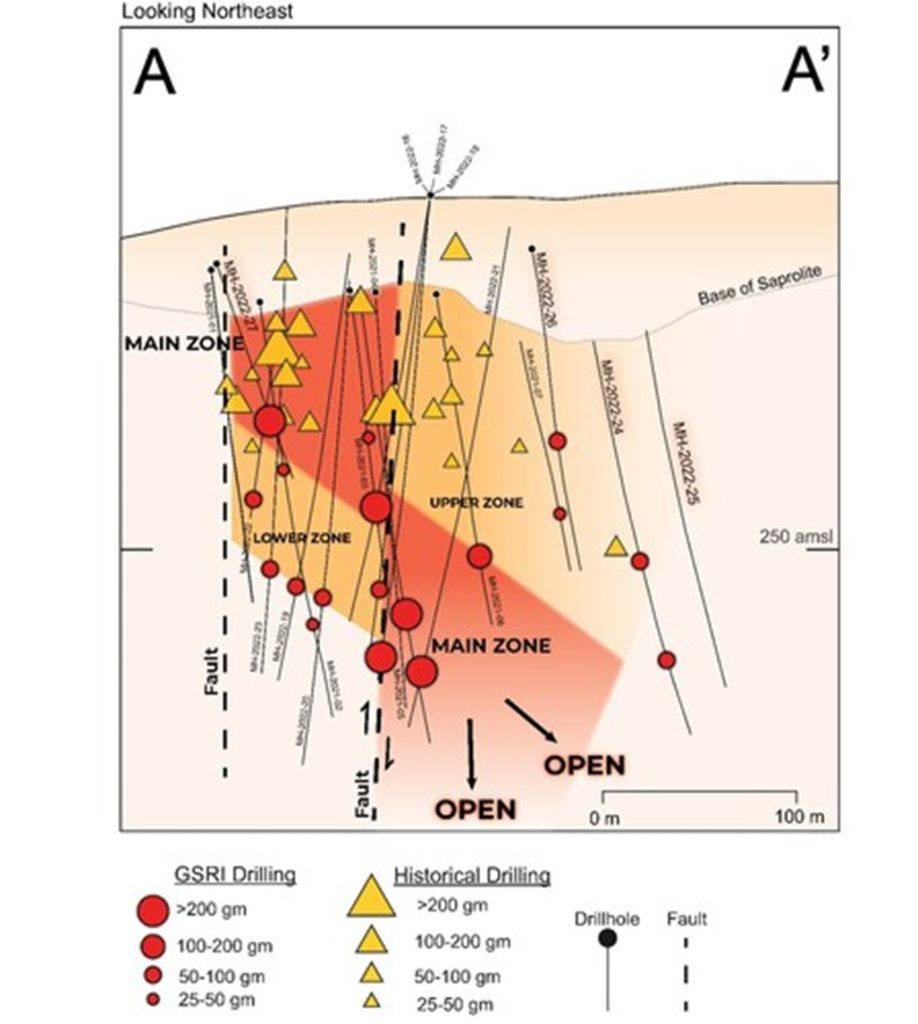 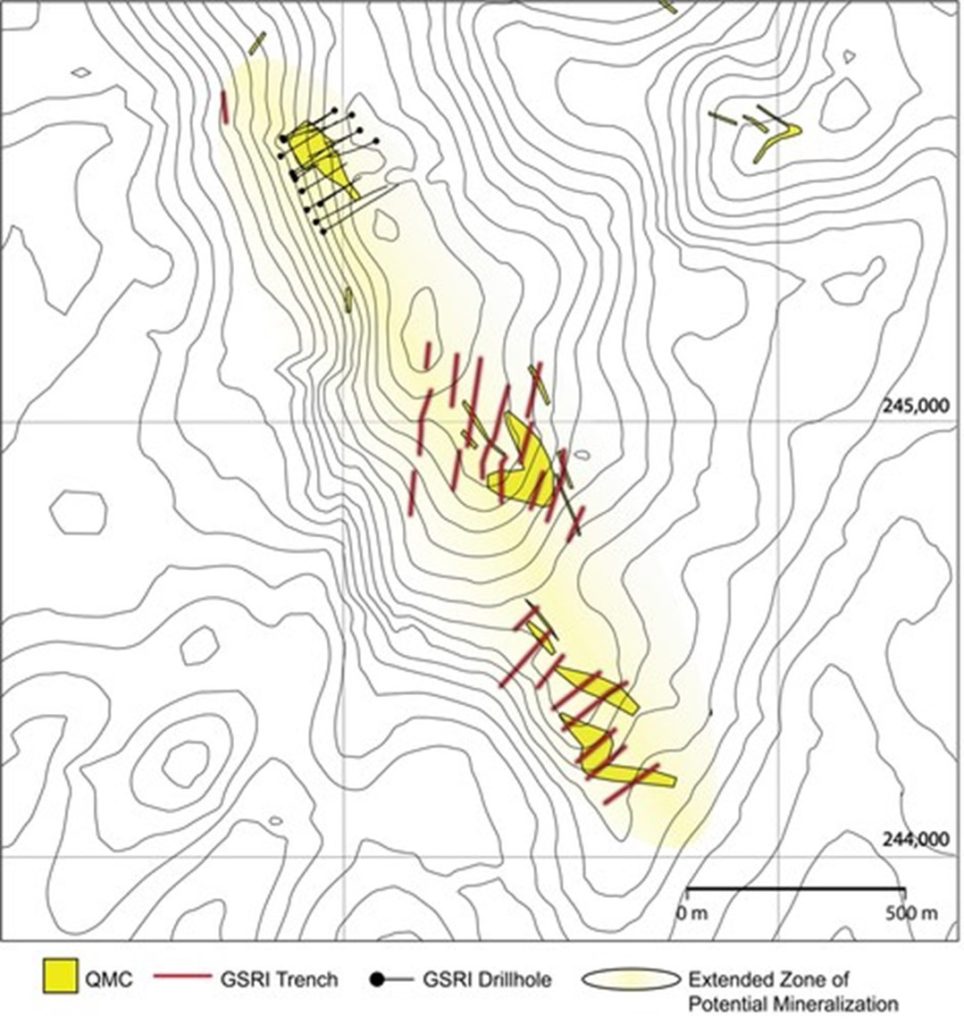 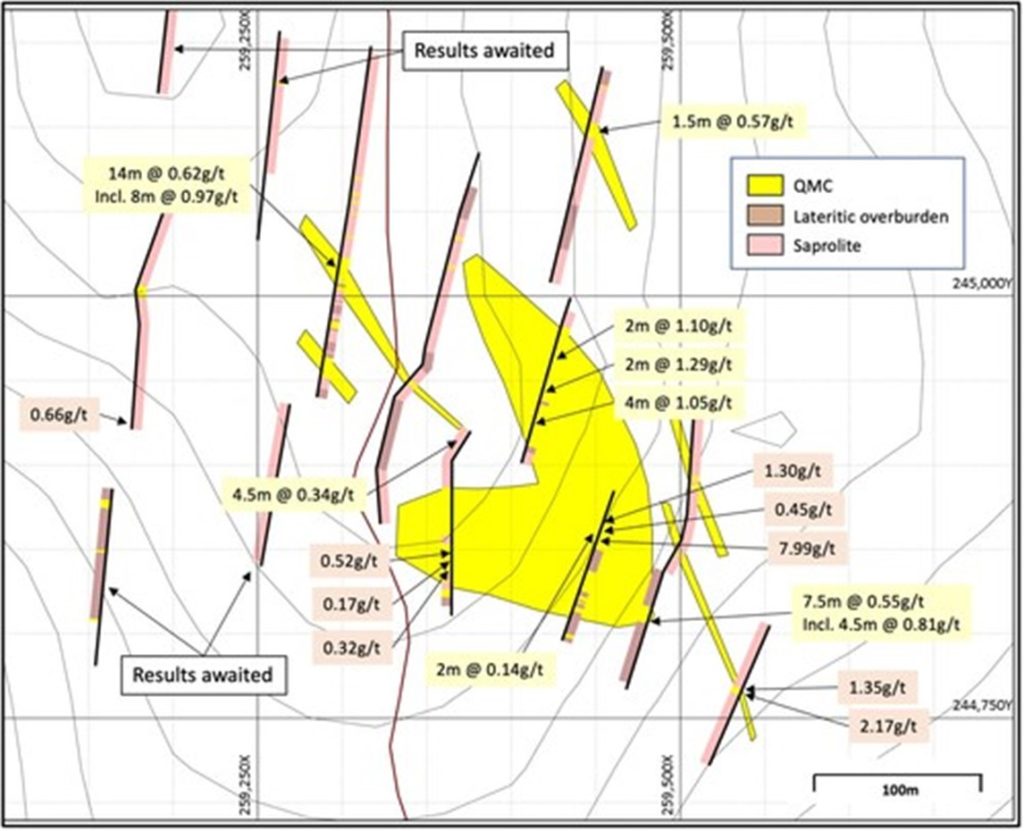 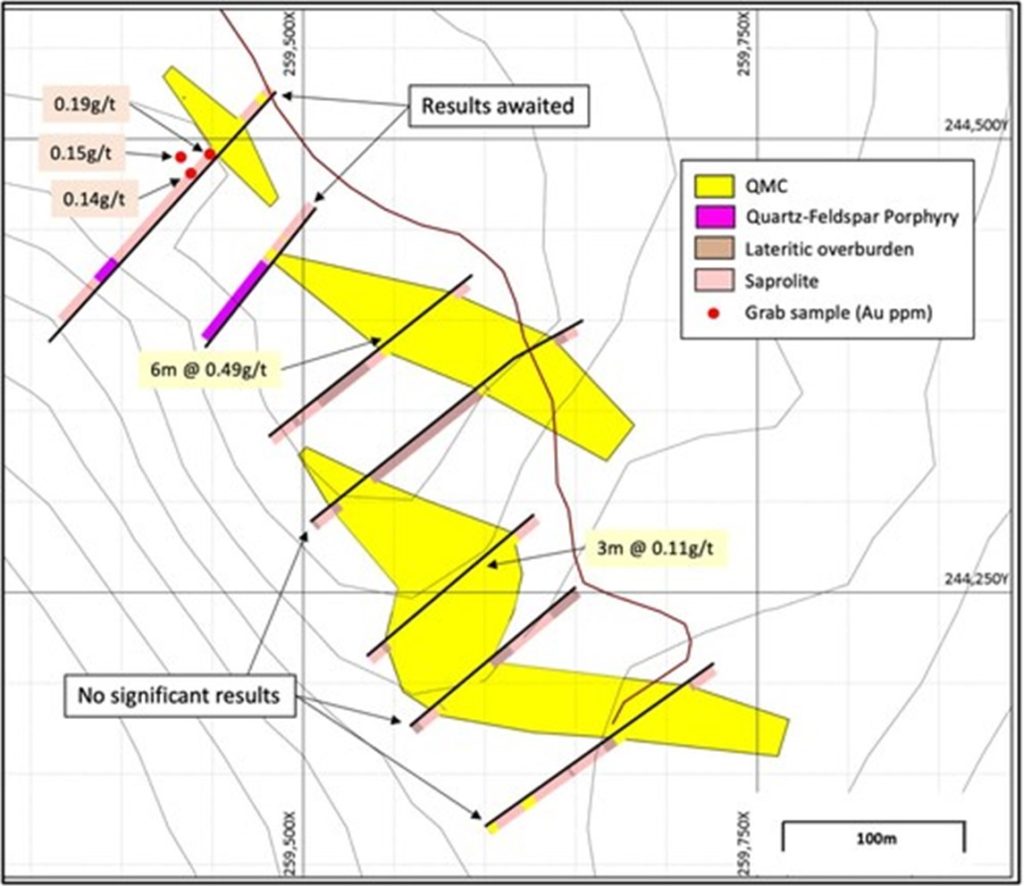