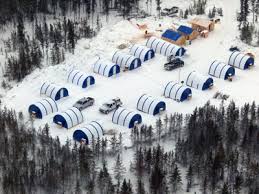 Forum Uranium Corp. (TSX-V:FDC) has commenced drilling on its 100% owned Clearwater Property. Plans are to complete 3,000 metres of drilling to test approximately 11 targets that have been defined by a combination of ground gravity, airborne EM (graphitic conductors) and radon anomalies. A total of 12 to 15 holes are planned with a target depth of 100 to 200m. This project is located on trend and immediately adjacent to the southwest of Fission Uranium’s Patterson Lake South discovery.

The gravity and radon surveys were completed on the northernmost claim in the fall of 2013 and ground EM is currently in progress. Drilling will concentrate on the northern claim in this initial phase of drilling. While targets from airborne geophysical and lake sediment surveys are present in the central and southern claims, further ground gravity, ground EM and radon surveys must be completed prior to drilling.


Forum Uranium Corp. is a Canadian-based energy company with a focus on the acquisition, exploration and development of Canadian uranium projects. Forum has assembled a highly experienced team of exploration professionals with a track record of mine discoveries for unconformity-style uranium deposits in Canada. The Company has a strategy to discover near surface uranium deposits in the Athabasca Basin, Saskatchewan and the Thelon Basin, Nunavut by exploring on its 100% owned properties and through strategic partnerships and joint ventures.