Follow-up Drilling Results from the Planalto Copper Project in Brazil 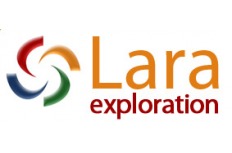 Lara Exploration Ltd. (TSX-V: LRA) is pleased to report drilling results from the Homestead Target at its Planalto Copper Project, located in the Carajás Mineral Province of northern Brazil. Copper-gold mineralization is now recognised to underlie an area with dimensions of more than 350m north-south and 350m east-west and is open down dip to the west of the drill grid.

This recently completed 15-hole diamond drilling program at Homestead (Holes 19-001 to 19-015, for a total of 2,773.55m) comprised primarily infill drilling of the shallower part of the target to fulfill a filing deadline with the National Agency of Mining (ANM). However, a number of the holes also tested north, and south lateral extensions of the significant copper mineralization previously reported from the scout drill program of 2017 and 2018 (see Company releases of April 24, 2018 and June 19, 2018 for details). A further three scout holes (Holes 19-016 to 19-018, for a total of 309.25m) were drilled to test an anomalous copper in soil anomaly just to the south of the main Homestead target, known as the Silica Cap target and likewise returned promising zones of copper mineralization. Results of these 18 drill holes are summarized in the table below.

Copper equivalent values in the table above were calculated using a copper price of US$2.66/lb and a gold price at US$1,300/oz. The intervals reported are down-hole composited at greater than 2m in length, at a 0.3% Cu cut-off and with no more than 4m of internal lower grade intervals.

Interpretation of the drill data in the southern part of the drill grid suggests the presence of a monoclinal structure with 2 to 3 stacked continuous copper zones dipping shallowly to the west, whereas in the northern part of the grid, the data is suggestive that these zones form a broad antiform-like structure which is draped over a north-south trending zone of intense silica-potassium-feldspar-albite alteration of mafic rock protoliths. The copper-gold mineralization is hosted by pervasively altered mafic volcanics and gabbroic intrusives. Porphyritic andesite, alkaline granite and pegmatites form narrow sills or dykes from a few centimeters to as much as 30m thick that cut the mafic rocks. The andesite shows locally intense brittle fracturing and is mineralized albeit at lower copper grades than in the mafic rocks.

The main alteration minerals are potassium-feldspar, albite, magnetite, biotite, chlorite, calcite, epidote and quartz. The main zones of copper mineralization are mostly associated with intensely chloritized altered mafic rocks. Chalcopyrite is the only copper mineral identified and occurs as disseminations or in veins and veinlets, stockworks and breccias with chlorite-epidote, carbonate, quartz and potassium-feldspar-magnetite, with trace pyrite at the periphery of the system.

The Company completed and filed a Final Exploration Report with the ANM at the end of May and once this has been approved, plans geophysical surveys and additional step-out drilling on the down dip extensions of Homestead and to advance other targets tested in this last program.

All the drill core cutting, and sampling was carried out by or under the supervision of the company’s Vice President Exploration and the chain of custody of the drill core from the Project area to the Company’s sample preparation facility in Canãa dos Carajás was continuously monitored. Sample intervals for the drill core were mostly maintained at about 2m with some variation in the weathered saprolite zones and at times guided by the degree of copper mineralization. Blank and certified gold and copper reference materials were inserted at approximately every 20th sample.

The core samples were delivered by company personnel to the SGS-Geosol and Intertek laboratories located in Parauapebas, 65 km to the north from the Project, where they were crushed and pulverized. The sample pulps for drill hole 19-001 were dispatched by SGS-Geosol to their analytical laboratory at Vespasiano near Belo Horizonte, Minas Gerais State, Brazil. The pulps were subjected to multi-acid digestion with copper and 36 other elements were determined by ICP. Gold was determined by fire assay fusion and an atomic absorption (AAS) on a 50-gram charge.

Sample pulps for drill holes 19-002 to 19-018 were prepared and analysed at Intertek in Parauapebas. The pulps were subjected to Agua Regia digestion and copper was determined by Atomic Absorption. Gold was determined by fire assay and an atomic absorption (AAS) on a 50-gram charge. Intertek carried out specific gravity measurements on fresh drill core for four drill holes giving a good representation of the variations of densities of the host lithologies and mineralized zones across the target area.

About the Planalto Project

The Planalto Copper Project comprises 4,726 hectares of exploration licenses covering meta-volcano-sedimentary sequences and intrusives of early Proterozoic-age with IOCG-type mineralization, located near Vale’s Sossego copper mine and Oz Minerals Antas copper mine, in the Carajás Mineral Province of northern Brazil. Lara has the option to purchase 100% of the Planalto Project by making staged cash payments totaling US$500,000 (US$100,000 paid to date) and paying a 2% NSR royalty on any production (Lara retains the right to purchase 50% of this royalty for a cash payment of US$2 million).

Lara has a staged earn-in agreement with Capstone Mining Corp., (see Company news release of February 4, 2019 for details), whereby Capstone can earn up to a 70% in the Project by funding exploration, feasibility studies and electing to finance, build and operate a commercial mining operation, with Lara repaying its pro-rata share of the production financing out of cash flow.