Filo Mining Corp. (TSX-V:FIL) (Nasdaq First North Growth Market: FIL) is pleased to announce additional assay results from the recently completed 2019/2020 drill program at its 100% owned Filo del Sol project located on the border of Region III, Chile and San Juan Province, Argentina.  Partial results from the program were previously released on January 6 and February 20.  A total of eight diamond drill holes and thirteen RC holes were drilled during the program which ended in late March.  The drill program was curtailed prior to scheduled completion due to travel restrictions imposed in Argentina, and several of the holes were stopped short of their planned depths.  These holes were left in condition to re-enter and deepen during the next drill campaign.  Complete results for five of the diamond drill holes and eleven of the RC holes are shown below, assays for the remaining holes are pending and will be released when received.

Commenting on the results, CEO Adam Lundin stated, “With the results of this past season’s drilling, the true size of the Filo del Sol mineralized system is becoming apparent.  We now have three holes in excess of 1 kilometre long spanning a north-south distance of 1 kilometre and have still not drilled out of mineralization. These holes are within an area where we have drilled continuous mineralization over a north-south distance of almost 5 kilometres, from FSDH035 in the south to VRC093 in the north.  This area contains our 425 million tonne indicated resource, but clearly the extensive scale of this system has yet to be defined.  Of course, size is only one part of the story, and these recent holes continue to intersect impressive copper, gold and silver grades within and beyond the current resource.”

Detailed results are presented below:

Hole FSDH032 was collared on section 9000N at an angle of -70 degrees towards the west and was drilled to a final depth of 1,141 metres.  The hole exits the pit shell which defines the current resource at 378 metres, and the entirety of the hole below this depth is outside of the resource.  The hole ended in mineralization.  This hole intersected strongly altered rhyolite and, towards the bottom, granite country rock cut by an intense stockwork of quartz veins.  Various phases of altered and mineralized porphyry were intersected at depth, visually similar to the mineralized porphyries seen at surface in the Tamberias sector to the south.  Several sections of mineralized breccias occur throughout the hole.  The mineralization intersected here is completely open to the north and at depth.

Hole FSDH033 was collared 200 metres to the south of FSDH032, on section 8800N, and drilled to the west at an angle of -70 degrees.  The hole was lost due to ground conditions at a final depth of 552 metres.  This hole is 72 metres to the east of, and parallel to, hole FSDH030 which was drilled during the 2018/2019 season (see Filo News Release dated May 28, 2019) in order to test the area below the strong mineralization in FSDH030.  The hole exits the mineral resource pit shell at a down-hole depth of 422 metres and ends in mineralization.  Overall, the mineralization in this hole correlates very well with that seen in FSDH030, including a 20 metre section of high-grade silver mineralization.  Mineralization here is contained in rhyolite country rock with varying degrees of brecciation.

Hole FSDH034 was collared 300 metres to the south of FSDH033 and 500 metres south of FSDH032, on section 8500N and drilled towards the west at an angle of -73 degrees.  It was designed to test the area below FSDH028, drilled during the previous drill season, which ended in high-grade mineralization (last 67.5 metres at 0.61% Cu and 0.68 g/t Au; see Filo news release dated May 17, 2019).  FSDH034 was stopped in mineralization at a final depth of 1,106 metres after intersecting strongly altered and stockworked rhyolite and, at depth, granite country rock.  Both lithologies are cut by several porphyry intrusive intervals and various breccias.  The hole exits the mineral resource pit shell at a down-hole depth of 320 metres and is entirely outside the current mineral resource below this depth.

Hole FSDH035 was collared 3,170 meters to the southwest of FSDH032 and drilled to the east at an angle of -67 degrees to a total depth of 208 metres.  The hole is entirely outside of the mineral resource.  It intersected rhyolite country rock with strong silica alteration and included a short section of copper mineralization.  Drilling issues prevented the hole from being completed to its planned depth, but the alteration and mineralization seen here indicate the system is still active and there is potential to extend the deposit to the south.

Hole FSDH036 was a step-out hole 200 metres to the north of FSDH032.  The hole was intended to test the mineralization extending to the north of FSDH032, and below an intersection of 88 metres of 0.49% Cu and 0.41 g/t Au at the bottom of RC hole VRC071 drilled to a depth of 406 metres in 2014.  FSDH036 was stopped at a depth of 367.1 metres when the program was curtailed.  The hole intersected 52 metres at 0.32% Cu and 0.35 g/t Au at about the elevation of the mineralization in VRC071 but was stopped just above the beginning of the main mineralized intersection in FSDH032.  This hole will be completed during the next drill campaign.

RC holes VRC166 through VRC176 were drilled to the southwest of the resource area to test for an extension of the oxide part of the Filo del Sol deposit suggested by surface mapping and re-interpretation of geophysical data.  Although no significant mineralization was encountered by most of these holes, strong silicification and locally anomalous pathfinder elements are consistent with the uppermost levels of the system, and potential for mineralization at depth remains to be evaluated.  Hole VRC176 intersected a shallow zone of gold oxide mineralization (26m of 1.03 g/t Au) 123 metres to the west of the nearest previous intersection.

Complete assays for the remaining holes from this season’s campaign will be released once all data has been received and verified.

The field program is being carried out under the supervision of Bob Carmichael, B.A.Sc., P.Eng. who is the Qualified Person as defined by NI 43-101.  Mr. Carmichael is Vice President, Exploration for the Company and has reviewed and approved the technical information contained in this news release.  Samples were cut at Filo Mining’s Batidero camp near the project site by Company personnel.  Diamond drill core was sampled in 2 metre intervals (except where shortened by geological contacts) using a rock saw for sulphide mineralization.  Oxide mineralization was cut with a core splitter in order to prevent dissolution of water-soluble copper minerals during the wet sawing process.  Core diameter is a mix of PQ and HQ depending on the depth of the drill hole.  Samples were bagged and tagged at camp, and packaged for shipment by truck to Copiapo, Chile.  Samples were delivered to the ALS preparation laboratory in Copiapo where they were crushed and a 500g split was pulverized to 85% passing 200 mesh.  The prepared samples were sent to the ALS assay laboratory in Santiago, Chile for copper, gold and silver assays, with a second split sent to the ALS laboratory in Lima, Peru for multi-element ICP and sequential copper analyses.  ALS is an accredited laboratory which is independent of the Company.  Gold assays were by fire assay fusion with AAS finish on a 30g sample.  Copper and silver were assayed by atomic absorption following a 4 acid digestion.  Samples were also analyzed for a suite of 36 elements with ICP-ES and a sequential copper leach analysis was completed on each sample with copper greater than 500ppm (0.05%).  Copper and gold standards as well as blanks and duplicates (field, preparation and analysis) were randomly inserted into the sampling sequence for Quality Control.  On average, 9% of the submitted samples are Quality Control samples.  No data quality problems were indicated by the QA/QC program. 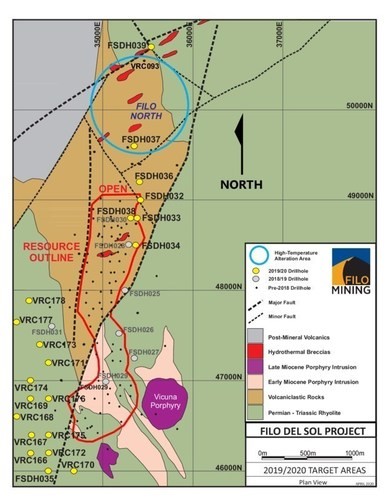 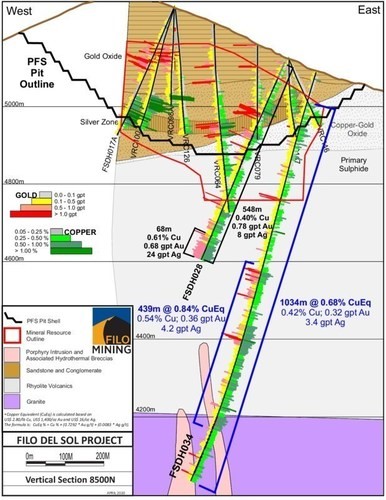 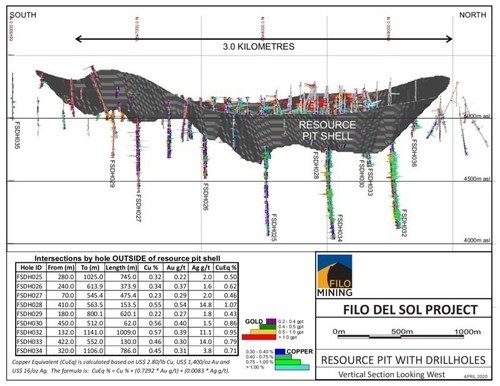