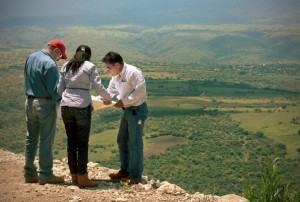 On February 25, 2013, the Company announced that it had entered into a binding letter agreement with Pan American in respect of the Transaction, pursuant to which, in addition to other terms, the Company will acquire a portfolio of advanced stage gold projects including the La Bolsa project in Mexico, the Pico Machay project in Peru, the Calcatreu project in Argentina and certain related mining claims in the United States in consideration for the Company issuing to Pan American 50,900,000 common shares and 10,000,000 warrants.

The parties have agreed to amend the proposed terms of the Warrants to be issued as part of the consideration under the Purchase Agreement to add a callable feature and to amend the exercise price. Each Warrant will now entitle Pan American to purchase one common share of the Company at a price of $1.20 for a period commencing on the closing date of the Transaction and expiring on the fifth anniversary of the Closing. The Warrants will be callable after three years from the Closing if at any time the volume weighted average trading price of the Company’s Common Shares on the TSX-V is greater than $1.50 per Common Share for 20 out of the 30 consecutive trading days.

The transactions contemplated by the Initial Definitive Agreements remain subject to the Closing.

In addition, the Company has finalized the form of an “Investor Rights Agreement” and a “Standby Credit Agreement”. The Company and Pan American will enter into the Additional Definitive Agreements on the closing of the Transaction.

Closing of the Transaction and Shareholder Meeting

The Transaction, including the Offering and the Acquisition, is now expected to close during the third quarter of 2013 and is subject to certain conditions including, but not limited to, receipt of all necessary regulatory approvals, the approval of the shareholders of Esperanza and the approval of the TSX Venture Exchange.

Esperanza is a precious metals exploration and development company focused on advancing its principal property, the wholly-owned Esperanza gold project (formerly referred to as the Cerro Jumil gold project) in Morelos State, Mexico.