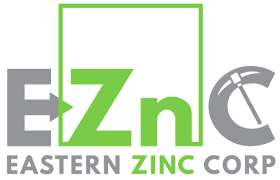 Eastern Zinc Corp. (CSE:EZNC) (OTC:ETZCF) is pleased to report the assay results from two diamond drill holes completed in early September on its Portage Property located in the western part of the Bathurst Mining Camp in New Brunswick (Figure 1). Holes PZ19-03 and PZ19-04 were designed to test the depth and strike potential 40 metres below and 400 metres to the north, respectively, of the Upper Road Zone volcanogenic massive sulphide occurrence discovered by a previous operator in 2018.

A summary of significant assay results from the Portage drilling program are shown in Table 1:

Note: Intervals shown are measured core lengths and true widths are estimated to be 75% of the reported intervals. The Company and its geological consultants are not aware of any drilling, sampling, recovery or other factors that could materially affect the accuracy or reliability of the assay data disclosed herein. Core recoveries were approximately 100% and no sampling issues were reported by the core logging geologist.

The location and total depth of each drill hole is shown in Table 2 and Figure 2:

Figure 1: Map of Eastern Zinc’s Portage mineral claims in the Bathurst Mining Camp is available at

Table 2: Location of the 2019 Portage drill holes in the Upper Road Zone prospect

Figure 2: Map of the 2019 Portage drill holes targeting the Upper Road Zone is available at

The drill holes were surveyed using a Reflex downhole survey tool to measure dip and magnetic bearing at 30m intervals. Magnetic bearing was corrected to azimuth readings. The Portage drilling results indicate the presence of variable zinc-lead mineralization in volcano-sedimentary rocks over a strike length of 370m. Mineralization is spatially associated with a conductive graphitic horizon. Future drilling at Portage will continue to focus on areas where soil geochemical anomalies are associated with conductive horizons identified from existing airborne surveys.

Paul Ténière, President and CEO of Eastern Zinc Corp commented, “These positive drilling results from our initial Portage drilling program have confirmed the presence of zinc and lead mineralization at relatively shallow depths and continue to be an indication of VMS-style sulphide mineralization in the Upper Road Zone. These results will help determine future sites for drilling on the Portage claims and expand our understanding of potential VMS mineralization across our other mineral claims in the Bathurst Mining Camp.”

The Company plans to complete trenching and prospecting on several of its other BMC mineral claims this fall to help determine future sites for ground geophysics and diamond drilling.

Background on the BMC Properties:

The Portage Property is part of a portfolio of mineral properties owned by Eastern Zinc Corp. and located in the Bathurst Mining Camp of New Brunswick (see August 20, 2019 EZNC news release). The BMC is one of the most prolific base metal mining districts in Canada that hosts over thirty volcanogenic massive sulphide deposits, as well as dozens of lesser showings (source: NBDNRE Open File 2000-9).

The Portage Property is underlain by north-easterly trending Ordovician volcano-sedimentary rocks of the California Lake Group and overlain unconformably to the west and north by Siluro-Devonian volcanic and sedimentary rocks. The “Portage Zone” comprises a tabular, stratabound zone ranging from 15 to 60 m thick in the upper part of felsic lapilli tuffs of the Mount Brittain Formation. Disseminated and stringer pyrite with variable lead-zinc and copper mineralization can occur within these chloritized felsic lapilli and ash tuffs. Sulphide stringers are generally less than 10 cm, but can occur as massive seams up to 3 metres thick. The “Upper Road Zone” occurs just beneath the unconformity at a depth of approximately 150 m based on historical drilling. The Upper Road Zone is comprised of VMS lead-zinc mineralization hosted by a chloritized mafic fragmental unit at the structural top of a 50 m thick sequence of Boucher Brook sediments. At deeper depths mafic tuffs and fragmentals are typically found followed by felsic lapilli tuffs that host the Portage Zone. This stratigraphic sequence suggests the Tetagouche units may be overturned and structurally deformed. This is supported by graded beds and by the distribution of copper mineralization in most of the Portage Zone intercepts drilled by previous workers.

Numerous airborne geophysical surveys employing electromagnetic and magnetic methods have played a key role in the discovery of volcanogenic massive sulphide (VMS) deposits in the Bathurst Mining Camp, including assisting in the discovery of the Brunswick No. 12 deposit (source: NBDNRE Open File 2000-9). The Brunswick No. 12 mine was one of the world’s largest underground zinc mines and produced 137 million tonnes grading 8.74% zinc, 3.44% Pb, 0.37% Cu, and 102 g/t Ag between 1964 and 2013 (source: New Brunswick Department of Energy and Resource Development, Brunswick No. 12 mine production statistics).

The Eastern Zinc BMC properties include other potential VMS mineral occurrences discovered and drilled by previous operators including the former Wedge mine, West Wedge, Tribag, Essex and A’Hearn targets. The Satellite and Mowatt targets are located adjacent to the former Heath Steele mine. The BMC properties also include the LBM mineral trend where several discoveries were made by previous operators in the region in volcano-sedimentary rocks extending 5 km west and northwest from Trevali Mining Corp’s Halfmile deposit.

The Portage drilling program was supported in part by a grant of $40,000 under the New Brunswick Junior Mining Assistance Program (“NBJMAP”). The Company wishes to thank the Government of New Brunswick and the Ministry of Natural Resources and Energy Development (Energy and Mines Division) for this recognition of the Portage project and its importance to the mining industry in New Brunswick.

Geological consultants from SLAM Exploration Ltd. were responsible for the design and implementation of the drilling program including following a strict QA/QC program consistent with mining industry best practices. Core was delivered to a secure location for logging and sampling. All drill core was logged and selected core was marked for sampling and sawing. The Company also inserted a blank and a certified standard into the sample series. A total of 24 core samples were shipped to AGAT Laboratories (“AGAT”) of Mississauga, Ontario for analysis. AGAT analyzed all 24 samples using (201-378) Sodium Peroxide Fusion – ICP-OES/ICP-MS Finish. AGAT is independent of Eastern Zinc Corp. and is accredited to ISO/IEC 17025:2005 and ISO 9001:2015 standards.

All samples received by AGAT were dried to 60°C then crushed to 75% passing 10 mesh (2mm) and split to 250 g using a Jones riffler splitter or rotary split. Samples were pulverized to 85% passing 200 mesh (75μm). All equipment was cleaned using quartz and air from a compressed air source. Blanks, sample replicates, duplicates, and internal reference materials (both aqueous and geochemical standards) were routinely used as part of AGAT Laboratories’ quality assurance program. Samples (0.2g) were fused with sodium peroxide and sodium hydroxide in a muffle furnace for 30 minutes. The resultant cake was dissolved in dilute nitric acid and completed to 100ml with de-ionized water. Perkin Elmer 7300DV/8300DV ICP-OES and Perkin Elmer ELAN 9000/NexION ICP-MS instruments were used in the analysis. Inter-Element Correction (IEC) techniques were used to correct for any spectral interferences.

Eastern Zinc is a Canadian junior mining and exploration company operating out of Vancouver, British Columbia. Eastern Zinc is engaged in the business of acquiring, exploring and developing natural resource properties with a focus on zinc properties/projects.