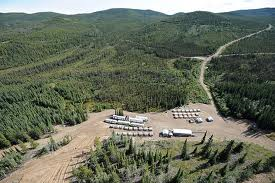 Copper North Mining Corp. (TSX-V:COL) announces the resumption of exploration, and early success, on the Carmacks Project in north central Yukon. The exploration is focused on extending the known mineral resources in an effort to expand the current measured and indicated mineral resources, as a first step in increasing potential mine life. Following a review of historic data at Carmacks, two areas were selected as having potential for a significant increase of mineral resources. Initial trenching of the Zone 2 target has been very successful.

Previous exploration on the Carmacks property defined 16 mineral zones. A review of these zones and other anomalies identified two prime targets for the initial focus of resource expansion. Trenching commenced August 11 in the Zone 2 target area and has expanded the area of known copper oxide resources. Oxide copper mineralization is readily visible as the copper carbonate minerals malachite and azurite are distinctive green and blue in color.

The Zone 2 area is located approximately 2,500 metres to the north of the north end of Zone 1: the proposed open pit area. The northerly trending mineralization of Zone1 appears to be offset on a cross fault. If the sense of movement on the cross-fault is right lateral, the Zone 2 area may represent the continuation of the Zone 1 structural trend; if this interpretation is correct, it opens up a 2,500 metre long target.

Initial trenching has extended to the southeast, the known extent of mineralization from 100 metres to 500 metres. The oxide copper mineralization has been observed in five trenches. The full width of the mineralization is not yet determined due to permafrost restrictions. The discovery trenches will be extended as the permafrost melts with removal of the cover materials. Trenching is continuing in this area as the zone is open to the southwest; and to the northwest of the discovery trench area where the mineralized structure has been offset by a fault that has now been identified in a new trench.

Both Zone 1 and 2 were discovered by prospecting in 1971. Little work was done on Zone 2 following geochemical and geophysical surveys, and trenching. Evaluation of a trench on the Zone 2 discovery outcrop indicates a south easterly trend steep dipping mineralized structure. Historic sampling of the discovery trench returned 1.0% copper over 45.7 metres within the sheared granite that hosts almost all mineralization at Carmacks.

Three lines of induced polarization geophysics were completed south of the Zone 2 discovery area in 2007. The geophysics defined multiple sub-parallel zones of increased chargeability and low resistivity, characteristic of the sulphide and oxide mineralization in other zones. The Zone 2 showing and three geophysical lines define a southeast trending target.

Geophysical survey work is planned to the southeast of the Zone 2 discovery area to provide a better understanding of the approximate remaining 2000 metres of strike length to the interpreted cross-fault that is thought to offset the Zone 1 mineralization. It is also planned to complete several lines of geophysical survey to fill in gaps between previous geophysical data in the gap between Zone 1 and the 2000S zone.

Dr. Harlan Meade, President and CEO states: “The early success of the exploration work is very encouraging and is defining attractive drill targets. The Company is considering a drill program to commence in September to define new mineral resources. The expansion of oxide mineral resources would be a very positive development in the re-engineering of the Carmacks Project.”

Copper North is a Canadian mineral exploration and development company. Copper North’s assets include the Carmacks Project located in the Yukon, the Thor property in British Columbia, and the Redstone property located in the Northwest Territories.